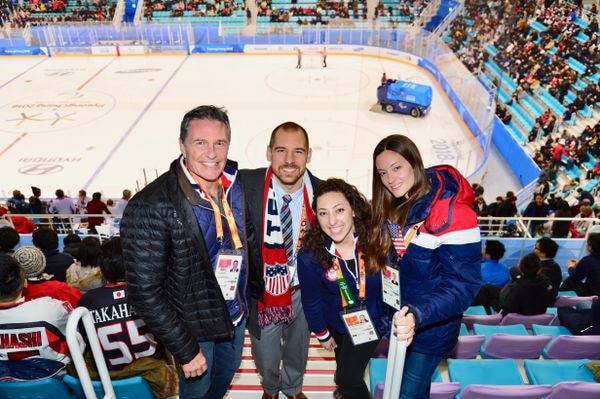 Beau Miller (center left) supporting the U.S. Presidential Delegation to the 2018 PyeongChang Paralympic Winter Games. (Courtesy Photo)
JACKSON, MI — When a person escapes North Korea, they gain freedom but they face other obstacles, like learning English and unlearning propaganda against the western world.
Beau Miller, whose parents live and work in Jackson, is a public diplomat [JB emphasis] and informant in Seoul who helps defectors once they reach South Korea. He also helped launch an English Access program, which teaches North Korean defectors the language and adjust to their new life, he said.
Miller and his colleagues won the prestigious Gears in Government award on April 30 for his work launching the program. It was a surprise to win because it’s the program’s first year, Miller said.
“It was nice to be acknowledged,” Miller said. “The work itself is incredible. I came (to Seoul) four years ago and it’s been a wild ride with everything going on here with the Olympics, and the president and North Korea.”
For the last decade, Miller has worked to connect American officials with South Korean university and high school students through exchange programs, he said. His priority is to keep the U.S. a study abroad destination because it adds millions of dollars to the economy and creates alliances between the countries, Miller said.
More than 100 North Korean defectors are in the exchange program. They can take classes in the U.S., experience its culture and come back to share it with their North and South Korean contacts. This is an important way to combat propaganda against the Western world, Miller said.
“(Korean exchange students) get a great education and learn about values of countries while studying in America and it ties our countries together,” Miller said.
His inspiration for his education-based diplomatic job came from his parents, who were raised in and currently live in Jackson. His dad works for Jackson College and his mother for the Western School District. Miller was born in Charlevoix and attended preschool in Jackson. He moved to Japan in kindergarten, where he lived throughout high school.
Growing up with educator parents inspired his career in public diplomacy [JB emphasis], Miller said. It made him want to share educational opportunities with other people and advance interest in it, he said.
After establishing a home in a community, a person can become a sort of global citizen who feels most at home while traveling and meeting new people, he said. That’s all part of his job as a diplomat, he said.
However, there’s nothing better than to come home to his parents in Jackson, he said.
“I like the path I chose. I know where I came from and where I go home to, but have lived in so many other places,” Miller said. “It’s been a cool path.”
Original Article