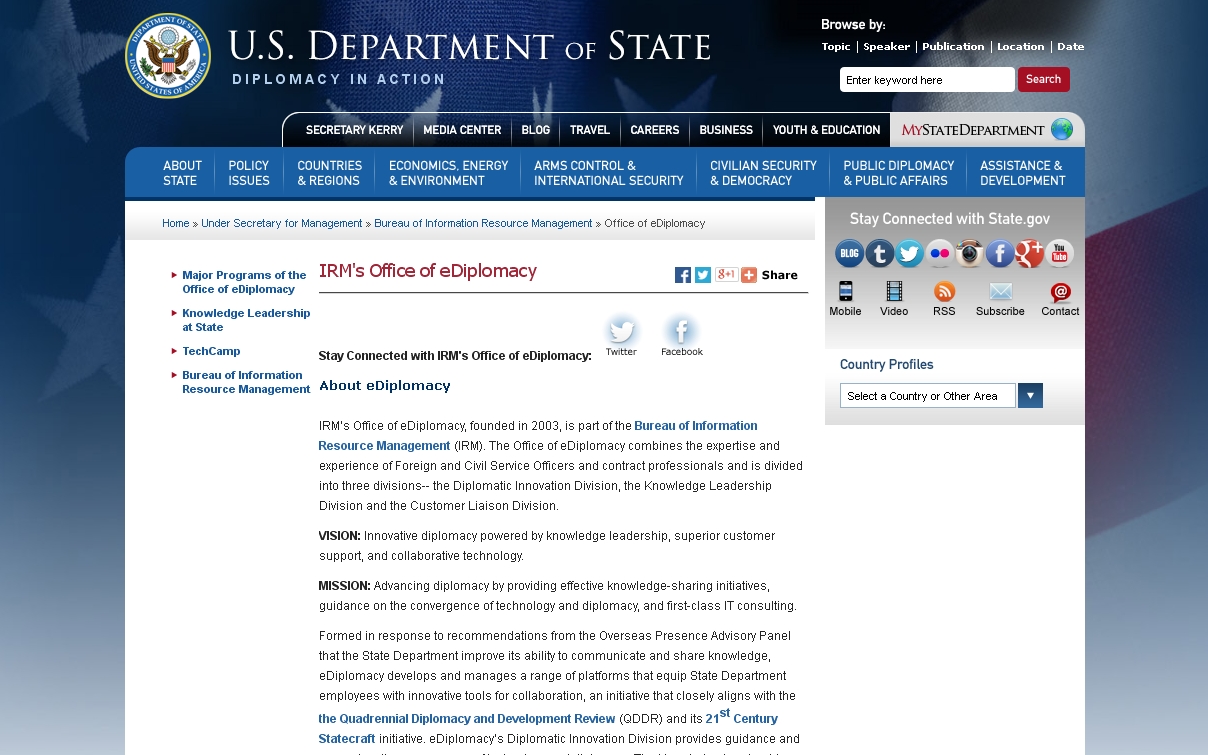 The Office of eDiplomacy acts as an applied technology think tank for the United States Department of State. The Office of eDiplomacy combines the expertise and experience of Foreign and Civil Service Officers and contract professionals and is divided into three branches, the Diplomatic Innovation Division, the Knowledge Leadership Division and the Customer Liaison Division.

Formed in response to recommendations from the Overseas Presence Advisory Panel that the State Department improve its ability to communicate and share knowledge, eDiplomacy hosts a variety of platforms that equip State Department employees with innovative tools for collaboration, an initiative that closely aligns with Secretary Clinton’s call for 21st Century Statecraft. Through the support and advocacy of new technology like blogs, wikis, professional networking and virtual student interns, eDiplomacy promotes an organizational culture for innovation that allows State diplomats to lead the foreign policy process at home and abroad.

Customer Liaison Division desk officers facilitate and enhance communications between the Bureau of Information Resource Management and its users and strive to ensure the highest level of customer satisfaction with IRM products and services. In addition, they collaborate with other U.S. Government agencies and foreign/multinational entities to provide information services that advance our national security, emergency preparedness, and communications objectives.

In 2002, Ambassador James Holmes started the eDiplomacy Task Force. In 2003, the task force was reorganized into the Office of eDiplomacy. Currently, eDiplomacy falls under the Deputy Chief Information Officer for Business, Management, and Planning.

Other previous eDiplomacy Directors at the U.S. Department of State include:

Major Programs of the Office of eDiplomacy

The Office of eDiplomacy runs several knowledge-management and new media technology programs for the State Department. Among the most prominent are:

In November 2013 Ukrainian MP Oleh Tsariov demanded a criminal investigation into the activities of TechCamp in Ukraine because he believed it was “preparations for inciting a civil war” because during training “instructors share their experience of Internet technologies, which are aimed at shaping public opinion and enhancing the protest potential and which were used to organize street protests in Libya, Egypt, Tunisia and Syria”.[3]

At the April 2012 FOSE IT exhibition, eDiplomacy demonstrated an innovative approach to presentations, using a Kinect sensor to move through a Prezi slide presentation.[4]