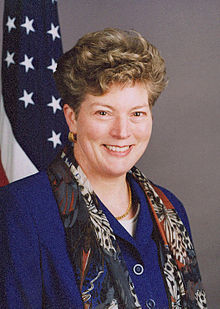 Ambassador Kathleen Stephens is the president and CEO of the Korea Economic Institute of America. Previously, she served as a career diplomat within the United States Foreign Service from 1978 to 2015. She was the U.S. charge d’affaires in India from 2014 to 2015 and the [JB — Acting] Under Secretary of State for Public Diplomacy and Public Affairs [JB emphasis] in 2012 [JB — from February 6 to April 4, 2012] . She served as the U.S. ambassador to the Republic of Korea from 2008 to 2011. Before moving to Seoul, Ambassador Stephens served in a number of policy positions in Washington, working as the Principal Deputy Assistant Secretary of State for East Asian and Pacific Affairs from 2005 to 2007, the Deputy Assistant Secretary of State for European and Eurasian Affairs from 2003 to 2005, the director of the Department of State Office of Ecology and Terrestrial Conservation from 2001 to 2003, the deputy chief of mission at the U.S. embassy in Lisbon, Portugal, from 1998 to 2001, and the Principal Officer at the U.S. consulate general in Belfast, Northern Ireland, from 1995-1998. She has also been posted to U.S. missions in Croatia, Serbia, South Korea, Trinidad and Tobago, and China. She holds a B.A. in East Asian Studies from Prescott College in Prescott, Arizona and an M.A. from Harvard University’s Kennedy School.