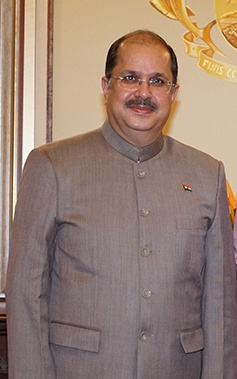 Sayeed image from Wikipedia
Dr Ausaf Sayeed emphasised that there will be no barrier between India's ambassador and its people in abroad.
Jeddah: The doors of the Indian embassy will always remain open to the NRI [JB – Non-Resident Indian] community which can approach the office with their concerns and constructive suggestions, Indian Ambassador to Saudi Arabia, Dr Ausaf Sayeed said.
He emphasised that there will be no barrier between India’s ambassador and its people in abroad.
Speaking at a rousing reception on Friday evening in Riyadh, he said “involving every people for whom we work is style of my work starting from beginning of service as Passport officer from Hyderabad to Ambassador in Riyadh.”
The new Ambassador recalled that he was dubbed as a ‘people’s diplomat’ and would uphold similar approach as Ambassador also.
Dr Ausaf Sayeed said that he can be easily accessible to the community as public diplomacy [JB emphasis] would be one of his top priorities. He urged NRIs to pay effective role along with embassy in addressing their compatriots’ issues especially those related to the destitute and downtrodden.
The new Ambassador also assured to extend all possible assistance to 30 lakh NRI community that lives in Saudi Arabia. He said that strong Indian community in the Kingdom is the most preferred community due to its expertise and sense of discipline.
Referring to the recent State visit of Crown Prince NRI community said that it will open a new chapter in bilateral relations of both countries, adding that Indo Saudi relations reaching new heights in last few years.
He said that since this will be his third time posting in Saudi Arabia and familiar with the Kingdom that would make easy in asserting NRI needs.
Deputy Chief of Mission, Dr Suhel Ajaz Khan spoke about the need of reaching community as well as Indian businessmen in the Kingdom.
Prominent community worker, Shihab Kottukad said that embassy was always addressing genuine grievances of the community, added that it will enhance further under leadership of new Ambassador.
Osmania University Alumni Association Riyadh (OUAAR) president Mohammed Mubeen commented that it was a moment of pride for Osmania University alumni that one of its alumni became Ambassador in a country where large number of diaspora lives.
The education facilities for children, access to auditorium hall for community events, grievances redressal are among few other issues highlighted by NRI community leaders.
A long queue of prominent NRIs waited for nearly two hours to present flowers, garlands and shawls to the new envoy. Dr Ausaf Sayeed touched by the rousing welcome accorded to him, which attracted an unprecedented number of community members.
Original Article