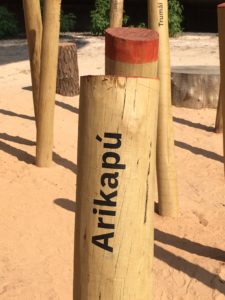 The Indigenous Peoples’ Memorial is one of the many striking buildings in the Brazilian capital designed by the prolific modernist architect Oscar Niemeyer. Built in a spiral-shaped design around a central courtyard it was apparently inspired by a Yanomami house. In truth, the building is looking a little the worse for wear. The permanent collection was closed when I visited while on holiday in August, but it was still a worthwhile visit, thanks to a display in that central courtyard, installed to commemorate the UN designation of 2019 as the International Year of Indigenous Languages.

Entitled “the Forest of Indigenous Languages”, from the sand-covered courtyard sprouted many wooden poles, each representing a different indigenous language. The poles were of varying heights, since to a standard-height base had been added an additional length, coloured red with annatto dye, according to the number of remaining native speakers of the language. Every centimetre coloured red represented a hundred speakers. This resulted in a few tall poles, with comfortably sized red bands: Yanomami; Tikuna; Karingang and Guarani Kaiowa. But these were rarities within the forest. Most of the red bands were alarmingly small; some barely more than a dusting of red on top of their pole. Like Arikapu; a language which had only six speakers recorded in 1998. And Latunde, spoken by a tribe decimated by an outbreak of measles in 1980.

According to the UN Permanent Forum on Indigenous Issues, which proposed the designation of 2019 as the International Year of Indigenous Languages, some 40 per cent of the 6,700 languages around the world are in danger: the overwhelming majority of these are indigenous languages.

It might be argued that a decline in the number of languages spoken worldwide is an inevitable consequence of a series of historical processes. Of nation-state building, with governments placing a premium on their ability to communicate to all of their citizens. Of colonialism, and the establishment of Empires. And of globalisation, with its emphasis on cross-border communication. Academic studies have found that the risks of language extinction are particularly correlated with high economic growth. But rather than simply accepting language loss as an inevitable outcome of an increasingly interconnected world, the International Year of Indigenous Languages is highlighting what is lost when a language dies.

Languages are a vital part of the culture of their peoples, and enrich the cultural diversity of our planet. A loss of the cultural identity provided by a community’s language impacts on the wellbeing of that community. Australian studies have shown for example that Aboriginal peoples who speak indigenous languages have higher levels of wellbeing than those who do not. But it is more than this. Languages embody a way of thinking about the world, and enshrine the values of their speakers. As languages are lost, then so too are unique perspectives on our planet, and on addressing its challenges. A lost language is a loss of the accumulated knowledge of its speakers.

In addressing the decline of languages, it is important to focus on the reasons for language loss. Fundamentally, languages are abandoned when speakers feel it is no longer beneficial to keep them up, because of discrimination against speakers, or simply because the language is not seen as leading to economic opportunities. In this sense, language loss is often part of a wider process of cultural subordination. If minority languages are to thrive, that subordination must be tackled.

The United Kingdom has recognised seven languages under the Council of Europe Charter for Regional or Minority Languages: Welsh, Scottish Gaelic, Irish, Scots, Ulster Scots, Cornish and Manx. The Charter only applies to languages traditionally used by the nationals of State parties, thus excluding the languages of recent immigrants, and only to those which significantly differ from the majority or official language, thus excluding dialects.

Discussion of the soft power of the United Kingdom in relation to language inevitably focuses on the global attractiveness of English; spoken as a first language by some 400 million people; a second language by a billion more; the dominant language of the internet and of international business. But the United Kingdom’s experience in supporting our regional and minority languages is also a part of our attractiveness, and offers many areas for international engagement in this International Year of Indigenous Languages.

Eluned Morgan, Welsh Government Minister for International Relations and the Welsh Language, in a statement in the National Assembly for Wales on 21 May this year, argued that the International Year represented an opportunity for Wales to demonstrate how it had implemented language planning, and to ensure that the Welsh language formed an integral part of efforts to enhance Wales’s relationship with the wider world. “Our living bilingualism” was an important selling point for Wales, which had a good story to tell around efforts to promote Welsh through immersion education, nursery education, language planning at a community level, and the status of the Welsh language.

Those of our languages with far fewer speakers than Welsh offer fine testimony that languages on the very brink of extinction can be saved, with the help of remarkable and determined champions.

Consider the case of Manx. The last native speaker of the language, a fisherman named Ned Maddrell, died in 1974, and UNESCO at one point classified Manx as “extinct.” But through the work of people like Brian Stowell, the language has revived. Stowell taught himself fluent Manx, helped by Maddrell and the other then remaining speakers, and even translated Alice’s Adventures in Wonderland into the language. Manx language teaching was supported in schools through a Manx Language Unit headed by Stowell. The Isle of Man government launched in 2017 a new five-year strategy to promote the Manx language both at home and internationally, which will culminate in a year of the language in 2021. UNESCO has now revised its classification of Manx, albeit to “critically endangered”.

The revival of the Cornish language has been just as dramatic. Cornish became extinct as a first language towards the end of the eighteenth century. A revival of the language proceeded through the twentieth century, again supported by the efforts of passionate and dedicated individuals, though was somewhat challenged by the use of a number of competing orthographical systems. There are now bilingual native speakers of Cornish, and UNESCO has again revised its former categorisation of the language as “extinct”. The Cornish Language Partnership, a public and voluntary sector alliance, promotes and develops the use of the Cornish language, and regulates the standard written form of Cornish, an attempt to reconcile the conflicting orthographies. In July this year Communities Minister Lord Bowne announced a new £200,000 fund to help support Cornwall’s language, heritage and culture, sitting alongside money from local partners.

Ifor Ap Glyn, the National Poet of Wales, has composed a poem, Lleisio (Voicing), to mark the International Year of Indigenous Languages. It is a call for languages to be used by being voiced. Preserving them in books can never be enough. It concludes:

“on children’s tongues, it will live on.”