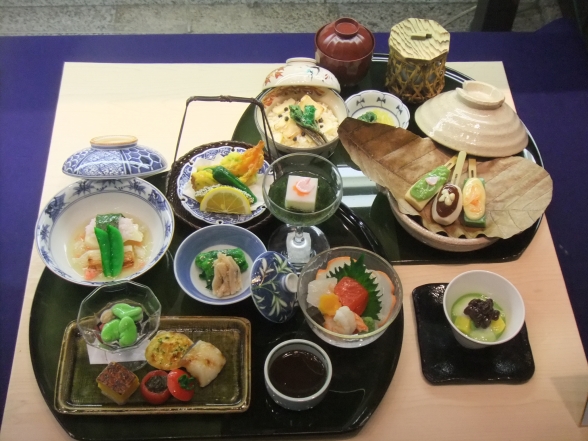 Sushi in Tashkent, ramen in Melbourne, tofu everywhere, and edamame coming soon to (or already at) a salad bar near you! Japanese food has been globally appealing for at least a generation.[1] So, why is Japanese cuisine (washoku) now the object of Japan’s gastrodiplomacy? What’s to promote, protect, or prove?

Anxiety over “authenticity,” Arjun Appadurai argues, becomes an issue as cultures (and cuisines) encounter globalization directly. “Doubt [about culinary authenticity] . . . is rarely part of the discourse of an undisturbed cuisine.”[2] If so, what are the “disturbed” (or disturbing) culinary trends addressed by Japanese gastrodiplomacy? One factor may be confusion (or simply fusion) in the global cafeteria: what really is Japanese cuisine? Equally important may be reinforcing, at home, significant conceptual distinctions between washoku as the culinary essence of the national diet and other “non-Japanese” foods (probably consumed on a daily basis as much or more than washoku).

Assertions of a distinctively “Japanese cuisine,” of course, speak to historical continuity and cultural heritage.[3] And Japan’s gastrodiplomacy takes shape through idioms of cultural heritage to promote, protect, and prove the essence of culinary authenticity, internationally and domestically.

In 1972, UNESCO adopted the Convention Concerning the Protection of the World Cultural and Natural Heritage.[5] Over the four decades since, UNESCO’s designations of cultural and natural heritage sites have become increasingly significant in many nations’ strivings for status and prestige (and tourist revenue).  As of December 2013, UNESCO has designated 981 World Heritage Sites across the globe (759 cultural sites; 193 natural; and 29 mixed; across 160 states).  Seventeen of these are Japanese, including the recently added Mt. Fuji (June 2013). [6]

In 2003, UNESCO adopted an additional agreement, the Convention for the Safeguarding of Intangible Cultural Heritage. [7] Japan played a very active role promoting this Convention, and perhaps not coincidentally, it was adopted during the term of the first Japanese Director-General of UNESCO Kōichirō Matsuura (in office 1999-2009; previously Japan’s Ambassador to France: 1994-99).

The first examples of Intangible Cultural Heritage were recognized in 2008, following UNESCO’s definition of “intangible cultural heritage” as “traditions or living expressions inherited from our ancestors and passed on to our descendants, such as oral traditions, performing arts, social practices, rituals, festive events, knowledge and practices concerning nature and the universe or the knowledge and skills to produce traditional crafts.”[8] As of December 2013, UNESCO has recognized 327 items of Intangible Cultural Heritage worldwide, of which 22 are Japanese.[9]

In 2010, UNESCO opened new vistas for national cultural aspiration when it recognized French cuisine as an Intangible Cultural Heritage (officially “Gastronomic meal of the French”), as well as “Traditional Mexican cuisine” and “Gingerbread craft from Northern Croatia.”[10]

Since 2010, a growing queue of countries including Japan has sought similar culinary honors. On December 5, 2013, UNESCO announced its recognition of Japanese cuisine as an Intangible Cultural Heritage.[11] The official designation is “Washoku, traditional dietary cultures of the Japanese, notably for the celebration of New Year.”

The Japanese application defines washoku in socio-cultural terms, as sets of practices and values that link foodways to social relationships, affirm connections to the environment and appreciation of nature and seasons, and express deep cultural affinities for rituals and patterns of communal life. Japan’s application says relatively little about ingredients, foodstuffs, flavors, dishes, culinary techniques, menus, terroir, regional styles and local specialties, or many other gastronomic attributes customarily associated with discussions of cuisine and food culture.

This is not accidental. UNESCO criteria are closely tied to the social and cultural ubiquity of food as lived experience within a particular social/cultural context. The designation of French food culture does not focus on haute cuisine (nor on great chefs with Michelin stars), but rather on the ways in which food preparation and consumption hold particularly important places in the daily fabric of French culture and social life; what is important is the integrative quality of cuisine. Japan’s proposal successfully emulated this approach (which some officials quietly admitted was an homage to the French).

Japan’s application was also framed implicitly by a negative lesson. A couple of years earlier, another Asian country was asked to withdraw and resubmit its application, which presented the cuisine of its former royal court. UNESCO critiqued this proposal as focused narrowly on elite and rarified aspects of cuisine, not on more populist and inclusive versions of culinary experience. Despite initial efforts by Kyoto chefs to focus Japan’s bid on the aristocratic cuisine of kaiseki ryōri, planners broadened the scope of Japan’s proposal, after the other country’s UNESCO application stalled.

What UNESCO recognition may mean (and for whom)

The UNESCO application clearly was embedded in broad agendas of cultural diplomacy and global projections of Japanese culture, as many of the government officials I interviewed made clear.[12] UNESCO recognition was anticipated to have both international and domestic impact.

Internationally, many officials saw the application explicitly in terms of Japan’s projection of “soft power,” as a key to maintaining Japan’s standing in the world.[13] More specifically, officials linked the UNESCO application to the concept of “Japan’s Gross National Cool.”[14] This keyword refers to the economic (and “soft power”) clout (and coolness) of Japan’s so-called “content industries” (whose products range from Pokémon and other manga and anime, to digital media, fashion, visual arts and design, and cuisine). The global successes of the “content industries” sharply contrast with the lagging fortunes of formerly mighty industries: automobiles, consumer electronics, and heavy industrial machinery.  The products of “content industries” are cool, and appeal to relatively upscale consumers around the globe (and “cool” drives tourism). Japanese cuisine itself has long since joined the product array of “cool Japan” as a global icon of urban sophisticated consumption.[15]

Officials also hope that UNESCO culinary recognition will neatly mesh with other dimensions of cultural projection that the government had been working toward for some time. In June 2013, UNESCO listed Mt. Fuji as a World Cultural Heritage site. In September 2013, Tokyo was awarded the 2020 Olympics. UNESCO’s washoku recognition completes a Triple Crown for Japan’s international self-presentation. Domestically, Mt. Fuji, the Olympics, and washoku will be promoted to bolster Japanese morale (battered by the long recession and the disasters of 2011) and provide reassurance that Japan is not falling behind internationally, even as it may feel eclipsed or threatened by its neighbors.

Both the Ministry of Agriculture, Forestry and Fisheries (MAFF) and the Japanese National Tourist Organization (JNTO) also anticipate that UNESCO recognition of washoku will convey an implication of safety, in the wake of the Fukushima nuclear disaster. Of course, UNESCO did not consider radiation issues, but the hope is that UNESCO recognition will imply (to both domestic and international audiences) that Japanese food products are safe, and that Japan is a great destination (especially for the 2020 Olympics), Fukushima notwithstanding.

UNESCO’s imprimatur obviously should bolster Japanese cuisine internationally, but also domestically. The Ministry of Foreign Affairs’ (MOFA) promotion of “Cool Japan” (which celebrates and promotes Japan’s centrality in global cultural consumption) has included cuisine among its cultural elements for at least the last 15 years. The MAFF and the JNTO also both promote Japan’s “cool cuisine,” MAFF to encourage Japanese agricultural and fisheries exports and to promote domestic production and consumption, and JNTO to promote domestic tourism, and to attract international tourists. (A 2008 JNTO survey reported foreign tourists selected “to eat Japanese cuisine” as their leading reason for coming to Japan [65.4%; among multiple choices]. In 2010, cuisine was second favorite, with 61.0%).[16]

And one aspect of the UNESCO bid had a distinctly domestic audience in mind. MAFF hopes to use UNESCO recognition to encourage Japanese to value their culinary heritage and to eat traditional foodstuffs (and thus sustain domestic food producers and processors). This is a matter not only of economic but also cultural concern that the ordinary diet in Japan increasingly consists of “non-traditional” (and often imported) foodstuffs. In this light, eating local and enjoying a traditional diet is an important goal of “shokuiku” (food education), incorporated into Japan’s elementary and secondary school curricula since the 1990s, which highlights food, body, nutrition, and communal consumption (family, school, community, etc.), and connections among agriculture/fisheries, environment, and society. The values embedded in the shokuiku curriculum are closely mirrored in the washoku proposal.

Japan’s UNESCO washoku campaign incorporates both external and internal goals, and illustrates some of the cultural and political dimensions that shape considerations of “cultural heritage.”[17] The protection and promotion of cultural heritage, as a bureaucratic process, transforms loosely coordinated cultural features—such as aesthetics, historical referents, daily life and practice, social ritual, and social hierarchy—into matters of government policy and official definition. Diverse cultural and social practices are moved from the realm of relatively unselfconscious daily life into bureaucratically defined categories of distinction and differentiation, projected on a global screen of cultural identities (nationally defined) and cultural politics for national recognition, as well as to promote domestic goals of cultural identity formation. As Aoki Tamotsu, an anthropologist and former Commissioner of Japan’s Agency for Cultural Affairs, has argued, elements of ordinary life become the basis for “national cultural brands.”[18] The brand consciousness may well be as much for domestic as for international consumption; gastrodiplomacy is inherently circular in its logic and in its effects.