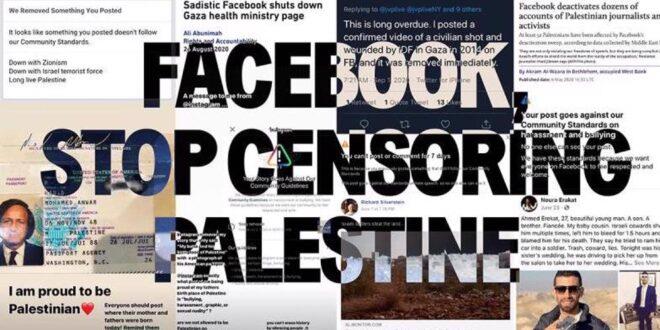 ‘Facebook’s Oversight Board was created to address Facebook’s content moderation issues – it is intended to act as an internal Supreme Court, making ‘final and binding decisions on whether specific content should be allowed or removed from Facebook and Instagram’,’ said the organizations, Wafa news agency reported on Saturday.

The NGOs included the Jewish Voice for Peace, Palestine Solidarity Campaign, the Arab Center for Social Media Advancement (7amleh), the Palestine Institute for Public Diplomacy, and the Boycott, Divestment, and Sanctions (BDS) movement.

‘But we challenge the appointment of Emi Palmor, a former general director of the Israeli ministry of justice’s Cyber Unit, to the Board. The unlawful work of the Cyber Unit under Palmor resulted in increased takedowns of thousands of pieces of Palestinian content and ‘imposed severe limitations on freedom of expression and opinion, especially about Palestine’,’ they said.

The NGOs called on the social media firm to “remove hate speech – not censor Palestinians, and advocates of Palestinian rights, for speaking out about Palestinian experiences under occupation and apartheid.”

“Members of the Oversight Board must be leaders experienced in upholding the rule of law and protecting human rights worldwide. Palmer’s resume should immediately disqualify her,’ said the organizations.

The NGOs further urged petitioners ‘to tell Facebook that they MUST focus on removing hate speech, not censoring valid speech by Palestinians and Palestine advocates – and that Emi Palmor has to go.’