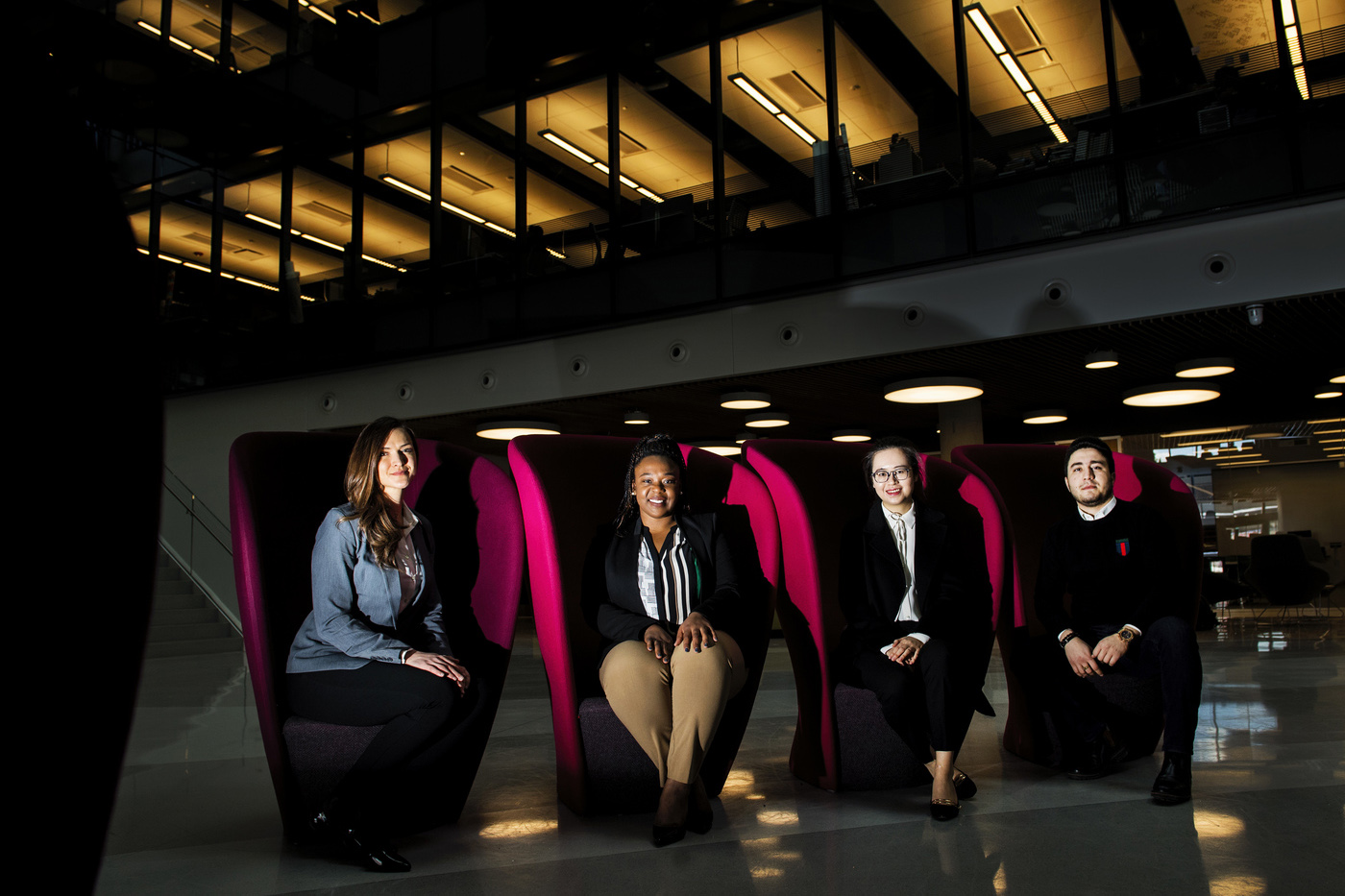 Photo: Aislinn Mangan, Barbara Alcena, Juan Ning, and Movlan Aliyev are volunteering at the United Nations Commission on the Status of Women this week. Photo by Adam Glanzman/Northeastern University
For four Northeastern students, volunteering at a United Nations commission is more than just a course assignment; it’s a chance to represent their countries on the world stage.
Barbara Alcena, Movlan Aliyev, Aislinn Mangan, and Juan Ning, graduate students in Tatjana Kobb’s public diplomacy [JB emphasis] class, are volunteering at the 63rd annual United Nations Commission on the Status of Women at U.N. headquarters in New York City through March 22.
The U.N. Commission, founded in 1946, is the principal global diplomatic body exclusively dedicated to the promotion of gender equality and the empowerment of women. Representatives from U.N. member states and certain nonprofit organizations gather each year to assess global issues that affect gender equality in order to come up with specific plans to address those issues, country by country.
In her class, Kobb offered students a chance to volunteer at the two-week-long summit if they made a compelling case for being there. The volunteers help facilitate discussions and take notes on what’s discussed, as well as attend forums for their own learning.
Alcena, who’s a social worker with the Massachusetts Department of Children and Families, says she consistently finds herself being an advocate “where things are unequal.”
“Women have always been at the bottom of the social hierarchy, and women of color even more so,” she says. “The U.S. has taken some good steps toward resolving that, but it’s still struggling. And if this big world power is still struggling, what about the rest of the world?”
Alcena sees the Commission as an opportunity to shed light on the multiplicity of challenges that women of color must overcome.
Like Alcena, Aliyev, Mangan, and Ning are motivated to tackle the big, thorny problems faced by women all over the world.
Despite being a U.N. member state, Aliyev’s home of Azerbaijan has few, if any, participants at the Commission on the Status of Women, he says. A former administrator in the foreign ministry, Aliyev hopes his presence will change that for the future.
“There’s a gap in Azerbaijan when it comes to what women envision for themselves and what society expects of them,” Aliyev says. “I see my role in that gap; if I do something now, maybe it can influence someone on some level.”
Ning says she experienced a similar dearth of opportunity growing up in China.
“Women’s empowerment is growing in China, but we’re still expected to get married and stay home,” she says. “Women have the consciousness to fight back against this, but they need some guidance.”
Ning, who previously worked as an English teacher in Malaysia, is volunteering at the Commission in hopes of learning how to provide that guidance, she says.
Mangan, a current registered nurse who has worked in the Middle East and a former wildland firefighter for the U.S. Forest Service, sees empowering women as a form of sustainable development, she says.
It’s only when people have their basic needs met—food, shelter, safety—that they can focus on something as abstract as empowerment, says Mangan.
“People need the opportunity to become the people they’re meant to be,” she says. “Without access to basic needs, this possibility is limited.”
For media inquiries, please contact media@northeastern.edu.
Original Article