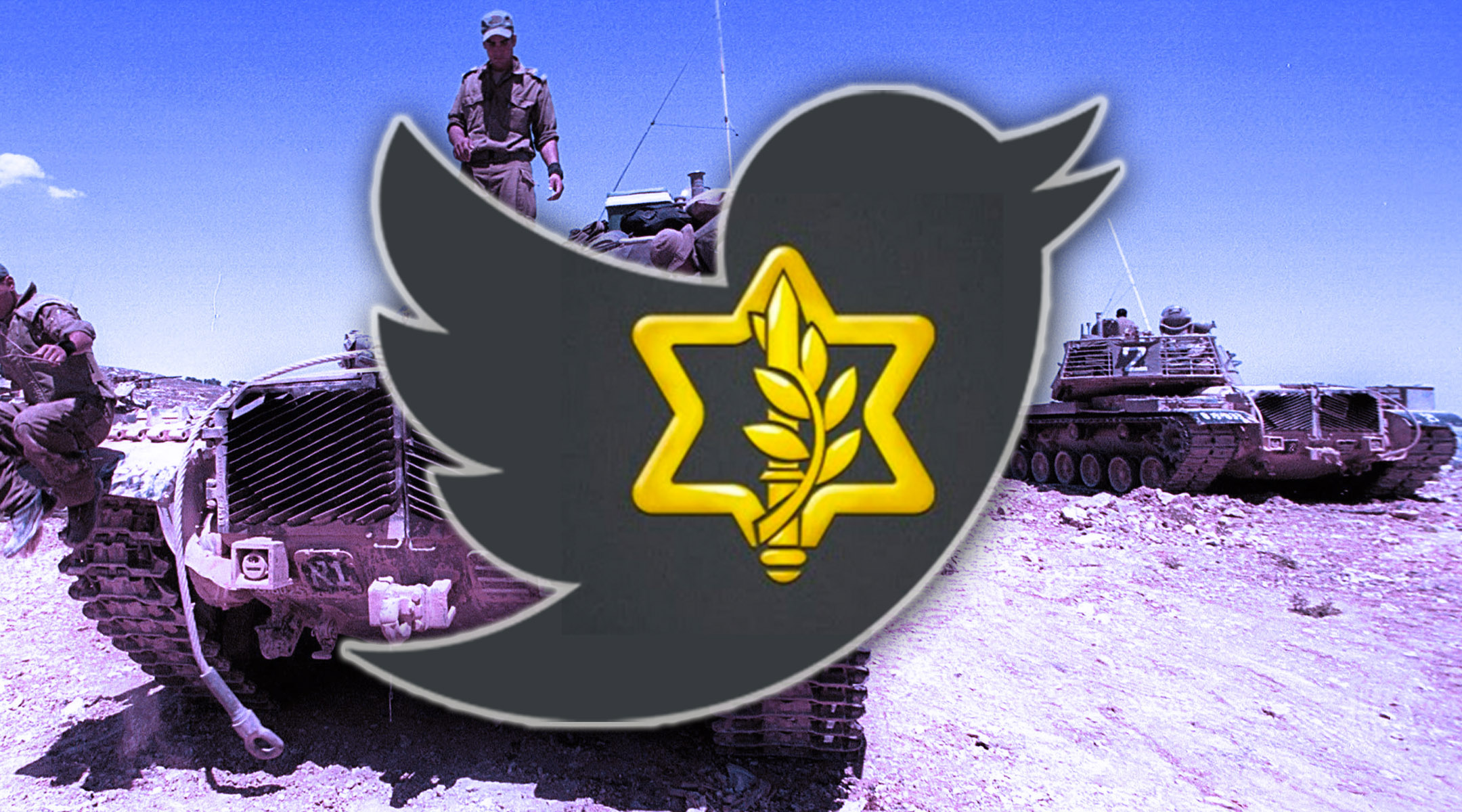 Image from article, with caption: (Photo by Quique Kierszenbaum/Getty Images; photo illustration by JTA staff)
JERUSALEM (JTA) — Earlier this month, just hours before the start of Passover, the British Labour Party tweeted out holiday greetings to its more than 671,000 followers.
“As Jewish people prepare for Passover, we’re wishing everyone in the Jewish community chag sameach,” read the now deleted message, which was accompanied by the image of a Star of David, a kiddush cup — and a loaf of bread.
The image of a food specifically prohibited on Passover, in a tweet from a party battling allegations of institutional anti-Semitism, immediately created a firestorm on social media.
Responses ranged from enraged to humorous. Joining the fray was the Israeli army, whose official account tweeted a “Happy Holidays” message with a similar image featuring matzah, an Easter egg and a Druze pilgrimmage site.
Responses on social media were mixed. Some users deemed the IDF’s foray into British politics to be “pure Jewish humor.” Others, such as Jerusalem Post contributing editor Lahav Harkov, criticized it as “just another case of the IDF being inappropriate on social media … which, while funny, is really not their place.”Others, like Times of Israel military correspondent Judah Ari Gross, suggested that the tweet had crossed a boundary.
“Just the Israeli military casually getting involved in another country’s internal politics,” he tweeted.In recent years the @IDF Twitter account has begun to adopt the vocabulary of social media, using language, memes and, notably, snark in a way that is uncommon for large government-run institutions, racking up 1 million followers in the process.
The IDF’s social media team is fully aware of its edgy, and occasionally controversial, branding. Earlier this year, the team leader, Maj. Keren Hajioff, appeared to revel in that reputation, posting a picture of herself and her soldiers dressed as trolls — a nickname for social media users who like to bait their enemies. View image on Twitter

37 people are talking about thisTwitter Ads info and privacy
This lighthearted and sometimes cutting approach is a radical departure from the army’s earliest forays into social media, said Aliza Landes, a former soldier in the IDF Spokesperson’s Unit who was responsible for dragging the military into the social media arena during 2008’s Operation Cast Lead. Initially meeting pushback from commanders skeptical of social media, Landes and her comrades weren’t even allowed to tweet without permission from the highest levels.
“The only thing I was allowed to tweet without getting permission from the IDF spokesman, a brigadier general, was what we were sending out on beepers,” she said. “If you look at our earlier tweets they are completely ridiculous. The army used to expect Twitter to adhere to army language rather than to try and engage in Twitter language. I’m very proud the little side project I started has become this big and is managed by some very excellent people.”
Asked about the IDF’s Labour tweet, Landes said that while she is “a huge believer, people should stay on topic in their area of expertise.” The IDF did manage to generate a lot of attention, she noted, and “if that’s the goal, then they are achieving their objectives.”
The IDF has certainly managed to garner attention. It recently celebrated its millionth follower with a tweet proclaiming “We got 99 problems but 1 million followers on @Twitter ain’t one,” a riff on a Jay-Z song with the lyrics “ninety nine problems but a bitch ain’t one.”

1,625 people are talking about thisTwitter Ads info and privacy
According to Gross, the army’s social media approach may have been outside its purview but stemmed from an effort to fill a vacuum left by the Foreign Ministry and Prime Minister’s Office.
“These various government offices are aware of the IDF’s provocative social media activities and evidently accept them,” the journalist said. ‘It’s not a case of negligence. Nor is it a case of someone accidentally or unwittingly overstepping their bounds. This is an active decision. The government knows what is going on, and the IDF is clearly not being told to stop.”
Humor and sarcasm seem to be the order of the day. One tweet, which was retweeted nearly 900 times, contained a video riffing off Facebook’s auto-generated Happy Birthday messages. In the IDF version, members of several terrorist groups wish Qasem Soleimani, the head of Iran’s Quds Force, many happy returns. At the end of the clip, the cake explodes.
In response, one reporter tweeted that he did “not know with what weapons World War III will be fought, but World War IV will be fought with memes.”
Another tweet, which garnered nearly 10,000 retweets and more than 31,000 likes, included a crude map of the Middle East that appeared to have been prepared in the rudimentary style of MS Paint. It showed an arrow pointing to Syria labeled “where Iran is” and another pointing to Iran labeled “where Iran belongs.”
View image on Twitter

12.3K people are talking about thisTwitter Ads info and privacy
As with many on social media, the IDF does not appear to believe in subtlety, with one message stating baldly “A #BlackHole isn’t the only thing that sucks light and spreads darkness … COUGH COUGH Iran’s Islamic Revolutionary Guard Corps.”
Iran and Hamas seem to be the IDF’s favorite opponents on social media, although the United Nations has also come under virtual fire.
And while some of the IDF’s choices have generated criticism, its combative tone online has also generated support, with journalists such as i24 news anchor Eylon Levy posting that “we can add the IDF Twitter account’s snark to the inventory of Israel’s lethal arsenal.”
Likewise, columnist Ben Caspit has called Major Hajioff the “IDF’s secret weapon against Hezbollah.”
According to British journalist David Patrikarakos, whose best-selling book “War in 140 Characters” chronicled the rise of the IDF’s social media team, “to contest the social media space, you need to be edgy.”
“The big problem institutions have is they are too risk averse,” he said. “You can contest the taste sometimes, but humor does work.”
Patrikarakos said sometimes you cross the line, “but on balance it’s better to be edgy and in tune with the medium in which you operate than not. That’s something that the IDF social media unit has got very right.”
Explaining why the IDF decided to employ a sometimes sarcastic voice on social media, spokesman Lt. Col. Jonathan Conricus said that his unit was “trying to adapt to the relevant media where we are operating and to use the tools at our disposal in the way best suited to achieve our goals.”
The IDF, he said, was “exploring boundaries.” While his soldiers “plan and assess and think what is appropriate,” it’s a “process of trial and error,” and “you won’t know what is OK, what’s acceptable and what’s frowned upon, until you do it.”
Conricus took issue with the characterization of his unit’s work as snark, telling JTA that flexibility on social media is key.
“I grew up as an infantryman,” he said. “You adapt your activity to the battlefield and the lay of the land.”
Asked if the IDF has any guidelines, such as avoiding political matters, the spokesman replied that “everything is case by case” and that given the rapid pace of social media, “opportunity favors those willing to take it and to a certain extent willing to take a risk.”
Conricus recalled a recent incident in which a Labour member of Parliament tweeted out a video purportedly showing Israeli troops beating a Palestinian. The video turned out to be from Guatemala.
“Perhaps in the past some people would’ve felt it’s not the place of the IDF to respond and demand an apology, but we see it as our duty to fight against different efforts to delegitimize the IDF, which [occur] in traditional media and online, mostly on Twitter,” he said.
At the end of the day, Conricus said, the goal is to strengthen Israel’s “soft power” by expanding its online presence. But the only way to do that is “by being active and engaging and broadening horizons, and sometimes that you do that through controversy,” he said, although the IDF is open to criticism if it gets something wrong.Former IDF spokesman Peter Lerner recalls an earlier era of social media.
“When I was in charge of social media, it was expected of organizations and bodies of size and influence to be regal to a certain extent, to show some level of statesmanship” and not engage in sarcasm, he told the Jewish Telegraphic Agency. “The reality today is somewhat more complicated than that, and the IDF is embracing that way of communicating in quite a good way.”
While Lerner said that he had not been a fan of the army’s subtle jab at Labour, he said that overall he believed his successors had done a good job at pushing boundaries.
The IDF’s new approach, however, has upset some people working in pro-Israel advocacy.
“I can understand why they want to be funny and amuse people, but they lose sight of the fact sometimes that it’s a professional organization that is responsible for using deadly force,” said one social media professional working on public diplomacy [JB emphasis] issues. He asked not to be named so as not to damage his relationship with the IDF.
“Joking about using lethal force,” this person said, “is something that can be seen as asinine and immature.”
Original Article