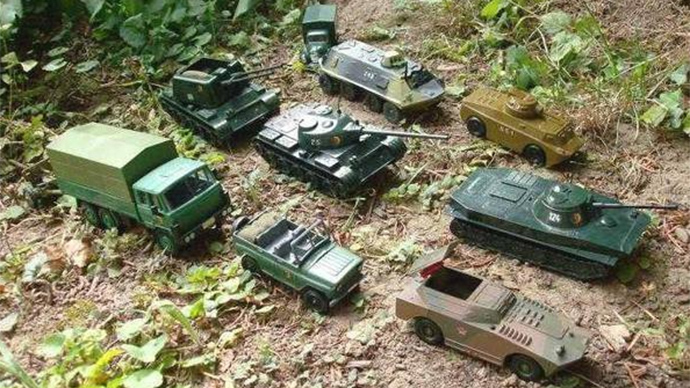 Last week, Russia’s president, Vladimir V. Putin, said he could take Kiev in two weeks. This week, he disavowed a cease-fire, then proposed a peace plan. Now a cease-fire is in effect. These zigzags did their job, leaving the West confused about his intentions, just as the European Union and NATO were meeting to figure out how to counter them.

In the information war, Ukrainians have been striking back. When Russian soldiers openly engaged Ukrainian forces at the end of August, a new hashtag began to trend on Twitter. Invented by a Belorussian and enthusiastically promoted by Ukrainians, #RussiaInvadedUkraine was used nearly a half a million times in the first few days. A week later, it was still being posted hundreds of times an hour.

In this conflict, technologically driven activism has become characteristic. Ukraine’s Maidan revolution began with a post on Facebook, and a “nerd unit,” staffed by volunteers who are crowdsourcing the funding for their drones, is operating in the contested east. What’s new and important about #RussiaInvadedUkraine is its clear language.

One of the features of Russia’s war against Ukraine has been the reintroduction of Newspeak into public discourse. The Kremlin has used misinformation, propaganda and outright deceit to frame the debate. Ukraine’s cyberactivists insisted on #RussiaInvadedUkraine to remind Western leaders and journalists who are loath to use such plain terms that our weak words are an unnecessary concession to Mr. Putin.

It may seem precious, when the war has already claimed at least 3,000 lives, to fuss over the proper use of language. It isn’t. George Orwell, in his famous 1946 essay, “Politics and the English Language,” argued that the battle against poor English wasn’t frivolous because “the slovenliness of our language makes it easier for us to have foolish thoughts.”

There is a case for fudging. By calling Russia’s latest aggression against Ukraine an “incursion,” as President Obama did when Russian tanks first drove in, we could be leaving Mr. Putin an easier way out. If he never “invaded,” the logic goes, he won’t need to face the humiliation of retreat.

That might have been a reasonable theory this summer, after the destruction of Malaysia Airlines Flight 17. Russia had already invaded and annexed part of Ukraine — Crimea — and Russian citizens and Russian weapons were spearheading the insurgency in the Donbass region in the east. But it was just possible that Mr. Putin would choose to end a conflict that had already cost Russia billions of dollars.

He didn’t. Instead, as the Ukrainian military was making gains in the Donbass, Mr. Putin opted for further escalation by directly sending in Russian troops and equipment.

Mr. Putin has already muzzled Russia’s once boisterous free press, exiled and imprisoned opposition leaders and assumed direct control of the mass media. If he opts for a compromise over Ukraine — and the best scenario on offer right now seems to be an ugly and destabilizing “frozen conflict” in the Donbass — he won’t need the West to help him justify himself at home. He has a powerful domestic propaganda machine to do that.

By adopting Mr. Putin’s Newspeak we aren’t offering him a useful diplomatic fig leaf. We are convincing him of his strength and our weakness. When Russian troops fighting in Ukraine are described on Russian state television as being “on vacation,” the Kremlin is asserting not only that it can send soldiers to Ukraine, but that it can explain their presence with an aggressively transparent excuse that amounts to thuggish mockery. 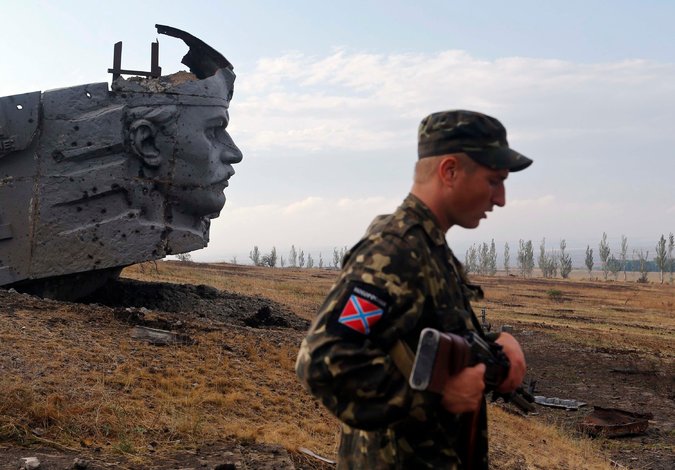 A
pro-Russian separatist standing near a damaged war memorial on a hill east of Donetsk. Credit Maxim Shemetov/Reuters

Mr.Putin is challenging us with a double bluff, one military and one rhetorical. Reasonable people can differ on how much we should be supporting Ukraine and on how strongly we should be sanctioning Russia. But it is no longer possible to disagree about what is happening.

This is not a civil war, nor is it a fascist coup. Eastern Ukrainians are not rising up against an oppressive regime in Kiev.

We don’t know whether this week’s talk of cease-fire is real or just a feint, nor do we know if Ukraine will survive as a viable, independent country. But one thing is already certain: Russia has invaded a sovereign, democratic state, and through that use of force aims to shape its actions.

We may decide we lack the will to stop this or to more forcefully help Ukrainians to stop it, but in making that decision we need to be clear about what is going on. The distinction between lies and truth matters here because this conflict started with the Ukrainian people’s revolt against authoritarianism and in favor of the liberal rights and responsibilities Ukrainians call European values. This is partly a fight of freedom of speech against censorship. In the Ukrainian-Russian conflict, moral clarity is essential, but to get there we need linguistic clarity, too: Ukrainians decided to build a democracy at home and to make a trade deal with Europe; Russia invaded.

I generally agree with the sentiments of this article. Russian actions are illegal and provocative. But it is also grossly oversimplifying what is going on. One part of this war clearly is a civil war. It may only be one component, but it is fundamental to what is going on. The Russians in Eastern Ukraine who are opposing Kyiv did not drop in from Moscow; they really do represent real people living in that part of the country. Similarly, there is no doubt that Western states helped to provoke this conflict by backing the Russians into a corner. They were warned for many years of Russia’s fear of NATO’s expansion, but they chose to ignore this while seized by an evangelical zeal to spread liberal values. These are realities and complications that cannot be overlooked.

Another consideration to bear in mind is this: Vladmir Putin is taking a page out of George W. Bush’s book. The precedent of invading and occupying foreign countries for trumped-up security reasons was started in Washington and backed/supported by some of the same states that are condemning Russia now. Some states can justifiably claim to be consistent in their condemnation – France, for example. But the US and many of its allies got this ball rolling. I’m pretty sure that Vladmir Putin looks at the invasion of Iraq or the breakup of Kosovo and regards his Western enemies as simply self-delusional hypocrites who have led the way on the path he is now following. He would not be entirely wrong.

As the Lithuanian president, Dalia Grybauskaite, put it earlier this week (on Twitter, of course), “#Ukraine is attacked because of its European choice. It is not only defending its territory, but also #Europe and its values.”

If the fighting in the Donbass was in fact a civil war, it would matter to Ukrainians, Russians, Eastern Europeans and everyone who cares about the thousands who have died. But the wider security implications would be limited. Countries do break up — the Soviet Union, Yugoslavia, Czechoslovakia, perhaps even the United Kingdom.

What makes the Ukrainian conflict consequential is that it is not a civil war. It is an annexation of territory, the invasion of one European country by another. As Carl Bildt, the Swedish foreign minister, argued in a speech in Berlin in June, Europe’s entire security structure is built on the agreement that this would never happen again.

“The principle of respecting existing borders was laid down as one of the key foundations of peace in our Europe,” Mr. Bildt said. “And it has been adhered to up until March of this year.”

In other words, Russia has broken Europe’s geopolitical rules, and thereby changed them.

Confronting Mr. Putin is a painful prospect, but so is living in a world governed by these new rules. Mr. Putin and his propagandists understand this very well, which is why they like to present us with the easier option of obfuscation. That’s the most dangerous choice of all. #RussiaInvadedUkraine. Please retweet.

Update: This article has been updated to reflect news developments.

Chrystia Freeland is the author of “Sale of the Century: Russia’s Wild Ride From Communism to Capitalism” and a Liberal member of the Canadian Parliament.