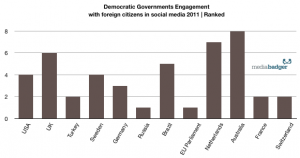 The concept of Digital Diplomacy (sometimes called Virtual Diplomacy) is fairly new, arguably coming to the forefront of international affairs as a result of the failed Green Revolution in Iran in 2009 where social media played a role, albeit ambiguously in its effect. Then came the Arab Spring and the use of Facebook and other tools. Today, the most active governments are the U.S. and UK in using social media as Digital Diplomacy tools. Below we’ve provided a ranking of which democratic and non-democratic countries are most active in terms of international relations through digital media in Cyberspace.

Democratic Governments Using Social Media for Digital Diplomacy
As the graph below shows, the U.S. government leads the way with a foreign affairs department using social media actively to promote its foreign policy with a close second from the UK FCO. Australia is third but coming up fast. For the most part however, most governments tend to “broadcast” and not engage in dialogue. This graph “ranks” a government based on a) volume of content created and pushed across digital channels, b) number of channels they are active in and c) number of “entities” or people that push out content from that department. The highest a government can achieve for activity is a 9.

Democratic Governments Engaging in Dialogue with Foreign Citizens for Digital Diplomacy
Without a doubt, Australia leads in terms of responding to inquiries and having, albeit short, bursts of engagement with citizens from other countries. Behind them is the Netherlands and then the UK. We term “engagement” as responding to inquiries and questions and occasionally in Twitter, re-tweeting content from someone else. Engaging in dialogue however, can be a challenge for a government in international affairs as there can be serious implications. Over time, as diplomatic services become more familiar with and comfortable in the use of social media, engagement levels will likely change.

Methodology
For this research we used our proprietary software to analyze the Twitter accounts of confirmed government foreign affairs departments and then looked at traffic and engagement across blogs, Facebook and any other social networks such as YouTube. Rankings are designed to understand the level of activity use by each government in a channel. Human analysts then completed the work through link and data verification.