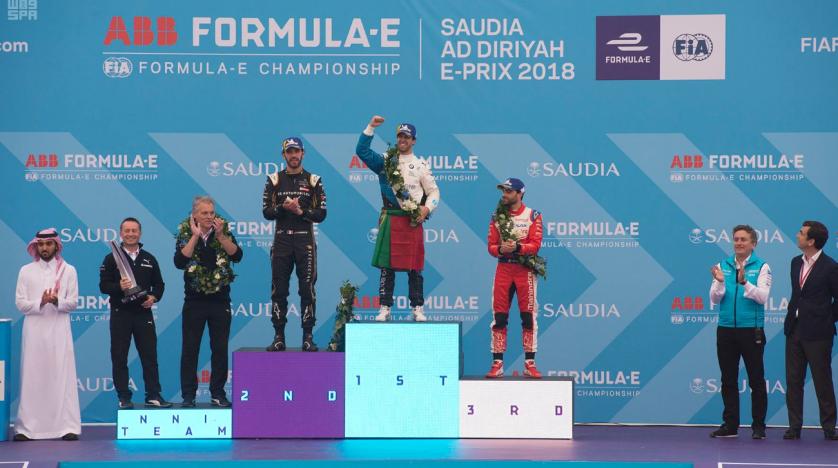 Image from article, with caption: Portugal’s Antonio Felix da Costa won the opening race of the Formula E season in Saudi Arabia. (SPA)
With the recent transformations in the international political scene, traditional ways of achieving foreign policy aims have also transformed. Earlier approaches such as foreign aid and diplomacy were the most common ways of achieving foreign policy goals. Now, “national integrity” is respected by all states in the international order and public diplomacy is the most common way to achieve goals.
Public diplomacy [JB emphasis] has become a significant instrument of foreign policy and is used by states to influence public opinion and the ruling class. In essence, public diplomacy is the promotion of ideas and national interests by informing and educating people around the world through cultural activities, exchange programs and social media.
Saudi Arabia’s priorities are increasingly focused on enhancing its public image by becoming more transparent in the international arena. In this respect, the Kingdom broadly uses several tools of public diplomacy in its foreign policy to promote and shape international public opinion. In this regard, non-profit foundation MISK is devoted to cultivating and teaching leadership skills in Saudi Arabia’s youth.
The foundation uses cultural exchange programs to create ties with other cultures around the world. Moreover, the primary goal of this program focuses on the country’s youth and provides different means of fostering talent, creative potential and innovation in a healthy environment that paves the way toward opportunities in the arts and sciences. In so doing, Saudi Arabia projects a better image of its modernization to the world.
The role of women is also at the forefront of Saudi Arabia’s public diplomacy efforts, as evidenced by the Kingdom lifting the ban on women driving, and increasing women’s participation in the finance, trade, technology and sports sectors. Undoubtedly, increasing women’s participation in the workplace is a boon to the national economy. With this modest progress on women’s rights, Saudi Arabia has recently sought to turn this issue into an active soft power tool to influence foreign public opinion.
“With Saudi Arabia’s recent modernization efforts, the Kingdom’s public diplomacy practices have increased to a level that should be appreciated.
Dr. Khaled Manzlawiy”
Saudi Arabia is also utilizing the most popular social media platforms as public diplomacy tools. The respective amounts of Saudis using these platforms are: YouTube 71 percent, Facebook 66 percent, Instagram 54 percent, Twitter 52 percent, and Google Plus 32 percent.
Cultural diplomacy is also used by the state to influence other countries. The main aim of Saudi Arabian cultural diplomacy toward the Muslim world is to ensure and promote the Saudi position as the leader of Muslim states and solidify its cultural influence that naturally inheres in a Kingdom that is the capital of both the Muslim and Arab worlds. This power explains why Saudi Arabia has stood firm in the face of the shock waves that have hit the Middle East. This soft power articulates much of the leverage that Saudi Arabia boasts in this region and around the world.
Saudi Arabia is also employing cultural diplomacy in the US, with 55,000 Saudi students studying in American colleges and universities, along with robust cultural and educational ties through scores of exchange visitors each year.
With Saudi Arabia’s recent modernization efforts, the Kingdom’s public diplomacy practices have increased to a level that should be appreciated. It has gauged the openness of Saudi society to concerts and various forms of entertainment and is actively molding a new image for the country through public diplomacy.
The sports industry is also rapidly growing in Saudi Arabia and becoming a strategic pillar of the Kingdom’s global PR. In December, the nation hosted a three-day Formula E event that included motorsport, live music by international artists, entertainment, and cultural activities. Saudi Arabia’s transition from a traditional community to a modern society is being recognized by the international community as a crucial step toward economic and social reform.
The Kingdom needs new means to make its foreign policy more effective. Public diplomacy is a powerful tool that can play a big role in crafting public opinion around the world and breaking common stereotypes about Saudi Arabia and its norms. It is evident that focusing more on public diplomacy is an effective way to portray Saudi Arabia’s modernization to the world.
Dr. Khaled Manzlawiy is Deputy Permanent Representative of the Permanent Mission of the Kingdom of Saudi Arabia to the United Nations in New York. Twitter: @khaledManzlawiy
Original Article