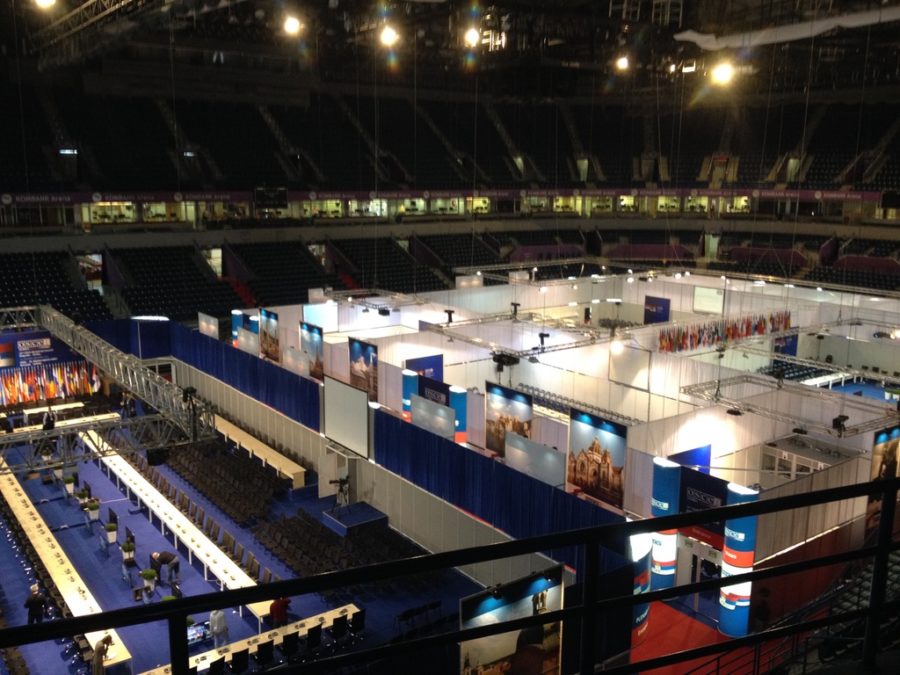 Inside the Belgrade Arena, setting for the OSCE ministerial meeting in late 2014

This week stories about negotiations have been prominent in the media both in the UK and in Serbia.

The history of diplomacy might also be called the history of negotiation. Negotiating is a way of life for diplomats. Whether you are working on a major arms control treaty, opening a new diplomatic mission or drafting a statement to be delivered on behalf of several countries, you are likely to be using your negotiating skills.

Every diplomat will begin a negotiation aiming to get everything that they want. But it would be a very rare negotiation indeed if everyone were to succeed in that aim. To quote Mick Jagger: you can’t always get what you want.

So it is also important to know what you need. In other words, and although you may not always make this public, you need a clear idea of the minimum you can accept, known in diplomatic jargon as your ‘red lines’. It is also good to know where you would like to end up – and how important different issues or even particular words are to you.

Different countries may have different negotiating styles or use slightly different tactics. My first exposure to negotiation as a new diplomat was a role playing exercise on a training course. I played the part of a country that only ever said no. It was quite fun for an afternoon – but hardly constructive! Over more than thirty years in diplomacy has taught me that, luckily, negotiating positions are rarely so inflexible.

Even in this online world of instant news, negotiating is one area of diplomacy that still goes on behind closed doors. There is a good reason for this.

The point of negotiating is generally to find a middle point that all sides can find acceptable. That needs flexibility on all sides. It probably means all sides making some concessions, either dropping a demand of their own or accepting someone else’s request or choice of words. Imagine how difficult it would be to show flexibility if you were standing in the street shouting out your negotiating position. The same applies for the modern social media equivalent.

My recipe for successful negotiations would also include:

In an ideal world, and on a human level, the ingredients would also include sleep, rest, food and drink. You might though think twice before accepting too much hospitality from another party at a critical point in negotiations! Effective negotiating takes good concentration and sharp wits as well as patience and stamina. It is all too easy for overtired negotiators to get confused or even start unravelling things that they have previously agreed.

I think the first thing I ever negotiated ‘for real’ was a declaration of the de facto reestablishment of diplomatic relations between the UK and Lithuania in 1991. The document was a friendly and spontaneous initiative whilst our respective ministers sat in talks in the room next door. In those pre-internet and pre-mobile phone days, I couldn’t consult colleagues in London or our international legal experts in London as we would now. I’m sure both countries have the document tucked away safely in their archives – I only hope it didn’t contravene any norms of diplomatic practice.

Subsequent experiences of more complex negotiations, in Geneva and Vienna, the sort of international meetings that involve multiple actors and interests taught me how important personalities and personal relationships can also be.

As a negotiating diplomat you begin to understand that it is essential to build trust, and that human relationships really can help solve the most intractable political problems. Some of the most fascinating diplomatic stories are about unlikely, behind the scenes, human contact even in the most sensitive and historic negotiations.

I had never really seen much of a link between the board game ‘Diplomacy’ and real life diplomacy until I became a multilateral diplomat at the Organization for Security and Cooperation in Europe, involved in negotiating international declarations and decisions. In real multilateral negotiations, like in diplomatic board games, you certainly need the agility to respond to demands or changes of position that may pop up unexpectedly for example if one of the parties receives changed instructions from a newly elected Government. You also find yourselves running around talking to many different delegations.

(Incidentally one of the most unusual and memorable negotiating venues I have experienced was among the spectator stands inside the Belgrade Arena, setting for a ministerial meeting in late 2014.)

The best advice I received before becoming a multilateral ambassador at the OSCE was about the need for ‘strategic patience’.

You need to be patient and have a longer term perspective – keeping your ultimate objective always in sight. That objective may be focused on a national interest but often is something aimed at making the world a little bit safer or better, whether that is by banning dangerous weapons, resolving a regional conflict, increasing international cooperation or in some way improving everyday lives.

Achieving an international agreement is extremely rewarding for everyone concerned. The results may not always appear in the global headlines – but I know that leading successful talks between 57 states on improving the safety of journalists, the culmination of weeks and months of hard work by many people, was one of the most rewarding experiences of my career.

Around our diplomatic network, including our Belgrade Embassy, we get involved in or follow a range of negotiations. For example, UK/EU negotiations on the exact terms of our future relationship; bilateral talks; multilateral talks on global issues and, of course, the EU-led Belgrade-Priština Dialogue, to which the UK remains every bit as committed as ever.

Some negotiations can last for years because their subject is so complex and difficult – major international trade talks for example. Others can be quite short and simple – I hope that with a new Serbian Government due to be in place very soon we can quickly conclude negotiations on our future trade partnership.

Some talks are a diplomatic response to a changing global reality. The web of engagement and activity ahead of next year’s COP 26 UN climate conference in Glasgow on slowing and reversing global warming and creating a greener future, very literally aims to make the world a better place.

In my own country it took years of patient and determined efforts to end decades of violence in Northern Ireland. The Nobel Peace Prize was awarded first to peacemakers in Northern Ireland in 1976 and again in 1998 – the year the Good Friday or Belfast Agreement was finally signed.

The EU-led Belgrade-Priština Dialogue has also proved a long process, having started nearly ten years ago. The past few months have seen a very welcome resumption and, despite the complications of the coronavirus pandemic, a recent flurry of political and expert contacts. Like many negotiations this has interrelated technical and political aspects. Talks between officials and experts can build the confidence needed for political agreement – whilst political commitment can make it easier to find answers to practical and technical questions, including compromises where needed.

External facilitators and the wider international community can help too – as they did in Northern Ireland. Ultimately though it is the political will and commitment of the parties to a sustainable solution that will bring about normalisation of relations, benefits for everyday lives – and give governments more time to focus on other challenges.

In all these negotiations I have talked about, diplomats will be there every step of the way, supporting and advising political decision makers, and building the relationships needed to underpin talks and help reach agreements.

One of my colleagues pointed out to me today a tweet by distinguished former French Ambassador Gérard Araud, which said ‘the best diplomat is the one that gets a satisfactory result in a negotiation while allowing the other side to claim victory’. I might have put it more prosaically. For me the ideal outcome of a negotiation is a good, sound result that allows all sides to know they have achieved something worthwhile.

In any international negotiation diplomats will be using their professional skills and expertise to show that, though you can’t always get everything that you want, as Sir Mick put it: if you try sometime, you just might find you get what you need.