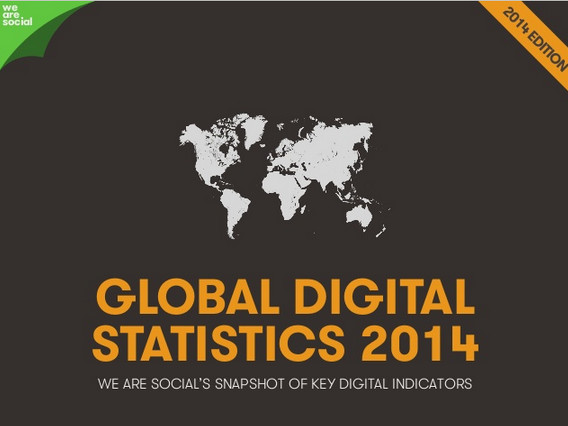 On Wednesday, We Are Social Singapore released its 2014 Social, Digital & Mobile Around The World report, which offers key statistics, data and behavioural indicators for social, digital and mobile channels around the world.

There are currently 2.4+ billion Internet users (35% of the world’s population), among whom 1.8+ billion are active. The most connected regions include North America, Western Europe, Oceania, and Central and Eastern Europe, with Internet penetrations rates of 81%, 78%, 63%, and 54% respectively.

When it comes to social networks, the top sites gained more than 135 million new members last year. North America remains the most socially connected at 56%, while Western Europe, Oceania, South America, and Central America are “trailing” about 10 points behind.

“It also appears that social media is now an engrained part of the lives of people across different demographic groups,” says Simon Kemp on the We Are Social Singapore Blog. “This increased ubiquity may result in some changes to the specific demographic bases of individual platforms, but even if people’s habits are changing, it appears that people are moving from one social platform to another, rather than deserting social media in its entirety.”

At 6.5 billion, mobile subscriptions are also at an all-time high. Some regions even sport penetration levels exceeding 100%:

This report presents all the key statistics, data and behavioural indicators for social, digital and mobile channels around the world. Alongside regional pictures that capture the stats for every nation on Earth, we also present in-depth analyses for 24 of the world’s largest economies: Argentina, Australia, Brazile, Canada, China, France, Germany, India, Indonesia, Italy, Japan, Mexico, Nigeria, Poland, Russia, Saudi Arabia, Singapore, South Africa, South Korea, Turkey, Thailand, the UAE, the UK, and the USA. For other reports in this series, please visit http://wearesocial.sg/tag/sdmw

You will find all the facts and figures from the report in the slides below.