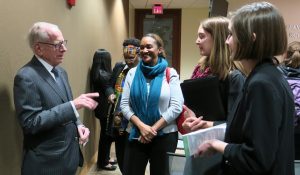 Dr. Allan Goodman chats with attendees at “Making the Hard Case for Soft Power” at American University. Photo credit: Brittany Lynk.Exchange of persons programs “are a lot like dark matter.”That was Dr. Allan Goodman’s assertion at the “Hard Case for Soft Power” panel discussion at American University. They’re hard to see, but critical to U.S. “soft power.”Goodman and four other speakers filled a large conference room at the SIS on Monday, February 25 to discuss “Making the Hard Case for Soft Power.” Lynne Weil’s blog post offers an excellent summary, plus her valuable tips on working Congress.The “dark matter” analogy is so good that I’m going to steal it. I think the real dark matter is overseas, where Foreign Service Officers and locally-engaged staff advocate for U.S. interests every day.U.S. mission staff are the secret sauce that brings exchanges and public affairs together where the foreign audiences live. Few can see public diplomacy’s overseas operations because they are dispersed among some 189 locations. Universal representation, with a focus on local audiences in every country or international organization, is the factor that sets apart the United States from its national competitors.The panelists pointed out that the Congress has insisted on appropriating funds at the full level — in defiance of the Administration’s budget requests, which at first zeroed out exchanges. However, insiders tell me that the funding for State Department public diplomacy operations is not as secure. That comes from a different appropriation than exchanges.The Senate is now examining a State Department proposal to merge two of the large public-diplomacy support bureaus — International Information Programs (IIP) and Public Affairs (PA). The details have not been revealed publicly. A merger could streamline the bureaucracy. Or it could end up stressing publicity over supporting the varied advocacy programs of our missions abroad, which depend on IIP for programs and messaging.U.S. public diplomacy should be where possible a bipartisan enterprise, so the panel was wise to stay away from politics. However, the debate skirted an issue that affects academic exchanges. How is our national debate about “illegal immigration” affecting foreign study in the U.S., which brings $35 billion dollars per year to the U.S. economy?Students still come from overseas to study at U.S. universities, but new students are on the decline. That may be due to several factors, but as one panel participant put it, “the Government sets the environment.” To improve this problem, the President’s recent words supporting legal immigration and its contribution to our welfare are a helpful first step. Those words need a lot of follow-up.Both Lynne Weil and Blake Souter gave valuable advice on how to advocate for strong public diplomacy. Let’s hope that those in the room will make good use of it on Capitol Hill and elsewhere..

JBJohnsonJoe B. Johnson consults on government communication and technology
after a career in the United States Foreign Service. He is an instructor
for the National Foreign Affairs Training Center, where he teaches
strategic planning for public diplomacy. Read MoreOriginal Article