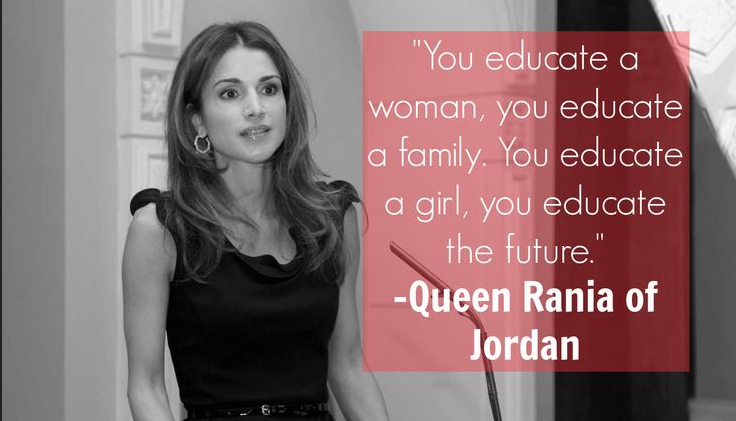 Over the past 16 years, Queen Rania of Jordan has become a champion of women’s rights, a vocal proponent of education in the Arab world and a strong voice for peace in the Middle East.

And while some associate royalty with stuffy traditions and secrecy, Queen Rania isn’t afraid to Instagram a pic of herself eating a burger to kick off the weekend.

With nearly 4 million Facebook followers, 3.6 million Twitter followers and more than 470,000 Instagram followers, Her Majesty has definitely embraced the 21st century. But she uses these platforms to let her guard down, and invite people to see who she is — not just a queen, but also a mother, wife and activist.

“Sometimes it can be hard to connect with people when you’re a ‘queen,'” she tells Mashable. “To some extent,

I think social media has opened a window into my life

I think social media has opened a window into my life and helped demystify who I am and what I do.”But it also has a dark side — ISIS extremists have used social media to promote their own radical beliefs and barbarism, casting a negative light on the Arab world and Islam. A study released Thursday by the Brookings Institution and Google Ideas showed that ISIS is incredibly successful at spreading its message through social media, especially on Twitter.

And in February, ISIS executed a Jordanian pilot, Lt. Muath al-Kaseasbeh, in a horrific video.

“It affirmed what we already knew, that this is a group with no conscience, no dignity, no nationality, no religion and no boundaries,” Queen Rania says.

We spoke to her about how technology and social media can help people establish their own stories, fight back against ISIS and — ultimately — create a better world.

Mashable: You started your speech at November’s Abu Dhabi Media Summit by saying that everyone has a shared “desire to author and tell our own story.” How do you feel technology and social media help us do that every day?

Her Majesty Queen Rania Al Abdullah: Stories and our desire to share them are universal. Technology simply offers new creative ways to tell them, and have them reach more people … Social media can also make us better listeners, more empathetic, more accepting and more aware of the millions of tales around us, big and small.

You’re very active across various social platforms. Who do you hope to reach through social media?

I hope to reach people who care about change, people who are not afraid to step out of the comfort of the familiar

I hope to reach people who care about change, people who are not afraid to step out of the comfort of the familiar, who want to see and strengthen the universal threads and common experiences that connect us — irrespective of age or geography.We all have goals, dreams and aspirations. We have our ups and downs, and at the end of the day we are all human. I hope that people can see this simple message, and work toward a more positive tomorrow for everyone.

Sometimes, it can be hard to connect with people when you’re a “queen.” To some extent, I think social media has opened a window into my life and helped demystify who I am and what I do. Obviously, it also helps spread ideas and shed light on the causes I’m passionate about.

The fight we have on our hands in the Middle East is as much over narrative as it is over territory. And unfortunately, ISIS has successfully managed to use modern media tools in this fight to propagate their radical beliefs. And it reflects negatively on all of us in the region.

Today, too many people have a single story of the Arab world. Like it or not, we are being defined by a narrow narrative — their narrative — which is dominated by extremism, hatred, conflict, crisis and chaos … We must take back the power to define who we are. Moderates must use social media to tell a different story, to show the world that there is more to the Arab world than the extremists would have them believe.

Stories of successful entrepreneurs, of tech-savvy youth eager to be part of the global community, of tolerant societies and coexistence, of hopeful loving families… These are the stories that should, actually must, be shared.

The killing of Jordanian pilot Muath al-Kasasbeh is a tragic example of ISIS’ horrific extremist views and actions. What are your thoughts on the situation? How has it affected Jordan and its people?

It is very hard to find the words to describe what they did and it is impossible to comprehend how anyone could commit such a despicable act on a fellow human being. It affirmed what we already knew, that

this is a group with no conscience, no dignity, no nationality, no religion and no boundaries.

this is a group with no conscience, no dignity, no nationality, no religion and no boundaries.As the world saw, Jordanians united in their grief and pride in our brave martyr. And our country is determined to confront this ideology of terror and ultra-violence.

You call the media the “not-so-secret weapon in this fight.” How can the media help?

Too often, only bad news counts as news. So, sadly the actions and the narrative of the extremists get the most airtime and have the loudest resonance. We need media to give the platform to moderates all over the world, help raise their voices above the sound of the extremist propaganda. Let their message — their story — be heard.
What role does education (or a lack thereof) have in extremism?

Sixty percent of the Arab world is under the age of 25 — a statistic often referred to as a “demographic gift.” But one-quarter of them are unemployed, which is double the global average, and many more are underemployed. If it’s a gift for anyone, it’s a gift for extremists who want to prey on and manipulate the hopeless.

The bottom line is we cannot defeat an extremist ideology with a bullet.

The bottom line is we cannot defeat an extremist ideology with a bullet. We defeat it when we provide youth with a better, and more sustainable, alternative. Jobs. Equality. Participation. Opportunity.A modern education that empowers youth to question, debate, and respect diversity and pluralism is critical in building better citizens and more tolerant societies.

Tell me more about Edraak, the MOOC portal you launched for the Arab world.

The Arab world desperately needs to reach millions of young Arabs with quality education, and online learning is our opportunity to achieve it. In a nutshell, Edraak.org is a MOOC platform that offers quality university level courses in Arabic, free of charge. We offer original Arabic content by leading Arab professors as well as translated courses from top universities like MIT and Harvard. MOOCs are not new, but until recently, they’ve only been available in English — excluding large numbers of young Arabs.

We launched in May 2014, in partnership with edX.org, and within just two weeks of going live we had over 80,000 registered users from across the region. Today, that number is up to 120,000, and thousands have already completed courses. That is how much of an appetite there is for quality learning in our region.

The education of girls is a proven way to help communities around the world. How can it help the Arab world, specifically?

I’ve always believed that when you educate a girl you empower a nation.

I’ve always believed that when you educate a girl you empower a nation. Contrary to popular belief, though, our region has made good progress in bridging the gender gap in education. For example, in Jordan, we have more women in universities than men, and this is the case in several countries across the Arab world.

At a time when talent is key to any country’s success, as a region, we’re wasting so much of it. According to some studies, we could almost double economic growth rates if women participated at similar rates as men. Removing the barriers to women’s participation can be a game-changer for the region.