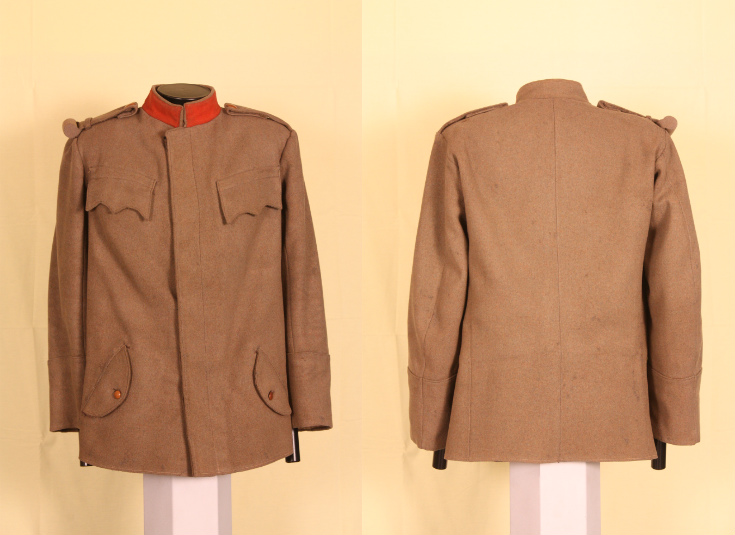 The Serbian army entered the Great War with the simplified uniform that separated lower ranks from higher ranks by small details and was olive-gray (SNB) in color. Many European armies introduced this simplified trend in soldiers’ clothing in the early 20th century, and Serbian military was among the first to do that. Simplification of uniforms also symbolized equality of soldiers on the battlefield.

By the early 20th century, armies of European countries were characterized by colorful uniforms rich in detail. In fact it went so far that in some armies every regiment was distinguished by its own color. However, the new century brought new trends in army’s clothing supported by the observation that the soldier’s suit has to fit into the environment and has to be simplified so that he could move more easily. Moreover, wars required increasing production of military equipment which was very expensive, so this simplification was also useful for state budgets.

The Kingdom of Serbia was one of the first European countries that introduced olive-gray (SNB) uniforms in 1908. In this uniform, Serbian soldiers went through the Balkan wars (1912-1913), not knowing that they would not have time to put it off, as a new conflict was waiting around the corner, a war in which Serbia would take a heavy toll.

Tired and overwrought, the Serbian soldiers were mostly distinguished in this grand theater of world war by a cap called šajkača, which was worn, without exception, by anyone who fought under the Serbian flag. However, not all šajkača caps were the same. Officer’s cap was firm with a sun visor and a cockade (enameled tricolor cap insignia with the king’s monogram), while Field Marshal’s cap included the strap and gold braid on the top.

The cut of Serbian uniform was modeled after the uniform of a detachment of the Austrian army which was staying in Mexico.

Tunic that was used in the Great War was tailored in 1860. It is characterized by a simple cut with a concealed closure with seven buttons and four patch pockets. The upper pockets were specific for having three-point covers. Firm blouse collar stood erected, and labels of the corps and profession were sutured on it. Regardless of color, this practical model was retained up to 1941.

Small details on the blouse made a difference among the soldiers. On the collar were emblems that marked the color of the corps: red designated infantry, blue – cavalry, black – artillery, dark brown – ambulance, maroon – engineers. Officers’ had sleeve loops on upper sleeves, and on the lower sleeves there was a cord in required color of the corps. Another detail by which the officers differed from ordinary soldiers were shoulder straps, whereas Field Marshals had ducal braids on epaulets.

The uniforms for the Serbian army were produced by foreign suppliers, and as a result of that a blouse with lower patch pockets with buttons was worn by some soldiers. Since the late 19th century, Officers Cooperative started producing uniforms for the army.

The Serbian Military Uniforms of the Great War

Serbian soldiers’ overcoat was long enough to cover the upper half of the calves, and was characterized by a two-row buttoning. The officers had deltoid tag on the overcoat collar. Attached to the right shoulder strap was an extra belt that served for carrying a rifle. The soldiers were able to raise the overcoat and button it from the rear to make more space for the legs and move more easily.

The trousers were wide at the hips and narrow at lower legs. The majority of the Serbian army wore the so-called opanci (rustic footwear made of leather), although some soldiers wore boots combined with curlers that offered protection during cold days.

An integral part of the uniform was the pouch usually made of cloth in which the soldiers carried their supplies.

Given that the war lasted for five years, the uniform could not be provided for all, so the great part of the Serbian army was dressed in typical folk clothings. Only the cap šajkača was worn by all Serbian soldiers, until their arrival at Corfu, in January 1916.

The part of the Serbian army that survived the retreat through Albania, arrived at Corfu in torn and disheveled uniforms. After recovery, the Allies gave them new uniforms such as the French “Blue Horizon” (fr. horizon bleu) and the British “Khaki”.

The Blue French uniform was complemented by the “Adrian” helmet, which had the Serbian coat of arms at the front. The trousers of these uniforms were similar to the original Serbian military trousers, and the shirt had an upright collar, undisguised buttoning and patch pocket. British “Khaki” uniforms had bowed collar blouse with two pairs of sewn-on pockets, top and bottom.

These uniforms were mostly worn by the Serbian heroes who liberated Serbia in October and November of 1918, together with French allies. Today, almost all of these uniforms of the Serbian Royal Army can be seen at the Military Museum in Belgrade in the section dedicated to the Great War.

Austria entered the war with the blue uniforms, but because the Austrain soldiers were too much conspicuous on the field, these uniforms were replaced in 1915. with the uniforms that matched terrain in color.

The article supported by The Office for Cooperation with Diaspora and Serbs in the Region.