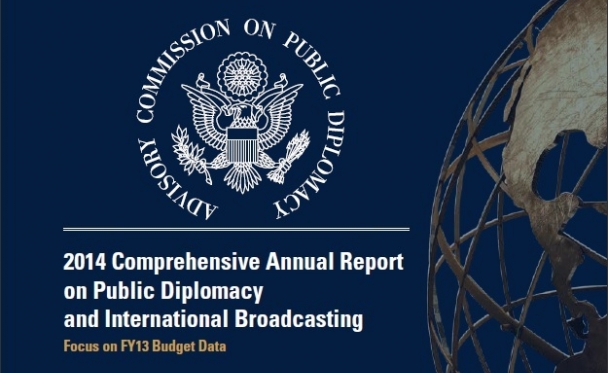 The United States Advisory Commission on Public Diplomacy appraises U.S. Government activities intended to understand, inform, and influence foreign publics. The Advisory Commission may conduct studies, inquiries, and meetings, as it deems necessary. It may assemble and disseminate information and issue reports and other publications, subject to the approval of the Chairperson, in consultation with the Executive Director. The Advisory Commission may undertake foreign travel in pursuit of its studies and coordinate, sponsor, or oversee projects, studies, events, or other activities that it deems desirable and necessary in fulfilling its functions.

The Commission consists of seven members appointed by the President, by and with the advice and consent of the Senate. The members of the Commission shall represent the public interest and shall be selected from a cross section of educational, communications, cultural, scientific, technical, public service, labor, business, and professional backgrounds. Not more than four members shall be from any one political party. The President designates a member to chair the Commission.

The following individuals have been nominated to the Commission but await Senate confirmation as of this writing: Douglas Wilson of Delaware and Markos Kounalakis of California.

To request further information about the meeting or the U.S. Advisory Commission on Public Diplomacy, you may contact its Senior Advisor, Chris Hensman, at HensmanCD@state.gov.

Since 1948, the United States Advisory Commission on Public Diplomacy (ACPD) has been charged with appraising U.S. Government activities intended to understand, inform and influence foreign publics and to increase the understanding of, and support for, these same activities. The ACPD conducts research and symposiums that provide honest assessments and informed discourse on public diplomacy efforts across government. It reports to the President, Secretary of State, and Congress. Currently, the office of the Under Secretary of State for Public Diplomacy and Public Affairs supports it.

Informing and building relationships with critical foreign audiences for U.S. foreign policy requires commitment and patience, and the strategic investment of limited resources (PD and international broadcasting activities make up 3.5 percent of the entire International Affairs budget) to inform, engage and influence foreign publics over the very long term. In order to support these efforts, ACPD has paid acute attention since 2013 on how the State Department and Broadcasting Board of Governors (BBG) conducts research for and evaluation of its activities; the professional development of PD personnel; the openness and accessibility of American Spaces platforms and the ability of officers to engage foreign publics in high threat environments; and other long-term strategic planning issues for PD, like the urbanization and fragmentation of key audiences for U.S. foreign policy.

Measurement and Evaluation of PD and Broadcasting Activities: Knowing when public diplomacy is working can often be elusive, yet measurement and evaluation of public diplomacy and international broadcasting activities is essential for strategic planning. The September 2014 report, Data Driven Public Diplomacy: Progress Towards Measuring the Impact of Public Diplomacy and International Broadcasting Activities, examines efforts underway in State Department public diplomacy bureaus and at the Broadcasting Board of Governors (BBG) to assess the impact of their activities. It makes suggestions on structures and methodologies needed to make foreign audience research more robust, impact assessment more institutionalized, and feedback loops for strategy and tactics more systematic. The report is based on findings from a six-month study of nearly 100 State Department and BBG research and evaluation documents, in addition to dozens of interviews conducted between February and August 2014 with the staff responsible for them.

Balancing Foreign Public Engagement with Security Requirements: Acknowledging that civilians cannot eliminate risk in engaging foreign audiences, ACPD conducted research with the U.S. Institute of Peace, the McCain Institute on International Leadership, and the Truman National Security Project & Center for National Policy, on the views of diplomats, public diplomats, development workers, NGO representatives, military officers, security professionals and Hill staffers of the opportunities and limitations for engagement in high threat environments. On Oct. 24, 2014, ACPD co-hosted the half-day event “Risk, Recruitment and Retention: Engaging Foreign Publics in High Threat Environments,” during which discussions began to assess how, in an era where “zero-risk” environments abroad no longer exist, we can address the question of risk for American civilians working in public diplomacy, diplomacy and development. This issue also expands to the increasing isolation of U.S. foreign public engagement platforms. The May 2015 white paper, “Public Diplomacy at Risk: Protecting Open Access for American Centers,” detailed the potential closure of 21 (of 32) American Centers in the next 10 years due to the Secure Embassy Construction and Counterterrorism Act of 1999 (SECCA), which requires all U.S. agencies in country be co-located on the embassy, consular and annex compounds. While the hardening of our posts through SECCA was a logical and pragmatic response to a host of devastating attacks against U.S. embassy spaces in the 1980s and 1990s, ACPD expressed its concerned that SECCA may be automatically and asymmetrically applied to U.S.-controlled public diplomacy platforms, American Centers and Information Resource Centers (IRCs), regardless of the characteristics of individual cases.

Strengthening Public Diplomacy Professionals’ Development and Advancement: On June 17, 2015, ACPD, in partnership with Meridian International Center and their Senior Fellow, Ambassador Laurence Wohlers, launched “Getting the People Part Right II: The Human Resources Dimension of U.S. Public Diplomacy in 2015“. The report examines how the U.S. Department of State can improve public diplomacy’s effectiveness by rethinking how we are recruiting and selecting public diplomats, improving their training and advancement, and strengthening their influence on policymaking. It builds from the 2008 ACPD report “Getting the People Part Right,” updating much of the prior data on recruitment, selection, training and advancement. Yet this 2015 report also emphasizes that the success or failure of U.S. public diplomacy activities rests heavily on how we nurture and support personnel and create a leadership environment conducive to strategically-based public diplomacy. This is especially important as we aim to recruit and maintain new generations of PD professionals who come of age in an increasingly interconnected and wired world, and are eager to apply their knowledge and experience to connect with global youth and advance U.S. foreign policy. The report provides key findings in five areas and makes 18 recommendations.

Strategic Planning for Global Urbanization and Fragmentation of Publics: In 2014, ACPD partnered with the Atlantic Council to look at how massive urbanization should lead us to recalibrate our public diplomacy strategy and tactics. The issue brief Diplomacy for a Diffuse World, examines how key global trends—the diffusion of power and the rise of individual empowerment—significantly impact the way the United States government must conduct diplomacy and provides actionable recommendations to help build a more comprehensive and focused diplomatic strategy to better embrace the changes brought by these trends.

For any questions, please contact the staff’s Executive Director Katherine Brown at BrownKA4@state.gov and/or Senior Advisor Chris Hensman at HensmanCD@state.gov. The Commission Members and their bios can be accessed here.