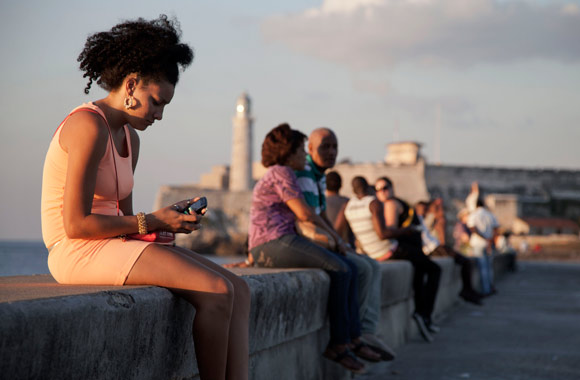 The White House is claiming that a secret programme to build a carefully-disguised “Cuban Twitter”, in order to foment political opposition to the Castro regime, was “not covert” but rather a “discreet” form of humanitarian assistance.

Attempts by Barack Obama’s administration to downplay the nature of ZunZuneo, a social-media website it hoped would facilitate protests in Cuba, are at odds with a major investigation by the Associated Press published on Thursday.

The AP revealed how the programme, engineered by the US Agency for International Development (USAid), was intended to encourage “flash mobs” in Cuba, emulating social media-based protests that had been occurring organically in countries such as Iran, the Philippines and Moldova.

The AP quoted a 2010 memo from Mobile Accord, a contractor involved in the initiative, as saying: “There will be absolutely no mention of United States government involvement … This is absolutely crucial for the long-term success of the service and to ensure the success of the Mission.”

One document quoted by AP said: “Mock ad banners will give it the appearance of a commercial enterprise.”

White House press secretary Jay Carney said on Thursday that while in “non-permissive environments” it was necessary for USAid to be “discreet”, the secret social-media initiative was “not a covert programme”.

“It was a development-assistance programme,” he said, adding: “I am not aware of individuals here in the White House who were involved.” He also said the programme was subject to congressional oversight.

Carney denied suggestions the programme was “under the table” or had “roped in” unsuspecting Cubans.

“This programme has been debated in Congress and reviewed by the GAO [Government Accountability Office], which found it was in accordance with US law,” Carney said.

He said “discretion” was necessary “not because it is an intelligence programme, but to protect individuals”.

Bringing communication tools to “non-permissive environments” was something “we are quite proud of”, he added.

According to the AP, text-message technology was used to circumvent restrictions on the internet imposed by Fidel and Raúl Castro, the brothers who between them have run the communist country for more than half a century.

During the Cold War, the CIA was well-known for its persistent and often inventive attempts to undermine Cuba. However, the ZunZuneo project is quite unlike other US spy initiatives, not least because it appears to have been masterminded by USAid.

The AP said the messaging network was called ZunZuneo – slang for a Cuban hummingbird’s tweet – as a play on “Twitter”. At its peak, ZunZuneo attracted some 40,000 Cuban subscribers – it was closed in 2012, after around two years.

Contrary to the impression given by the White House claims, the initiative also appears to have had a surveillance dimension, according to the AP.

Mobile Accord began building a vast database about Cuban ZunZuneo subscribers, including gender, age, “receptiveness” and “political tendencies”, according to the AP. The AP report said USAid believed such demographics on dissent could help it target its other Cuba programmes and “maximise our possibilities to extend our reach”.

The AP said its report was based on more than 1,000 pages of documents it obtained about ZunZuneo as well as interviews with US officials and company executives involved in the project.

The report raises serious questions about the legality of a project in which extensive steps were taken to conceal links to Washington. It also comes in the midst of draft legislation to rein in surveillance activity in the wake of revelations by the National Security Agency whistleblower Edward Snowden, which have undermined Washington’s reputation abroad.

AP made no mention of whether similar projects were attempted in other countries, although it said it had seen evidence of an unspecified ZunZuneo project earmarked for Pakistan.

In one remark that appeared to suggest the programme, or similar initiatives, may have been implemented elsewhere, Carney said: “Of course the government has taken steps to be discreet but this is not unique to Cuba.”

Other countries, including some European allies, may have unknowingly become involved in the programme, which was run on foreign soil to avoid associations with the US.

Spain, Ireland, the UK, Nicaragua, Costa Rica and the Cayman Islands hosted either servers, bank accounts or companies working on ZunZuneo, and it is not known if they were aware of the true nature of the company. Use of servers in Europe may constitute a breach of data protection law, according to a legal expert quoted by the AP.

The initiative appears to have begun after the US obtained the cellphone numbers of some half a million Cubans through a leak from a “key contact” at Cubacel, Cuba’s state-owned cellphone provider.

The numbers were given “free of charge” to USAid and Creative Associates, a Washington company that has earned hundreds of millions of dollars in US contracts and, according to the AP, was instrumental in the whole project.

Initially the creators saw ZunZuneo as means to disseminate messages to millions of Cubans without the authorities, which control the internet, establishing the source of the communications.

The idea appears to have quickly evolved into a more interactive messaging network, in which users could also interact with one another and organise politically.

USAid’s ambition, according to documents cited by AP, was to build a subscriber base through “non-controversial content”: news messages on soccer and music and hurricane updates.

Once sufficient numbers of Cubans had signed-up, ZunZuneo would become more political, inciting protest or, as one USAid document quoted by the AP put it, seeking to influence “the balance of power between the state and society”.

One contractor involved in the project remarked that there was an “inherent contradiction” in giving Cubans a platform for communications uninfluenced by their government that was in fact financed by the US government and influenced by its agenda.

ZunZuneo’s creators sought commercial backers and, in an intriguing twist, even turned to Jack Dorsey, a co-founder of Twitter, for funding. The AP said Dorsey declined to comment.

USAid was spending tens of thousands of dollars in text-messaging fees to Cuba’s telecommunications monopoly through secret bank accounts, the AP said, and was concerned about the ramifications of its involvement ever becoming public.

The programme started to wind down; users wondered why it had stopped functioning around June 2012.

The Circuitous Route to Becoming an Ambassador

The End of Imperial Diplomacy

Doha: Ambassador Pozderac discusses Serbia and ties with Qatar in an interview for GPDNet
15 January 2021

Being a Diplomat, what does Public Diplomacy mean to you personally and professionally? How would you describe the concept of Public Diplomacy? The post Doha: Ambassador Pozderac discusses Serbia and ties with Qatar in an interview for GPDNet appeared first on Diplomatic portal. [...]