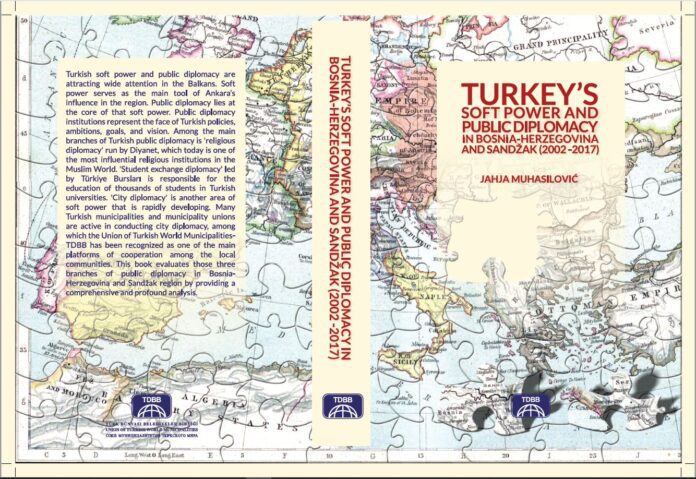 The book named as “Turkey’s Soft Power and Public Diplomacy in Bosnia-Herzegovina and Sandzak (2002-2017)” was published by Union of Turkish World Municipalities (TDBB).

Emerging as a regional power, Turkey’s soft power and public diplomacy has attracted the attention of researchers in recent years. Within this framework, the book mentioned is based on the doctoral thesis submitted at Boğaziçi University in 2020. Written by Jahja Muhasilovic, the book consists of 341 pages.

In the book, the ‘religious diplomacy’ carried out by Presidency of Religious Affairs of Turkey, ‘student diplomacy’ conducted by Presidency for Turks Abroad and Related Communities (YTB) and ‘City diplomacy’ or ‘local diplomacy’ issues that form an important part of the relationship between Turkey and Balkan countries’ are examined in detail by taking the example of Union of Turkish World Municipalities (TDBB).

In this work, emphasizing that Turkey’s Directorate of Religious Affairs is in close relationship and cooperation with the existing religious institutions in the Balkan region, it is stated that Turkey manages an extensive mediation process in Montenegro and Sandzak region of Serbian borders since 2011. In an effort to reconcile the religious institutions that had to be divided into two due to the intervention of the Serbian state, it is also mentioned that it is a good experience for Turkey to mediate in Sandzak region with Directorate of Religious Affairs as a public diplomacy institution and to work closely with Religious Affairs of Bosnia and Herzegovina in this process.

Another area of public diplomacy examined by the book is the “student diplomacy” carried out by YTB. Since 1992, Turkey began to train a large number of foreign students under the project name ‘Great Student Project’. Turkey was mostly focused on students from Central Asia and Caucasus but after 2002, it tended to develop strategies for other regions as well. In 2012, Turkey Scholarship was established for this purpose within YTB. Although the number of students applying for these scholarships has generally increased over time, the number of students applying for scholarships from the Balkans has decreased. In the book, the reasons for these developments are examined and suggestions are made to increase the number of students from Balkan countries.

The ‘City Diplomacy’ section in the work is examined over the studies of TDBB in Bosnia and Herzegovina. ‘City diplomacy’ or ‘local diplomacy’ is a rapidly developing field of public diplomacy around the world. In recent years, serious efforts have been made in this area in Turkey. City diplomacy constitutes an important part of the relationship between the Balkan countries and Turkey. In this area, besides the municipalities, the municipal unions are making an active effort. Bosnia and Herzegovina is one of the countries where TDBB works most actively. Over forty projects have been carried out in this country in the last five years and TDBB has first implemented some of its new applications in this country.

In the book, it is pointed out that the Balkan Peninsula is a major area of ​​interest first for Ottoman Empire then for the Republic of Turkey and because the region was entrance gate to Europe for Turkey, it is back in the area after a longer break occurred during the Cold War. It is also highlighted that soft power and public diplomacy institutions, which are the main instruments of Ankara’s influence in the region, are the visible face of the case of policies, goals and visions of Turkey in the region.

Jahja Muhasilovic was born in 1987 in Sarajevo. He did his undergraduate education at the University of Sarajevo, Department of History. He completed his master’s degree at Istanbul University, Department of History (2015) with his thesis on “Ottoman / Turkish image in Bosnia and Herzegovina’s current history textbooks”(2015) and his PhD. Education at Boğaziçi University with his thesis on “Turkey’s Soft Power and Public Diplomacy in Bosnia-Herzegovina and Sandzak (2002-2017)” (2020). During his doctorate education, he took part in the projects carried out by TDBB in Balkan countries. Muhasilovic is currently working as a faculty member at the International University of Sarajevo (IUS), Department of International Relations.