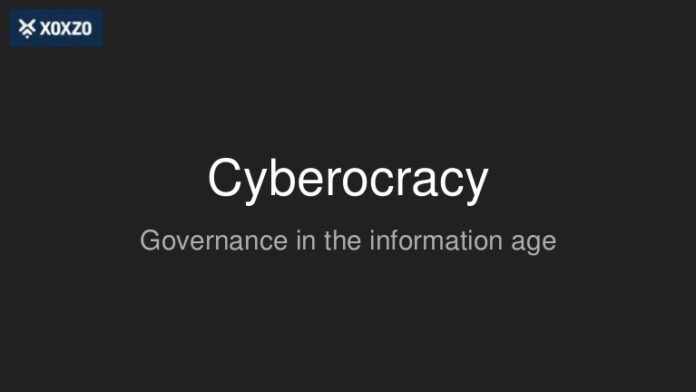 In 1992, David Ronfieldt writing for the RAND Corporation promulgated a futuristic notion that there was a political evolution taking place that would result in the development of a concept he termed “Cyberocracy”. Fast forward to 2021, a lot has changed in terms of technology, the cyberspace and the power of information control. One key example being the recent development in the United States, where President Donald Trump and his ruling party, the Republicans’ narrative on the free and fairness of the US elections was contested not only by the traditional media but by tech giant companies such as Twitter, Facebook and Google. The contestation of a whole government by private technology companies entail the shaping up of new State relations with technology-based companies. This paper intends to postulate the realisation of Cyberocracy from a futuristic envisioning in 1992 to a reality in 2021 going forward. The paper also highlights that this development has direct implications on the developing countries, most of whom are just peripheral users of social media platforms provided by the tech-giant companies and are possibly weak to contest the companies’ actions. These effects will be felt in areas such as political communication, digital diplomacy and many others Zimbabwe and the developing world have come to utilise on the cyberspace.

To put things into perspective, there is a need to define what Cyberocracy is. According to Ronfeldt (1991), Cyberocracy from the roots “cyber” and “‘ocracy, signifies rule by way of information. He contended that as it develops, information and its control will become a dominant source of power as a natural next step in man’s political evolution. This was inline with historical developments where under aristocracy, the high-born ruled; under theocracy, the high priests ruled and in modern times, democracy and bureaucracy have enabled new kinds of people to participate in government (Ronfeldt, 1991:p244). The author goes on to postulate that cyberocracy as a coming evolution would arise from the current revolution in information and communications technologies which may slowly but radically affect who rules, how, and why. It thus extends to control over people, information flow towards and from them among other things. In simple terms, Walch and Walch (1999) indicated that Cyberocracy signifies rule by way of information, especially when using interconnected computer networks.

The cyberspace mostly utilised by many people in Zimbabwe, Africa and the developing world are social media platforms mostly provided by United States technological giant companies such as Google, Facebook, Twitter, WhatsApp among others. Most political leaders across the world have joined these social media platforms for their expanse reach. Some may argue that cyberocracy in Africa started taking shape with the Arab spring revolutions around 2011 when various governments in Algeria, Egypt, Tunisia among others were removed through popular protests. It is important at this point to draw the difference between social media oriented revolutions and total cyberocracy that is shaping up. Bosch, Mare and Ncube (2020) highlighted that in the African context, the growth of the mobile Internet has resulted in the rise of social media platforms, most notably Facebook and Twitter and these social networking sites are used for a range of purposes, from personal connectivity, to various citizenship practices, including political debate and activism. They further argue that social media has emerged as an arena of political communication, widely used by political parties for campaigning, and also by citizens to choreograph various forms of protest. It thus entails user oriented control towards information use and utilisation, which in this case is decentralised.

Nonetheless,  Ronfeldt (1991), he noted that precise definition for Cyberocracy was not possible at present, but could manifest itself in either or both of two ways: a) narrowly, as a form of organization that supplants traditional forms of bureaucracy and technocracy; or b) broadly, as a form of government that may redefine relations between state and society, and between the public sector and the private sector. The two have been realised through active participation of technological giant companies -not the users – in determining information flows during the post US election period by puting cautionary statements on Donald Trump’s tweets or removing some videos, especially after the storming of the Capitol Hill in Washington DC.  The storming of the United States Capitol was a riot and violent attack against the 117th United States Congress on January 6, 2021, carried out by a mob of supporters of U.S. President Donald Trump in an attempt to overturn his defeat in the 2020 presidential election. In return, Google, Amazon and Apple racked down on Parler, a possible plan B social media platform for the Trump and his followers while Reddit, Discord, Shopify, TikTok and Snapchat also imposed restrictions. Donald Trump Jr., one of the Donald Trump’s sons, declared that free speech in the country “died with big tech” and on Facebook retorted that “It’s a sad day when big tech has more power than big government.” This position has found support on both sides of the political divide, and holds a kernel of truth. According to Frier, S. (2021), senior legislative counsel at the American Civil Liberties Union, Kate Ruane had to issue a statement in which she highlighted that, “It should concern everyone when companies like Facebook and Twitter wield the unchecked power to remove people from platforms that have become indispensable for the speech of billions”. Bennett, C. (2021) summed it up by stating that the simple act of tech companies “deplatforming” Trump has highlighted not just how much power they wielded over one of the most powerful men in the world, but more generally their sway over public discourse: who gets to speak and be heard. It is  from this reality that one may argue that cyberocracy is no longer a proposition under futurology but a reality that has implications especially for poor African governments and others in the developing world.

African leaders and governments, with their total reliance on US hosted social media platforms, a political reality on the horizon is that if out of sync with the Big Tech companies’ Artifical Intelligence (AI) deployed expectations, they will be deplatformed or silenced. This falls within what Ronfeldt (1991) postulated as a new distinction is emerging between the information “‘haves” and “‘have-nots.””. He further stated that some actors may become global information powers, but others, notably in the Third World, fear ‘electronic colonization” and ‘information imperialism.” The fear is becoming a present reality. Uganda’s government’s social media communication accounts were blocked by Facebook on 10 January 2021 as the country moved their Presidential elections. In response, the Ugandan government blocked all social media sites through a Ministerial decree. All these developments indicate that Cyberocracy has redistributed power and there are prospects for conflict are increasing due to the use and abuse of new technologies. Wriston (1988) notes that information flows based on the spread of the new technology are undermining traditional concepts of territorial sovereignty and a key expectation about governance is that the new technology benefits society over the state (Ronfeldt (1991). But the new reality, entails that Cyberocracy is leading to the surveillance and censorship of state/government by Big Tech Companies.

Besides the current actions by Big Tech company actions that are related to political communication and electoral politics, there are also prospects of cyberocracy’s implications in the field of diplomacy especially digital diplomacy. Digital diplomacy, also referred to as Digiplomacy and eDiplomacy has been defined by Hanson (2012) as the use of the Internet and new information communication technologies to help achieve diplomatic objectives. Africa Portal. (2020) in an article titled The role of digital diplomacy in state recognition in Africa stated that within the spheres of diplomacy, digital diplomacy has emerged as a facet of public diplomacy that is attainable through the use of digital technologies such as the internet to foster diplomatic communications at limited or low costs. In addition, digital diplomacy plays several roles in the recognition of states, which makes it a potent tool for the promotion of the relations between newly formed states and established ones. It is not surprising that in implementing the new found authority and power, Big Tech Companies such as Twitter and Facebook will block accounts of diplomats and even political leaders when there are issues such as disputed legitimacy, among others that are a regular feature in African electoral politics. It speaks to why Denmark and France as early as 2017 and 2018 appointed ambassadors to high tech who settled in Silicon Valley and full staff embassy compliments, thus establishing a novel kind of diplomatic outposts that recognizes the global clout that U.S. high tech companies now wield (Johnson, 2017). Companies like Apple, Google, and Facebook are increasingly becoming almost superpowers on a global scale and whose push for a cyberocracy may become more evident more than many can realise. If this path continues, in the next 10 to 15 years, demands for cyberocratic governments may be more pronounced, thus threatening developing countries who do not have means to control the cyberspace, at a time it is eating into the traditional sovereignty and power instruments of the State.

To conclude, it is pertinent to note that developments currently obtaining in the United States of America, where Big Tech Companies have played a crucial role in information flow, have implications for Africa and the developing world. It heralds political evolution towards a Cyberocracy that has potential to context whole governments especially in the developing countries such as Zimbabwe, with capacity to cut off platforms of communication. Going forward, politicians and diplomats need to understand that Cyberocracy is no longer a 1992 proposition but a new reality that they need to study and understand how it will impact political communication and digital diplomacy.