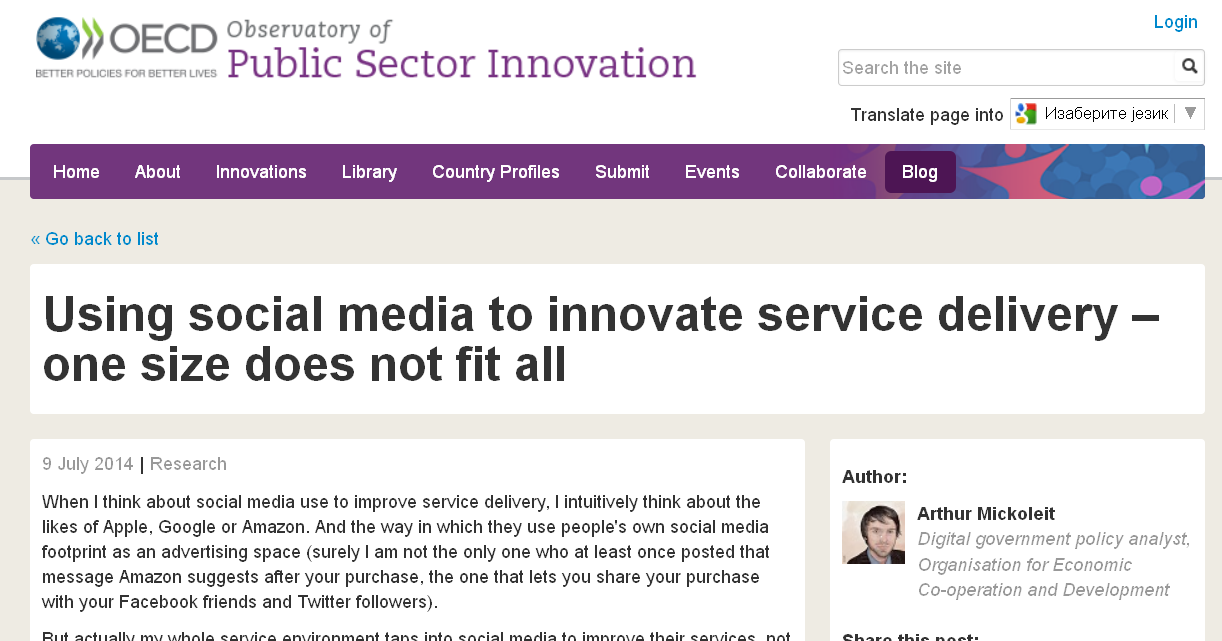 When I think about social media use to improve service delivery, I intuitively think about the likes of Apple, Google or Amazon. And the way in which they use people’s own social media footprint as an advertising space (surely I am not the only one who at least once posted that message Amazon suggests after your purchase, the one that lets you share your purchase with your Facebook friends and Twitter followers).

But actually my whole service environment taps into social media to improve their services, not only the Internet heavyweights. Take the world’s main retailers – WalMart, Tesco, Carrefour – their use of social media to make their services stand out is astonishing. But small vendors too benefit from this new channel to engage their clients. I for example buy all my meat with a local seller whose source is a small community of farmers. Just like the business itself, its social media footprint is rather small, but the blog and RSS feed are enough to keep me and other clients in the loop about the upcoming deliveries, the farmers and the animals, new recipes, etc.

So how does the public sector use social media to innovate its services? It’s probably fair to say that the public sector has not been a pioneer in this field. This was mostly the role of techies, extroverts, journalists and big businesses. But just like my local meat seller found a way to leverage social media for sales, many government institutions have found their way around too. It’s not by accident that some national governments today instantly and directly reach large parts of their population.

For public service delivery agencies, the added value of using social media can be to make their services stand out in an environment of competition. Of course you know Monster.com – and you can surely cite a few more of the thousands of digital outlets that today match those that offer a job with those that are looking for one. These businesses compete with providers of public employment services (PES). And in many countries they seem to do that rather well, e.g. in France where the PES Pôle Emploi advertises the equivalent of only 15.8% of all vacancies filled across the economy (2010 data).

Also facing “market pressures”, the German PES provider (Bundesagentur für Arbeit, BA) took a step back to reflect on how it can use social media to support its mission of bringing people into work. It identified a convenient win-win opportunity for cooperation with the social platform Xing (a LinkedIn competitor for professional networking and very popular in German-speaking countries). Since 2012 employers who post a vacancy on Xing can tick a checkbox to publicise their vacancy at the BA’s online jobs database “Jobbörse”. Jobbörse users are in turn routed to Xing where they can engage with other users, for example to find out more about the vacancy or the employer.

In 2009 the Spanish national police committed to using social media as an additional lever to improve their services. The commitment was backed up with financial and human resources, notably the recruitment of a social media expert, Carlos Fernandez, to lead the effort. Today, a dedicated team uses various channels 17 hours a day (from 8am to 1pm) to inform the public and to prevent, dissuade and combat crime. Their most popular channels are Twitter (over 900k followers), Facebook (over 145k likes) and YouTube (over 5 million video views). Obviously these numbers do not take into account the snowball effects once some of the police’s messages turn viral on the web.

But how does this innovate the police’s core services? Building a social media “fan base” and creating viral messages are only intermediate steps towards mission-critical successes. One of those was the recent arrest of a convicted murderer who had been on the loose for months: on 14 January 2014 the Spanish national police launched a coordinated media campaign with heavy use of social media to diffuse photos and information about the wanted individual. The posts went viral and people’s reports that followed led to the arrest of the convict later the same day.

These few illustrations hardly capture the vast opportunities and challenges for the public sector in this field. But they do underline that successful innovation starts from the mission and purpose of the institution, not from a given channel or technology. Social media use can spur service innovation, but “one size does not fit all”, meaning what works in one institution is not guaranteed to bring success elsewhere: for the German public employment service provider, social media use has been very selective and involved turning a potential competitor into a partner;  for the Spanish national police force social media use covers a wide range of tactics and tools to build communities of confidence over a long term. And for the small business that sells the meat I regularly buy social media use is as simple as maintaining a newsletter and blog to diffuse information to existing customers and maybe attract a few new ones.

We will soon publish a discussion paper that explores in more depth how the public sector can use social media to support its diverse missions. It will be ready in time for the OECD E-Leaders 2014 meeting. Keep in touch via @OECDgov.