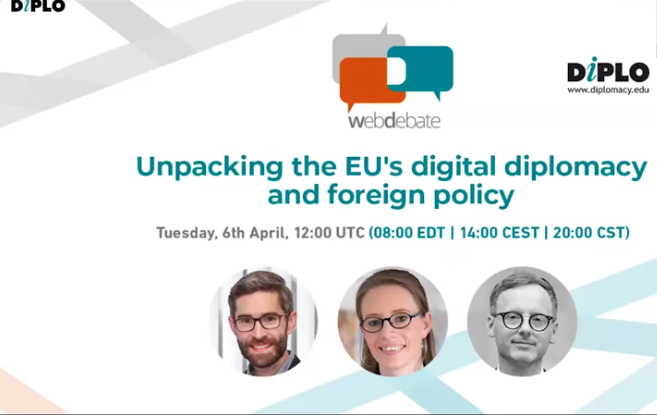 Foreign policies have for many years served as countries’ compass in their relations with each other. With the fast digitalisation of most sectors of society, updating foreign policies to incorporate digital aspects – recognised both as a tool to facilitate diplomatic practice, and a theme on diplomatic agendas – is a natural progression.

In Europe, several countries have introduced strategies that focus specifically on digital topics; others have updated their strategies to include references to digitisation. At a regional level, the EU’s digital strategies are providing the backdrop for even more developments.

In WebDebate #46 (6 April 2021), we took a closer look at how the EU is tackling digital issues in its foreign policy. We looked at whether the EU should develop a dedicated digital foreign policy, and how to inject coherence into the way it coordinates its digital policies. We also asked whether there was a dissonance between digital sovereignty (clearly one of the EU’s ambitions) and digital interdependence (in light of how digitalisation is connecting countries and geographies, and the increasing calls for multilateral solutions).

Many terms have mushroomed in diplomacy-related jargon, including cyber diplomacy and digital diplomacy. Pawlak noted that the terms essentially point to the same concept: diplomacy. Using such a range of terms is unnecessary because it leads to reinventing the mechanisms, instruments, and the whole set of discourses and narratives about diplomacy.

Does the EU need a dedicated policy for digital issues?

Mapping the EU’s digital policies is quite complex. Pawlak explained how foreign policy is dealt with by the vice president of the EU; in addition, two commissioners deal with the digital portfolio; plus, digital issues also have a strong international cooperation component.

Given the complexity, the EU needs to develop a cohesive digital foreign policy which serves as a unifying element that brings the institutional elements together, and serves as an awareness-raising exercise of what each arm is doing.

How can the EU improve the cohesiveness of its digital policies?

Kettemann noted that the EU has made great strides in setting normative standards and in laying the course for the next few years. These standards – such as the General Data Protection Regulation (GDPR) – are respected globally. Improving its strategic orientation would make its policies more cohesive, and would highlight more strongly its work on digital norms. This will enable it to exercise even more foreign policy influence on digital issues by using digital tools. Pawlak also highlighted the need for setting up a council on digital affairs, aimed at bringing countries together to discuss digital issues specifically.

Which objectives should an EU digital foreign policy have?

Referring to his earlier studies, Kettemann highlighted the need to increase the self-determination of people as part of the digitalisation process. This includes informational self-determination, that is, the right of ownership over their personal data. The GDPR is a solid normative framework which has been exported to other countries.

The EU needs to strengthen the link between its strategic capacity to act in the foreign policy fields, and its goals. It also needs to ‘re-sovereignise’ certain parts of the digital landscape – including internet nodes, cloud infrastructure, and international standardisation processes – to allow Europe to continue shaping the rules.

Pawlak highlighted four guideposts, which were recently used to provide orientation for the newly launched Digital Compass, and which can serve to improve policy coherence. The first is sovereignty, which involves making choices that strengthen European technologies and alternatives, while taking a mature approach that explains its policy and tries to get more allies by its side. As interest in the EU’s policies increases, it also becomes more attractive – and hence a bigger priority – for the EU to strengthen its resilience against  cyberespionage or politically-motivated cyberattacks.

The third is to utilise the norms that are inherent in the EU’s regulation to inform a digital foreign policy. The fourth is to tackle the sovereignty/multilateralism dilemma which the EU will face, as a flip side of its digitally sovereign approach. In order to stand behind multilateralism, the EU will need to continue engaging with other countries, which would inevitably put certain constraints on what it can do as a digitally sovereign actor.

What is the diplomat’s role?

From the lens of an observer of EU Council discussions, Pawlak said how in recent years, diplomats with experience in negotiating cybersecurity issues have increasingly broadened the notion of cyber diplomacy to include non-security issues. Kettemann also noted the EU diplomats’ experience in navigating several national positions, making them well-placed to engage international actors with finding solutions to cyber issues.

Both Pawlak and Kettemann agreed on promoting the concept of digital ambassadors or digital attachés. They also noted that this requires a policy which unifies the EU’s efforts in the digital field, and which would then be able to guide the attachés’ work.