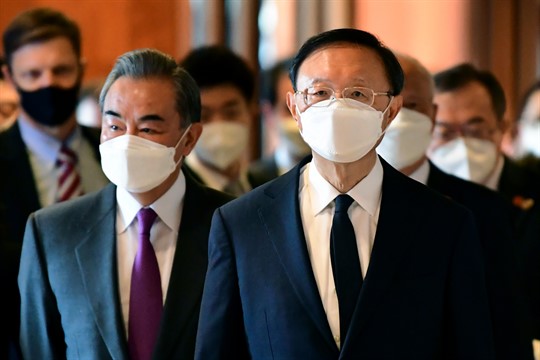 China’s “wolf warrior” diplomacy may have backfired in Australia, Canada and most recently France, but in a sign of its hardening attitude toward the West, Beijing is not backing down from its aggressive posture. Defying diplomatic norms, a growing number of Chinese envoys are adopting a belligerent tone in their speeches and tweets, which Chinese authorities have justified as a necessary response to counter what they call “foreign smears” and to protect “national interests.” While it panders to jingoism at home, such combative diplomacy also reflects the Chinese leadership’s firm belief that the West is in irreversible decline and, therefore, China no longer needs to maintain friendly ties.

Named after two patriotic blockbuster films starring a Chinese soldier who defeats all his enemies, including foreign mercenaries, the “wolf warrior” term was coined in 2019 to describe the newly bellicose rhetoric from some prominent Chinese officials. Zhao Lijian, a spokesperson for the Chinese Foreign Ministry, was at the forefront of this campaign: His controversial tweet of a doctored image that showed an Australian soldier holding a knife to the throat of an Afghan child set off a diplomatic furor with Prime Minister Scott Morrison’s government last December.

The public spat between Yang Jiechi, China’s top foreign policy official, and U.S. Secretary of State Antony Blinken, at last month’s meeting between American and Chinese officials in Alaska, was also celebrated in China as a display of national confidence. “China’s ‘wolf-warrior diplomacy’ in Alaska meeting impresses world,” read the headline of an editorial in Global Times, the tabloid controlled by the ruling Chinese Communist Party. “The arrogant Western world led by the US is no longer eligible to deal with the world’s second-largest economy with a condescending attitude,” the article declared.

Now, those actions have set an example for others to follow, as more Chinese diplomats take to Twitter—a social media platform that remains banned in China—to counter what they see as an “anti-China narrative.” Last week, Li Yang, China’s consul general in Rio de Janeiro, lashed out at Canadian Prime Minister Justin Trudeau on Twitter, after Canada had joined the United States, the United Kingdom and the European Union in sanctioning Chinese officials for human rights violations against Uyghur Muslims in Xinjiang province. “Boy, your greatest achievement is to have ruined the friendly relations between Canada and China, and have turned Canada into a running dog of US,” he wrote, before engaging in playground insults with critics in the replies. “I hate to use this kind of words [sic],” he replied to one. “But we found that polite words don’t work! This is the language they understand!”

That followed a storm that the Chinese Embassy in France had kicked up last month, when it called a French researcher, Antoine Bondaz, a “little thug” and a “crazed hyena” on its official Twitter account. Those insults came in response to Bondaz’s tweet to the embassy, sarcastically offering “a big kiss to you and your trolls” after China’s ambassador in Paris, Lu Shaye, had tried to pressure French lawmakers into not meeting with Taiwanese officials during a future visit to Taiwan. Though the French Foreign Ministry slammed the Chinese comments as “unacceptable” and summoned the ambassador for a meeting, the Chinese Embassy defended them as “a legitimate counter-attack to provocative remarks from a so-called China expert,” without naming Bondaz.

Not to be outdone, the Chinese Embassy in Ireland last week tried to push back on the “wolf warrior” criticisms, which Beijing has lambasted as a “racist” portrayal of its diplomats—even though Chinese state media uses the term itself, and Chinese diplomats seem to relish how antagonistic they are. But the embassy’s tweet—which began by asking, “Who is the wolf?”—instead left most people baffled. “In his well-known fable, Aesop described how the Wolf accused the Lamb of committing offences. The wolf is the wolf, not the lamb. BTW, China is not a lamb.” Something was obviously lost in translation. The embassy later deleted the tweet.

“There’s always been this performative aspect of being an official in the party structure,” Margaret Lewis, a law professor and China specialist at Seton Hall University, told The Guardian. “But we’re hearing it louder now.”

Though this aggressive style of communication may alienate Western countries, in some cases, it works in Beijing’s favor. Signaling strength and threatening costs for crossing China may lead to friction with some countries, but it could cow others, especially ones that are dependent on Chinese trade, as Chong Ja Ian of the National University of Singapore told The Australian. Bhutan, for one, has largely remained silent about China’s gradual encroachment on its territory, as Beijing has tried to secure more access close to its disputed border with India. The Chinese Embassy in Ireland may draw laughs and ridicule for its muddled analogy, but it did get one thing right: While China constantly paints itself as a victim of “slander” and false narratives, it is not a lamb.

Rachel Cheung is a freelance reporter based in Hong Kong. Her work has appeared in the Los Angeles Times, The Washington Post and Nikkei Asian Review, among other news outlets, and she was previously a reporter at the culture desk of South China Morning Post.