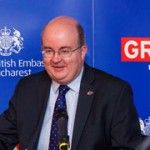 It was great to have the opportunity to speak to our 1,750 new Chevening Scholars yesterday at the exuberant event that is Chevening Orientation. This is what I said.

Chevening is a place.

It is a large rural mansion house in the English county of Kent, to the south-east of London, built in the early 17th century.

The story of how this country house gave its name to the Chevening scholarships programme is closely linked to the history of an English aristocratic family named Stanhope.

The title of Earl Stanhope was created in 1718 for James Stanhope, a prominent military commander who then pursued a career as a politician, supporting the Hanoverian Succession and thus the reign of King George I. He became Prime Minister in all but name, and indeed he is sometimes described as Britain’s first Prime Minister, a title which goes officially to Sir Robert Walpole. He had purchased Chevening House in 1717, and greatly extended it, befitting his new status.

Stanhope was sadly tainted by the scandal around the South Sea Bubble, named after a company created to consolidate and reduce the cost of the national debt, whose collapse ruined many people. Following a particularly tough debate in the House of Lords, Stanhope took ill, and died.

His successors as Earl combined to varying degrees political and public service, scientific enquiry and eccentricity.

The Third Earl was a politician sympathetic to the French Revolution. His was somewhat a lone voice in parliament on the matter. He was also a noted scientist, giving his name to a printing press and a lens.

The Fourth Earl is best remembered today for his association with the Kaspar Hauser case. This related to a young man who turned up in the German city of Nuremberg in 1828 claiming to have been raised alone in a darkened room, knowing nothing of his identity. Stanhope befriended Hauser, became his foster father, and launched investigations to establish his background, the fruitlessness of which however ended up convincing Stanhope that Hauser was a liar and fantasist. Hauser obtained a deep wound in his chest in 1833, saying a stranger had stabbed him. Stanhope thought it had been self-inflicted. Either way, it was a serious injury. Hauser died shortly afterwards.

The Fifth Earl, a parliamentarian and historian, was one of the main proponents of the National Portrait Gallery, opened in London in 1856.

James Stanhope, the Seventh Earl, was a Conservative politician, whose many roles included those of Leader of the House of Lords and, in the run-up to the outbreak of the Second World War, First Lord of the Admiralty. He was one of the politicians accused in some quarters of failing to prepare Britain for the Second World War, and taking an excessively soft line towards Nazi Germany.

James Stanhope had a problem. His wife had died young. He was childless, with no close relatives. As he approached the end of his life, he began to think of his legacy. He wanted to create a lasting reminder of his family’s long and close ties with political service. What he alighted on was the Chevening Estate Act of 1959, designed to ensure that the house would play a key part in public life.

Ownership of the house was vested in a Board of Trustees, charged with maintaining it as a furnished country residence for a suitable Nominated Person. The nomination is made by the Prime Minister, but the Chevening Act limits who they can choose, to Cabinet Ministers and descendants of King George VI. The Nominated Person from 1974-80 was His Royal Highness the Prince of Wales, but following his purchase of Highgrove in Gloucestershire the Nominated Person has usually been the Foreign Secretary.

And this brings us to the second answer to the question, what is Chevening?

Chevening is a scholarship programme.

It was launched in 1983, thirty-six years ago, as the Foreign and Commonwealth Office Awards Scheme, aimed at bringing exceptional individuals from right around the world to study in the UK. It unites students with world-leading UK universities, helping you to develop your potential as future leaders in your chosen fields. In 1994 it was decided that, though the scheme was great, it needed a snappier name, and the new choice, Chevening, took its title from that house in Kent, the official country residence of the Foreign Secretary.

The Chevening programme has grown, this year welcoming all of you, some 1,750 great students from 141 countries and territories, who will be studying at 117 UK universities. Graduates of the scheme have gone on to glittering careers. The first Chevening alumnus to become Prime Minister of their country was Rinchinnyam Amarjagal in Mongolia in 1999, and he has been followed by many more.

But whether it is in politics, or health, or education, or civil society development, graduates of the programme are transforming lives and communities in their home countries. As UN sustainable development goal 4 puts it, obtaining a quality education is the foundation to improving people’s lives and sustainable development. The Chevening Scholarships programme will not in itself make you an agent for positive change in your country. You have been selected for a Chevening Scholarship because that potential is already within you. But the scholarship will help you realise it.

Chevening is a community.

This process of building Chevening as a community starts today, at Orientation, and continues through your time in the UK. The academic programmes you will be undertaking will keep you busy, very busy, but Chevening is not just about your courses of study. You have opportunities to help understand and transform communities in the UK by volunteering with charitable organisations ranging from The Prince’s Trust to Oxfam. Volunteering is a great way of connecting with the UK beyond your university.

Rayon McLean, a Chevening Scholar from Jamaica, volunteered with youth theatres, and put it like this:

“Volunteering for this cause was my quickest way of connecting to the heart and soul of London. It brought me beyond the surface and into a London where communities are being built through art and courage.”

And do take the opportunity of your time in the UK to explore its nations, cities and countryside. The Chevening Relay provides a great spur to getting out and about. This is not just a competition between red and blue batons. Gerald the Giraffe managed to visit quite a few relay sites last year. He thinks he can do even better this one.

So from a country house in Kent, the name of Chevening has become associated with not just a prestigious scholarship scheme, but also with a global community of 50,000 leaders and change makers, their numbers increasing every year, bonded together by their Chevening experience. I think James, the Seventh Earl of Stanhope, should feel pretty happy with that.

Have an awe-inspiring year. Change the world.