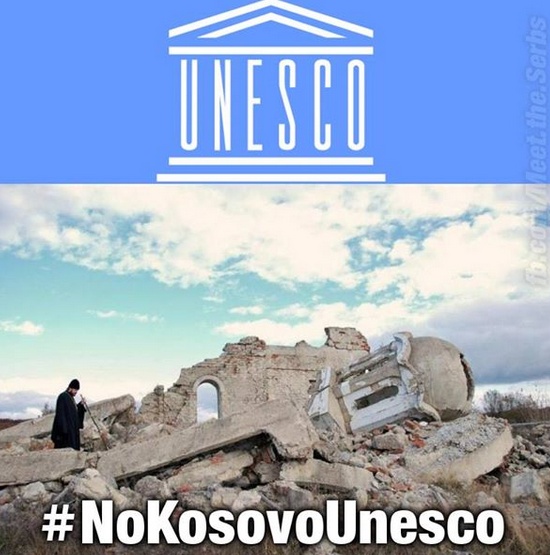 • Because the request for its membership is a serious breach of the international law, the Constitution of UNESCO’ The legally binding UN Security Council resolution 1244 (1999) and the Charter of the UN whose Article 25 says that “The Members of the UN agree to accept and carry out the decisions of the Security Council in accordance with the present Charter”.

• Because according to the UN Security Council resolution 1244, which reaffirms the sovereignty and territorial integrity of the Federal Republic of Yugoslavia (now Serbia), Kosovo and Metohija is an integral part of the Republic of Serbia, under the administration oBf the UN. Since Kosovo cannot be considered a State, it does not fulfill the basic requirement for membership set out by the UNESCO Constitution.

• Because unilateral attempts such as this one seriously harm and disrupt the dialogue between Belgrade and Pristina, under the auspices of the European Union in which mutually acceptable solutions for many complex issues have been devised so far. The issue of the Serbian cultural heritage and the property of the Serbia Orthodox Church has not yet been discussed within the dialogue where it belongs.

• Because this is an unacceptable politicization of UNESCO which should not overtake the competences of the UN. Security Council as the highest authority for the preservation of the international peace and security. UNESCO should not serve as an instrument for the affirmation of an illegal and unilaterally declared independence of a part of the territory of one UN member state. The primary goal of UNESCO is to promote universal values of humanity through education, science and culture not to make political decisions with regard to the statehood.

• Because this would be a dangerous precedent, harmful for many states. This would open the door for other entities to follow the same path thus threatening territorial integrity and sovereignty of other member states.

• Because this issue is polarizing the membership of UNESCO.

• Because, besides not being a state, Pristina does not have moral credibility for membership. Anyone aspiring to UNESCO membership must prove not only in words but as well in deeds its commitment to the goals of the UNESCO Constitution, which certainly is incompatible with deliberate, systematic, vandal demolition of Serbian cultural and historic monuments with the aim to remove the traces of centuries-long existence of Serbs in this area as well as the impunity of the perpetrators of such barbaric acts unworthy of the 21st century. These acts are comparable only to the acts of destruction of cultural heritage by terrorist groups in the Middle East and elsewhere that the world is witnessing and UNESCO is strongly condemning.
.
• Because four Serbian orthodox monasteries are inscribed on the UNESCO List of World Heritage in danger although the armed conflict in Kosovo is over for many years now. In danger from whom?

• Because the inclusion of this item in the provisional agenda of the 197th session of the UNESCO Executive board raises serious concerns about the compliance with procedure and the respect of the established UNESCO rules. Just to mention that that even publishing of the document on the unacceptability of Kosovo’s application for UNESCO membership from the standpoint of the international law, prepared by Serbian Delegation to UNESCO, as an official document, as we requested, was refused. And the only intention was the voice of Serbia also to be heard.

• Because we all would have to live with the negative consequences of such an irresponsible decision from the lesioning of the international law up to the fate of the Serbian cultural heritage in the province of Kosovo and Metohija which not only belongs to the Serbian people but also represents a part of the historical and civilizational heritage of modern Europe and the world.