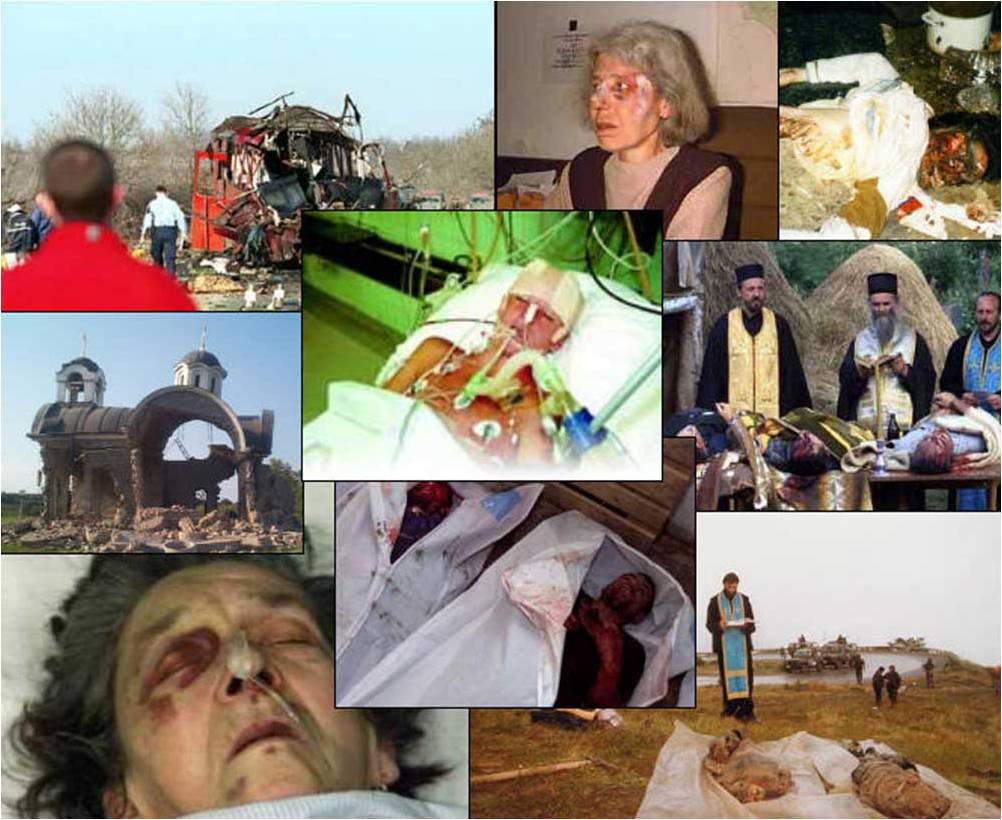 In March 1999, at the direction of the United States of America, NATO engaged in its first act of illegal aggressive war, beginning what can be called the “dark age of intervention” in which we are living today.

One of the bombed sites in Serbia by NATO in 1999 – Photo: Novosti

The fact that NATO was allowed to get away with the aggression on Serbia and Montenegro emboldened US/NATO and the US military industrial intelligence banking complex and since that day, under a doctrine of Responsibility to Protect, Humanitarian Interventionism, Preventive War and then the all encompassing “War on Terror”, US/NATO have proceeded to destroy country after country and do away with leaders that they have not found to be submissive enough to their will.

The events of 9-11-2001 were a watershed moment for the geopolitical architects and served as a catalyst to allow them to expand their military machine to every corner of the world and invade countries at will and conduct operations with complete disregard for international law and accepted international norms.

Fifteen years have passed since the beginning of NATO aggression against Serbia and Montenegro (24 March 1999). This aggression resulted in the loss of 4,000 human lives, including 88 children, and 10,000 people were severely wounded. Over two third of these victims were civilians. How many human lives have been lost in the meantime due to the consequences of weapons with depleted uranium, as well as of remaining cluster bombs, will hardly ever be established.

Breaching the basic norms of international law, its own founding act as well as constitutions of member countries, NATO was bombing Serbia and Montenegro during 78 days continuously destroying the economy, infrastructure, public services, radio and TV centers and transmitters, cultural and historical monuments. NATO bears responsibility for polluting the environment and endangering the health of present and future generations.

Economic damage caused by the aggression is estimated at over USD 120 billion. War damage compensation has not yet been claimed, and judgments ruled by our court, by which the leaders of aggressor countries were convicted for the crimes against peace and humanity, were annulled after the coup d’état in 2000.

Governments of aggressor countries seized and occupied the Province of Kosovo and Metohija, and then formally delivered it to former terrorists, separatists and international organized crime bosses. An American military base was established in the Province – “Bondstill”, one of the largest beyond the U.S. territory.

After the aggression, over 250,000 Serbs and other non-Albanians have been forced out the Province of Kosovo and Metohija; even today, 15 years later they are not allowed to return freely and safely to their homes. Ethnic cleansing and even drastic change of ethnic population structure are tolerated by so called international community if only to the detriment of Serbs. The remaining Serbian population in the Province of about 120.000 continues to live in fear and uncertainty. Attacks upon Serbs, detentions and killings, including liquidations of their political leaders, have been continuing up to these days, and nobody is held responsible.

NATO aggression against Serbia and Montenegro (FRY) in 1999 is a crime against peace and humanity. It is a precedent and a turning point towards global interventionism, arbitrary violation of the international legal order and the negation of the role of the UN. The “Bondstill” military base is the first and crucial ring in the chain of new American military bases reflecting strategy of expansion towards East, Caspian Basin, Middle East, towards Russia and its Siberia natural resources. Europe has thus got overall militarization and the new edition of the strategy “Drang nach Osten” (“Thrust to the East”). Destabilization and the tragic developments in Ukraine are just the most recent consequence of that strategy.

15 years after objectives of US/NATO military aggression continue to be pursued by other means. Serbia has been blackmailed to de facto recognize illegal secession of its Province of Kosovo and Metohija through so called Brussels negotiations. The most of the puppet states of the former Yugoslavia are much dependant on and indebted to the leading NATO/EU countries, their financial institutions and corporations so that they could hardly be considered independent states but rather neo-colonies. There is no stability in the Balkans, redrawing of borders has not ended, overall situation is dominated by devastated economy, unemployment, social tensions and misery. Europe, particularly its south-east regions, are experiencing profound economic, social and moral crisis.

Preparations for NATO military aggression against Serbia and Montenegro (FRY) and 1999 aggression itself have been used in the meantime as a blueprint for many other NATO aggressions and occupations – Afghanistan, Iraq, Libya, Mali and so on. Wherever NATO undertook “humanitarian intervention”, like in former Yugoslavia, it left thousands of dead and mutilated, millions of refugees and displaced persons, ethnic and religious divisions, terrorism and separatism, economic disaster and social misery.

NATO expansionist strategy made Europe militarized. There are more US/NATO military bases in Europe today than at the peak of the Cold War era. What for? NATO imperial expansionist strategy has provoked new arms race with unforeseen consequences. Who really needs an organization threatening global peace and stability?

During and after the aggression, 150 Serb monasteries and churches built in the Middle Ages were destroyed. Killed or abducted were some 3,500 Serbs and other non-Albanians, and fates of many of them have not been established until today. Not even one of the thousands of crimes against Serbs in Kosovo and Metohija got a court clarification. Even such terrorist crimes as was blowing up the “Nis-express” bus on 16 February 2001, when 12 people were killed and 43 wounded, neither the murder of 14 Serb farmers reaping in the field in Staro Gracko, on 23 July 2009 remained without thorough investigation, be it by UNMIK, be it by EULEX, or by any other of so many structures of the so called international community.

The Swiss senator, Dick Marty, revealed documented report on trafficking in human organs of Serbs abducted in Kosovo and Metohija. The Parliamentary Assembly of the Council of Europe, the oldest European democratic institution, adopted his Report as the official CE document. Although all factors stand verbally for an efficient investigation and bringing the perpetrators to justice, for many years now there have been no results whatsoever. The documentation on human organ trafficking submitted to The Hague Tribunal had been – destroyed!