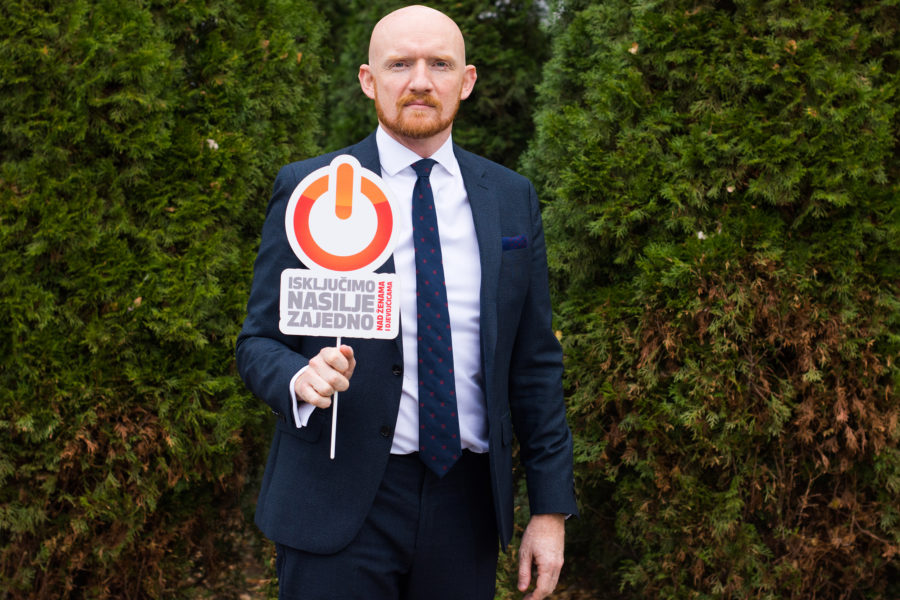 Along with many others across Bosnia and Herzegovina (BiH), the UK Embassy is currently marking ’16 Days of Activism’ to combat violence against women. Why only 16 days, you might well ask, and what does this mean for the other 349? By giving this critical problem a defined period of focus, running from 25 November (International Day for Elimination of Violence against Women) to 10 December (International Human Rights Day), we shine a light on the different forms that violence against women takes, hoping to motivate and energise fighting this phenomenon all year round.

I want now to concentrate on one particular aspect of violence against women, attacks targeted at those in public life, and politics in particular. What is the experience of women in the parliamentary ‘House’? Earlier this year, the Westminster Foundation for Democracy carried out some ground-breaking research into this subject in BiH. For the first time, speaking to 89 female politicians from across the country, and at different levels, the study examined their experiences.

The picture is disturbing. The great majority report persistent harassment and abuse, linked to their activities in politics, clearly amounting to a pattern of violence and intimidation. And yes, there are many men in politics here who could identify with this kind of pressure and criticism. But there are particular features of this violence against women in politics that make it more severe, and its consequences for BiH society as a whole more serious.

“They made these photomontages of me, made it look like I was somebody’s mistress. They ran statements to the effect that I was in all kinds of relations with the mayor. My family had a horrible time.”

The study, and the examples it includes, make difficult reading. But such evidence is not hard to find, particularly in online news portals or the social media accounts of prominent women in BiH. The nature, graphic detail, and vitriol of such attacks go far beyond those typically experienced by men in politics. It is demeaning and belittling, and deliberately so. It is meant to tell them they do not belong in public life.

“Every time I went down the steps in the council hall to take the floor, and I did that often, they would make comments along the lines of ‘You think you are clever, don’t you?’ Can you imagine you walk past and they make comments about your bum, laugh at you. ‘Have you put on some weight, luv?’, ‘Have you lost any?’ No male colleague was heckled so. You cannot be a professional, nobody respects you.”

Why does this happen? Most likely it is because the sight of women taking a prominent role in decision-making, allocating resources, and leading, is a direct challenge to many. And this makes the ultimate objective of such attacks, both in the short and long-term, the forcing out of women from political life, and the silencing of their voices.

But this kind of behaviour need not only come from men. Gender stereotypes and biases are present in the thinking of both men and women.

“After a discussion about this or that bill, a journalist, a woman, stops in front of the White Hall in the parliament building and asks you about your husband’s career, or why you are dressed the way you are, so they run a picture of you with comments on how my handbag goes with my boots. But she will ask my male colleague about the things I have just talked about in the session.”

BiH is certainly not alone in facing these challenges, and the patterns can be seen around the world, including the UK. But failure to tackle them is at least partly driving the relatively low levels of female participation in politics here – in 2018, 23.55% of those elected state and entity legislatures were women, placing BiH 92nd in the world. Quotas have pushed the number up so far, but as long as violence against women in public and political life is perceived as ‘normal’ behaviour and ignored– as two-thirds of those in the study reported – then many potential representatives and leaders will likely feel it is not a price worth paying.

The study concludes with some ideas on what can be done to address these issues, including filling gaps in the law. It strongly encourages parties, parliaments and other institutions to have clear codes of conduct for addressing sexual and other forms of harassment. It calls for media to examine closely their editorial policies for bias against women, and to consider closely how they present women in politics and attacks on them. And it looks to law enforcement and judicial authorities to train their staff to take seriously and properly investigate such attacks when they occur, including online violence. Political parties can do more to strengthen and empower women within their political parties by making gender equality a principle in their party documents and structures, and by creating an enabling environment.

But there is a role for all of us. It is a little under a year until the next BiH elections. Let us all call out bias and violence when we see it, to protect the right of female politicians to have a voice and use it, and to show that we also believe that women belong in political life. When we all speak up and address or question negative bias, attitudes and behaviours, including our own, it will create a better environment for all of us.