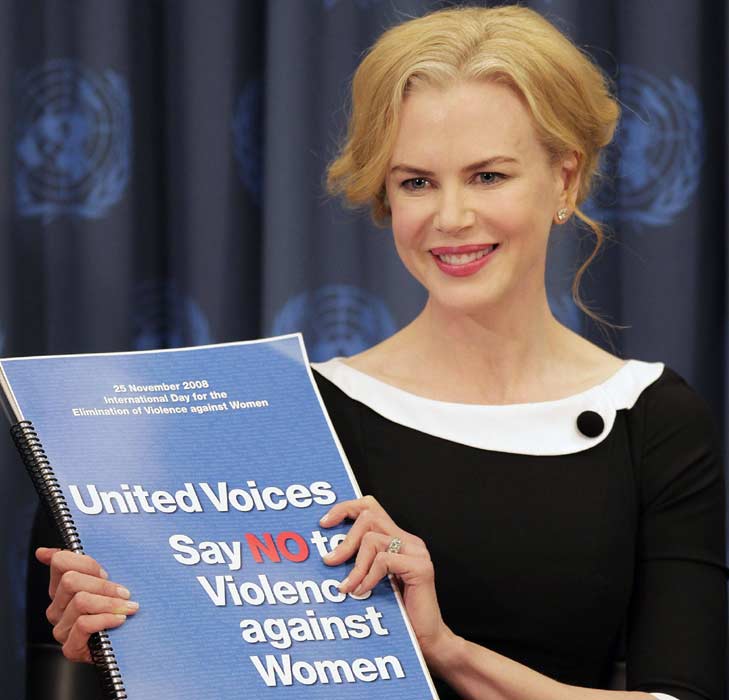 Celebrity sells. Nicole Kidman stretches back on a first-class leather seat as the new face of Etihad Airways in commercials launched last week – or a “brand ambassador” in marketing-speak. The Oscar-winning actor has spruiked vitamins in a field of sunflowers, featured in misty perfume ads, and flogged expensive watches. It just so happens she is also a “Goodwill Ambassador” for the United Nations, lending her “name, talent and time” to highlight violence against women around the globe.

Leonardo DiCaprio works with the UN, too. “Not as an expert, but a concerned citizen,” he declared last September from the green-marbled podium of the General Assembly, expressing alarm about global warming.
Advertisement

“I pretend for a living,” the film-star warned the gathered leaders, “you do not”, and demanded the reality of climate change be urgently confronted.

Almost 2 million YouTube viewers have since watched DiCaprio’s short speech, far more than the typical audience for a prime minister or president propounding in dulcet tones inside the same hall. The online plaudits also flowed for Emma Watson – of Hermione Granger in Harry Potter fame – when she delivered an impressive speech on feminism at another UN forum.

“Celebrity diplomacy,” as it has been called, is not new or entirely unique to the UN. When I sat down to write this column, I expected to have a Peter Costello reaction, of the type when pop singer Pink complained about the Australian farming practice of mulesing sheep. “I don’t know if Pink is an expert on the sheep industry,” a smirking then-treasurer shot back.

That’s the obvious risk whenever a celebrity attaches themselves to a cause. U2 frontman Bono’s activism is regularly a punchline, and I confess to a reflexive “what-would-she-know” thought when a headline flashed across my screen about Geena Davis – of Thelma and Louise – stumping up for a recent presentation at the UN headquarters. Not another star strangled banter. Famine or poverty is often a symptom of deep political tensions or strategic rivalry, the stuff of true diplomacy.

But that was unfair. Shamefully so. Davis was actually speaking about the entertainment industry, with its power to shape public attitudes, and warning it would take 700 years for female characters to match the prevalence of male role models in movies and television programs.

So feeling annoyed with myself for leaping to conclusions, I arranged to interview Maher Nasser, the head of the UN Outreach Division in New York, the person effectively in charge of deciding which celebrities are designated as “Messengers of Peace”. I wanted to ask about the advantages and potential pitfalls of attaching a superstar to a cause.

“We do a lot of due diligence, research to make sure there aren’t any issues that could compromise the UN reputation or the relationship with the celebrity,” Nasser explained.

“We don’t choose somebody just for being famous and being able to attract attention. We also need to see, for a number of years, a commitment and involvement in the issue.”

But as the actor himself acknowledged, there is no pretending a celebrity is an expert. The plain and simple truth is a celebrity’s profile – not to forget social media reach – is a commodity. A celebrity is tailor-made to create awareness, selling products or soliciting donations.

Angelina Jolie’s recent appearance at refugee camps on the Syrian border, Nasser explained, had “ignited the wave of contributions” at a time UN agencies had been suffering a financial shortfall.

The risk of celebrity attachment is oversimplification of the problem and the potential solutions. Zambian economist Dambisa Moyo calls it “glamour aid”. Heavily stylised photographs of stars sympathising with suffering masses are certainly a modern cliche.

There is also the danger that a cause with a high-profile advocate will hog attention, while more worthy but less sexy problems are ignored.

Another sceptical academic goes further, calling the phenomenon of celebrity diplomacy the “theatre of pity”, a kind of narcissism in which the public is equal participant, hankering for “authentic” displays of emotion from big screen idols.

The critics have a point, but equally, the commitment to solving any problem has to start somewhere. Recognising complexity comes with understanding, and if a celebrity wants to to join a cause, maybe this will inspire someone or a group who really can find a solution.

It also runs both ways. Basketballer Dennis Rodman’s cosy friendship with North Korea’s Kim Jong-un has generated plenty of controversy. And in a fashion, Ronald Reagan was the ultimate celebrity diplomat, the actor-turned-president.

I found Nasser’s pragmatism about all this reassuring. “[It] sometimes leads to a successful partnership, and, as with anything else in the world, sometimes not.” Some celebrities fall short in initial talks – Nasser declined to give any names – when a commercial contract has been seen to clash with the goals of advocacy.

Sure, cynically, the UN endorsement might give a celebrity a profile boost, with some risk to reputation if comes across as fakery. But given fame is so often facile, it is hard to fault an attempt to give celebrity purpose.

In the end, I find myself convinced by the favourite wisdom of showbiz – “if you’ve got it, flaunt it”. Even for a cause.

Daniel Flitton is a senior correspondent.