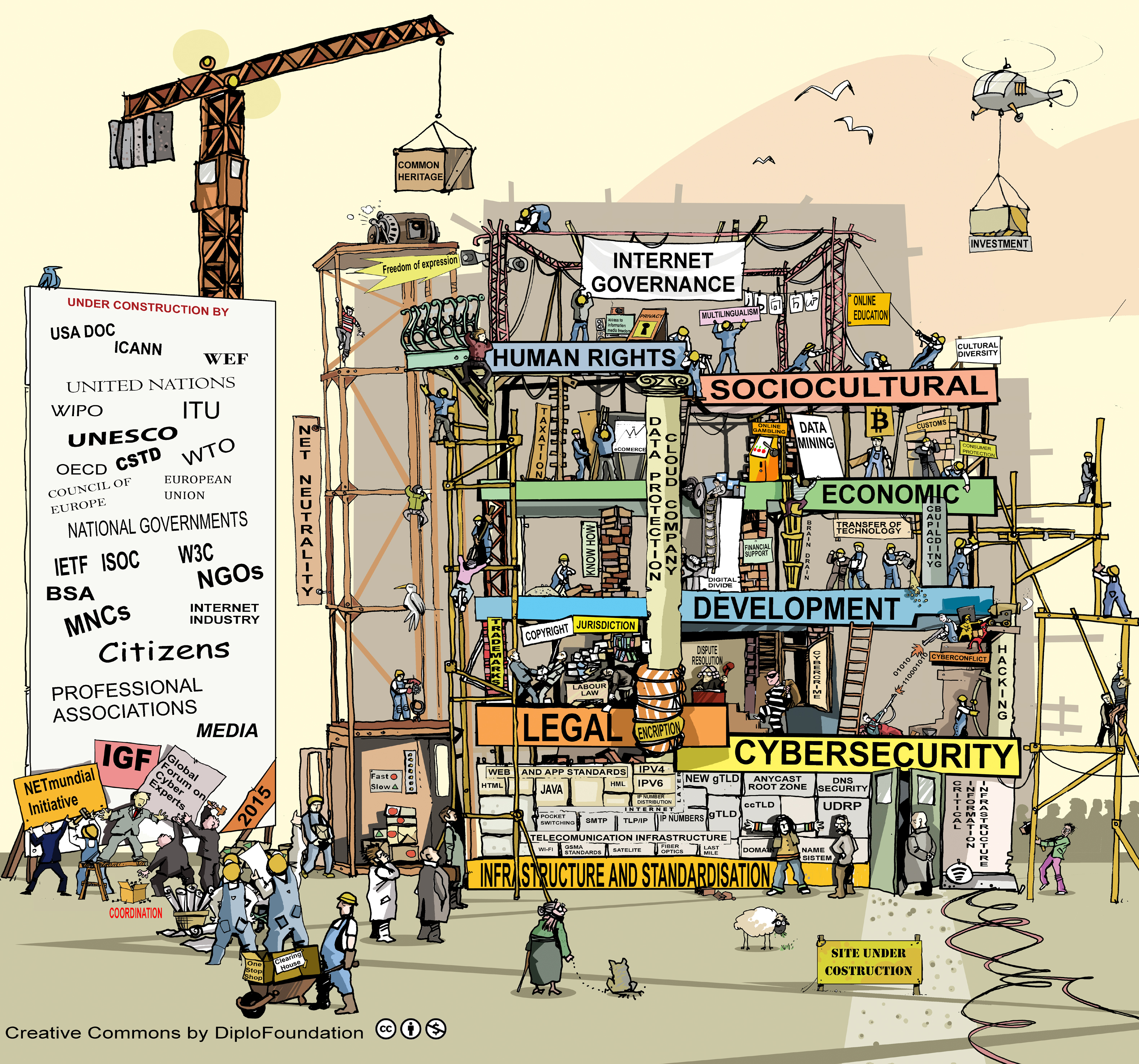 Earlier this week I attended a workshop on Internet governance organized by Esglobal with ICANN and Telefonica. The first session raised the interesting question of whether Internet governance offered a new model of international relations. The argument seemed to be that in a world of heterogenous international actors, including NGOs, companies and civil societies as well as governments, the multi-stakeholder governance of ICANN offered a better approach to managing international (or transnational) relations than the Westphalian state-based model. At first sight this seems plausible. Both the talks on climate change and the World Trade Organization talks have seen heterogenous coalitions built of governmental and non-governmental actors brought together by shared interests or objectives rather than shared ideologies. Analogies with the governance structures and processes of ICANN seem convincing. But there is a confusion of cause and symptom. The similarities result from underlying power structures and their evolution. The details of ICANN governance reflect the geopolitical power balance of the moment of ICANN’s creation, in a period of US hegemony often described as globalization. As US hegemony declines and as globalization fragments (together with the rule sets that govern it), ICANN’s model of Internet governance will increasingly come into question. The pressure will only continue as the number of internauts in countries that do not share ICANN’s cultural or political assumptions begins to outnumber those in countries that do. If we seek alternatives to Westphalian models of international relations that help us navigate in a world of heterogenous and multi-level networks and conflicting policy agendas, we might do better to look at non-European models, or, possibly even more profitably, pre-Westphalian European models. The Holy Roman Empire might offer a better analogy for 21st century global governance than ICANN.

This confusion of cause and symptom is analogous to that between means and ends that bedevils Digital Diplomacy. The rot began with Public Diplomacy, where I must confess guilt for my own small part in that “confusion fell upon our thought”. In the early stages of the debate on public diplomacy, despair at the ineptitude of most attempts by diplomats to communicate with foreign publics or opinion formers led perhaps to excessive zeal in promoting the benefits of public diplomacy. Good public diplomacy is indeed a crucial element in the implementation of diplomatic strategies. But it is essentially a tool. The over-selling of public diplomacy, encouraged by some rather odd interpretations in Europe of Joseph Nye’s concept of “soft power”, had two main outcomes: the elevation of nation-branding and the conversion of public diplomacy from a tool of diplomacy into an end in itself.

Nation-branding is one of the more curious inanities to afflict diplomatic studies. The idea that a country can recruit consultants to create a brand for it is inherently absurd, as shown by Tony Blair’s effort to rebrand the UK as “Cool Britannia”. While there may be merit in seeking to manage and highlight a nation’s reputation, a reputation is not the same as brand and cannot be constructed from scratch or artificially. To make the point, I once showed advertisements for Armenia and Azerbaijan, culled from CNN, to students in the Diplomatic Academy in Armenia. I had first removed the names of the countries from the advertisements. The students could not tell the advertisement for their country from that of their bitterest enemy. And yet nation-branding consultants continue to make their millions and Spain appoints a high commissioner for the national brand.

This is not to say that the social media are not useful tools in pursuing diplomatic objectives. But they are only tools, and they are not, or should not be, the whole story. The excessive focus on Digital Diplomacy as social media can be a distraction, and even undermine the standing of more senior diplomats who try too hard to promote their social media presence. To the extent that social media and Digital Diplomacy are seen as synonymous, we miss out on more innovative ways of using the new technologies. While the U.S. already uses the full range of modeling techniques, especially those derived from the applications of complexity theory to political science and international relations, in geopolitical analysis and forecasting, Europe lags far behind. This could be an opening for EEAS to gain competitive advantage over national foreign ministries. But it is an old story. More interesting is the role that digital tools, including but not just social media, in advancing core strategic objectives. Much of traditional diplomacy has consisted of using networks to construct, and disrupt, coalitions to promote policy objectives. In as far as this remains a core diplomatic function, online platforms and digital networking tools should be playing a key role in increasing its effectiveness and reach. This is all the more so given that these coalitions must now include a broad range of governmental and non-governmental actors, not all of whom can be reached face to face.

There are many possibilities to be explored. For example, the struggle against Islamic State in Syria and Iraq. In Iraq in particular Islamic State seems to be a coalition consisting of Sunni tribes, ex-Baathists and a core of Jihadists. The trick may be to break this coalition up, as Petraeus broke up a similar coalition based on Al Qaeda in 2007. However, I suspect few will be willing to drive round Western Iraq with suitcases full of cash for the Sunni tribal leaders, as in 2007. In any case, bribery may not be enough. There may need to be a genuine dialogue with both Sunni leaders and Baathists about what would persuade them to break with the jihadists (re-writing Sykes-Picot?). This may be easier, and safer, done online than face to face, certainly initially. There are a host of online tools and techniques that could be brought into play, including chatrooms and social media. Intelligence services use chatrooms to monitor and disrupt terrorist groups. They can also be used to promote diplomatic objectives.

Online platforms can also be developed. One can conceive of circumstances in which actors in a conflict are able to game out the possibilities of an international conflict or dispute on an internationally maintained platform before committing to a given policy option. This could become a major tool of international mediation. Indeed, as a generation of world leaders emerges who grew up online, they may naturally tend in this direction. More concretely, the Mont Fleur scenarios was a scenario building exercise in Apartheid South Africa in which participants from across the political divide came together to generate future scenarios for the country. The exercise generated a common language about future developments as well as shared assumptions about possible outcomes. It contributed to a peaceful transition. In the Mont Fleur scenarios the participants physically came together. But this may not always be possible, for security or political reasons. One could imagine creating online platforms that would allow scenario building across the Internet, whether to generate shared language and assumptions, if not solutions, in a civil conflict like Libya, or shared assumptions about the nature of the issues in a crisis like Mediterranean migrations. In both cases, such online exercises would offer the prospect of ideas, if not solutions, emerging in which the participants (as opposed to western officials) had real ownership.

My aim in this, already overlong, blog is not to offer specific digital diplomacy projects. No doubt the suggestions floated above have real problems. Rather I want to stress two points: that Digital Diplomacy, like Public Diplomacy, is just another tool in the service of broader diplomatic strategies, and not an end in itself; and secondly that Digital Diplomacy must get beyond its obsession with social media to explore a wider range of online tools and techniques.