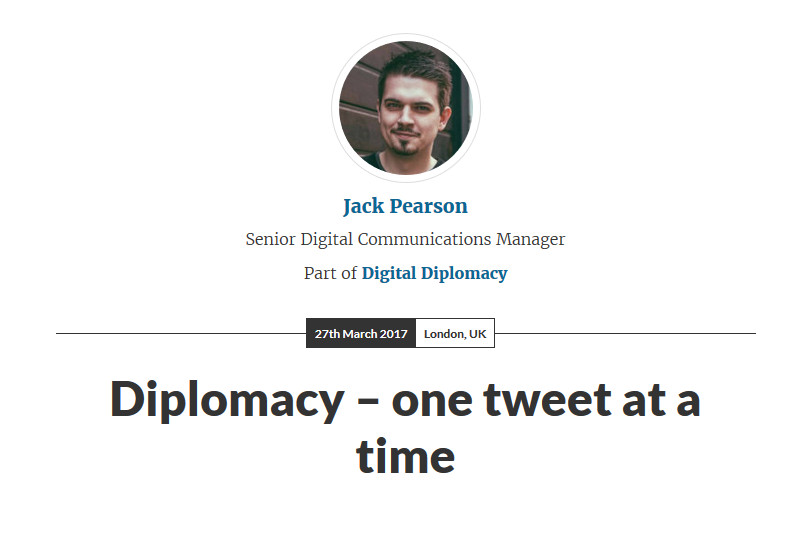 ‘Blog first appeared on The State of Digital Diplomacy 2016‘

“Diplomacy is the ability to tell someone to go to hell in such a way that they look forward to the trip (103 characters).” The famous quote by Churchill is not just pithy aside it’s also an almost perfectly tweetable line. It’s an interesting thought experiment to imagine what Churchill would be tweeting, if he were around today. We suspect he’d not only be a world class practitioner but also one of the biggest advocates of digital communications.

Today it’s absolutely central to the work of the Foreign and Commonwealth Office. It’s a key tool in our diplomatic arsenal and skilful digital communications is increasingly non-negotiable for modern diplomacy. Those who do it best will set the agenda and ultimately effect change.

Today our posts and ambassadors around the world are engaged in thousands of conversations each year. Our ministers regularly report from their trips across the globe and use social media to talk directly to people both in the UK and audiences abroad. The ferocious pace of change which social media and digital technology has driven means that many of the old rules increasingly don’t apply. Our expectations of how leaders should behave and communicate have dramatically shifted. Against this backdrop our ministers and ambassadors have embraced the huge opportunities that this presents.

Our Foreign Secretary Boris Johnson leads by example. He regularly records quick video clips to update his followers on his work, to comment on the issues of the day and to raise the profile of causes which the Foreign Office champions.

This year at the United Nations General Assembly he even recorded a live report on how conversations were going. Diplomacy and international relations are inherently complex, so plainspoken communications can be very effective in helping to explain our work and galvanise support for it.

Our ambassadors do excellent work around the world, engaging in debate and demystifying our work. Whilst diplomacy requires discretion, it also increasingly requires outspoken champions. It needs people to explain its value, to demonstrate how it works and above all to talk to the issues it looks to address. We need to mobilise public opinion and support, not only in the UK but also in countries around the world and digital communications can help us to do it. From human rights and democracy, to the rules of trade; we have arguments to make and our ambassadors are often at the front line of making them.

Against this backdrop of rapid change and full frontal digital engagement, it’s important to take stock. Looking back on 2016 and ahead to the rest of 2017, a few things have become clear:

More than ever before, context matters. We must make strategic interventions to capitalise on opportunities to change minds and turn debates. We need to talk to the issues which people care about and do it in a way which helps them to understand the world around them.

We have to show people and not just tell them. Updates and commentary are really important, but they only go so far. We need to take people behind the scenes and closer to the action to build credibility and authenticity. If we want to garner support, we need to be willing to more regularly show people what’s at stake.

We cannot lose our focus on what matters. In a world where more and more people are demanding our attention, we must stay focused. Building large follower numbers or online popularity is meaningless unless we use it to support our policy objectives. We need to keep a razor sharp focus on the outcomes we’re trying to achieve and stick at them.

At the Foreign Office, we’ll be continuing to strive for best practice, adapting ideas from any and every sector and looking for ways we can break norms and innovate. We’ll be focusing on developing our content strategy, in particular making more and better video. We’ll be looking at how we can deliver news quicker and tell stories in more depth. We’ll be trying to drill down into what really matters to people and working hard to make sure we’re helping to deliver real change in the world.

There’s a lot of discussion about ‘Digital Diplomacy’ as a theory and a concept, but it’s really quite simple: It’s about making the most of the digital tools at our disposal to talk to people, change minds and influence behaviours. As we look ahead to the rest of 2017, we’ll continue those conversations, providing information, engaging as many people as possible, listening to their views and making the case for our positions wherever we can.