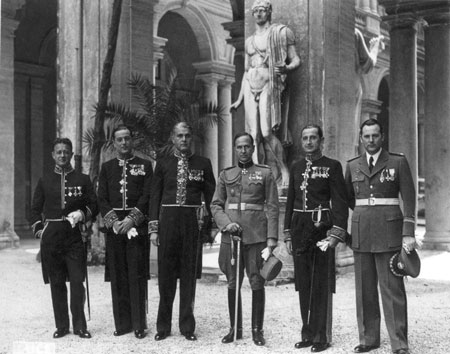 The history of diplomacy shows that special attention was given in the past to the ranks of diplomatic representatives. Irrespective of the kind of mission they were charged with the diplomats always sought to be accorded a higher rank that ensures the right of precedence on the occasion of the audience with the sovereign, at ceremonies and during other manifestations in the Receiving State.

In the course of the XVII, XVIII and XIX centuries, there were continuous arguments and conflicts with absurd and sometimes tragic consequences because of disputes about the rank that the diplomatic representatives claimed for themselves.

The diplomatic envoys coming from big and militarily strong states demanded a higher rank for themselves, considering that they were protecting the interests of their country in this way, and the prestige of the sovereign who appointed them to perform diplomatic functions.

The diplomats of France and Spain were the most persevering in skirmishes about the diplomatic rank. There is a number of anecdotes and jokes about the incidents among them in the attempt to resolve the problem. The conflicts ceased with the coming to power of the Bourbon dynasty in 1871, when France succeeded in gaining great Power status on the international scene, thus pushing Spain into the background.

Conflicts over the rank of diplomatic representatives are a matter of record also in our lands. At the Congress held in Sremski Karlovci in 1699, all the delegations attending the gathering, i.e. the delegations of Turkey, Austria, Poland and Venice, claimed the right to the highest rank. All of them demanded the right to be the first to enter into and to exit from the conference hall. Having in mind the fact that it was not possible for all the delegations to be accorded the highest rank, there was a risk that some participating delegations might leave the Congress. It was necessary to find a solution that would satisfy all. Opening four entrances to the conference room in which the sessions were held solved the problem; thus, the delegations entered the conference room at the same time.

In addition to the diplomats, the rulers-monarchs also claimed the right to a higher rank for their diplomats vis-a-vis the states with republican system of government.

Considering that “the problem of rank” had existed for a very long time, and that conflicts and controversies were impossible to avoid, it was essential to establish rules that would be binding upon all.

In order for the Rules to be enforced in practice and to be binding upon all, the plenipotentiaries of the signatory Powers of the Treaty of Vienna also addressed other sovereigns asking them to sign and apply the adopted document.

The Rules established three categories of diplomatic agents. The first category was comprised of ambassadors, legates and nuncios; the second – included ministers (heads of legations) and others; the third – charges d’ affaires.

The first category of diplomatic agents alone had a representative capacity, which implied contact with the sovereign, the title of Excellency and some other privileges that were accorded to all diplomatic representatives with the passage of time.

The rank was granted to diplomatic agents according to the date of notification.

The Vienna Rules, and the amendments thereof adopted in Achen, resolved centuries old disputes about the rank of the diplomatic agents and diplomatic etiquette.

The right to determine the category of the diplomatic agent was left to the states themselves.

But a new diplomatic problem was in sight. The great Powers were against the right of small countries to send ambassadors, that is, representatives of the first category. They considered that this right belongs exclusively to them. The problem was surmounted by the application of an unwritten rule to the effect that states should send to one another envoys of the same rank.

The wearing of diplomatic-consular uniforms was accepted by representatives of all countries with the exception of those of the United States of America. Namely, by a law adopted in 1867, the US prohibited the wearing of official outfits by its diplomatic-consular agents. A possibility was left though that, if the diplomatic etiquette of the Receiving State so requires, the diplomatic agents of the United States may wear evening suits, short coat (culotte courte), including gold buckles on their shoes.

The Ministry of Foreign Affairs of each country thereof determined the kind of diplomatic-consular uniform and the use.

Official Suits in Serbia and Montenegro in the XIX Century

All official clothes had something in common and that is that they retained traditional elements, but also followed trends in neighboring countries and Europe at large, from the choice of material to the minutest decorative details.

In Serbia in the XIX century the attendants employed in the diplomatic service at home, that is, in the Ministry of Foreign Affairs, and the diplomatic agents during their mission abroad, were obliged to wear official suits.

The obligation to wear diplomatic-consular uniforms is referred to also in the correspondence of Laza Kostić, during his preparations to assume the post of the secretary of the Serbian legation in Russia. In a letter addressed to Miša Dimitrijević, he asked that the latter should send the books that L. Kostić had left in Novi Sad, so he might sell them to the National Library because he was in need of money for equipping himself properly before joining the Foreign Service. “Please do your best to speed up the dispatch, otherwise I’ll be in great trouble. After the session of the Assembly (1880) I am supposed to leave for Russia and I’ll have many outlays which I will not be able to cover from what I am entitled to get from the state treasury. For example, I have to order a uniform, which is absurdly expensive; it will cost me 100 ducats. Without the uniform I will not be received in the Winter Palace, and I need to deputize for the Minister.”1

Diplomatic-Consular Suits in the Kingdom of Yugoslavia

The first preserved regulations related to the obligation of wearing official suits in the Ministry of Foreign Affairs, and of wearing uniforms in the diplomatic-consular missions abroad originate from 1931.

The Acting Minister of Foreign Affairs, Minister of Construction Works, etc., Kosta Kumanudi, Ph.D., signed “Rules Concerning the Obligation of Attendants in the Ministry of Foreign Affairs to Wear Official Suits”2 and the Rules Regulating the Making and Wearing of the Diplomatic-Consular Uniform.3

The Rules Relating to the Making and Wearing of Diplomatic-Consular Uniforms abroad provided for four types of uniform according to the category of diplomatic agents.

It was the obligation of the diplomatic-consular agents to acquire the uniform within the prescribed period of time: Royal Envoys were obliged to make sure that they get it before the presentation of the Letters of Credit, and not later than two months following the appointment; Counsellors and Consuls General, First Secretaries and Consuls, within six months; and other clerks within a year, counting from April 1, 1931.

The Protocol of the Ministry of Foreign Affairs was in charge of the application of the Rules Regarding the Making and Wearing of Diplomatic-Consular Uniforms.

According to recollections of some diplomatic-consular agents at the time, the uniforms were obligatory. Although the elements thereof were strictly prescribed in regard to quality, material, colour and craftsmanship, there were departures.

In order to avoid possible differences, in 1937, the Protocol of the Ministry of Foreign Affairs adopted the new Rules governing the making and wearing of diplomatic-consular uniforms4, including an annex with sketches for all parts of the uniform5 according to the categories indicated by the author, Milica Babić-Jovanović.

TAILCOAT: Made of dark blue wool material with one-row buttoning with 7 gold buttons having state coat of arms on them. Trains embroidered with decorative flower pattern of lily edged with gold ribbon.

COLLAR: Upright, made of dark red velvet, embroidered with pattern of palm branches and lily flower, edged with gold braid.

BREAST: Embroidered with upright palm branches and flower pattern of lily and edged with gold braid.

LOWER PART OF SLEEVE: Made of dark red velvet, embroidered with pattern of lily flower and palm branches, edged with gold braid.

SMALL PART OF THE BACK: Embroidery consisting of palm branches intertwined with pattern of lily flower.

POCKET FLAPS: Embroidery of horizontal palm branches and lily flowers (I and II category uniforms), with slantingly cut edges: the part right above the pocket formed of two semi-circles. Edged with gold braid from three sides.

TROUSERS: Made of dark blue wool material with double gold trimmings four centimeters wide. There was also a longer, dark red decorative part between the trimmings and the heel.

SWORD: Flat cutting edge, scabbard made of black leather; suspended on a gold embroidered piece of cloth up to one-fifth of the sword. Gold-plated hilt, the handle made of white mother-of-pearl with the crown on the top; state coat of arms on a plate at the bottom.

HAT: Black, two-pointed, made of silk felt. White ostrich feathers on top and tricolor state emblem; three gold braids on the right-hand side.

CAPE: Made of dark blue wool material with a dark blue velvet collar.

SHOES: High shoes made of patent leather, without trimmings.

Uniform of the II Category – Counselors and Consul Generals (1931)

TAILCOAT: Material, colour and style, the same as for the I Category. Trains edged with gold braid.

COLLAR: Embroidery consisting of palm branches intertwined with pattern of lily flowers. Embroidery covers two-thirds of the collar. The collar is edged with braid.

SMALL PART OF THE BACK: Embroidery of palm branches and lily flower pattern.

POCKET FLAPS: The same as for the uniform of the I Category.

TROUSERS: Wool material, the same colour as that of the tailcoat. Double trimmings three centimeters wide. There was also a longer, dark red decorative part between the trimmings and the heel.

HAT: Black, two-pointed, with black ostrich feathers on top; tricolor state emblem and two gold braids on the right-hand side.

SWORD: The same as for the uniform of the I Category, with a string without embroidery.

The cape gloves and shoes the same as for the I Category.

Uniform of the III Category – First Secretaries and Consuls (1931)

TAILCOAT: No embroidery on the breast or on pocket flaps.

Trousers, hat, sword, cape, gloves and shoes the same as for the uniform of the II Category

Uniform of the IV Category – Secretaries, Vice-Consuls and Clerks (1931)

TAILCOAT: No embroidery on the breast or on pocket flaps.

LOWER PART OF SLEEVES: Embroidery consisting of a small palm branch with lily flower pattern in the corner.

SMALL PART OF THE BACK: Embroidery consisting of a small palm branch and lily flower pattern in the corner.

BREAST AND TRAINS: Edged with gold braid only.

Trousers, hat, sword, cape, gloves and shoes, the same as for the uniform of the II Category.

3Službene novine Kraljevine Jugoslavije (The Official Journal of the Kingdom of Yugoslavia), No. 64 – XIX, Belgrade, 1931.

The images below are taken over from the book entitled “Official Suits in Serbia in the 19th and 20th Century”, published by the Historical Museum of Serbia and the Gallery of the Serbian Academy of Science and Arts, 2001

The Day of Serbian Diplomacy was celebrated