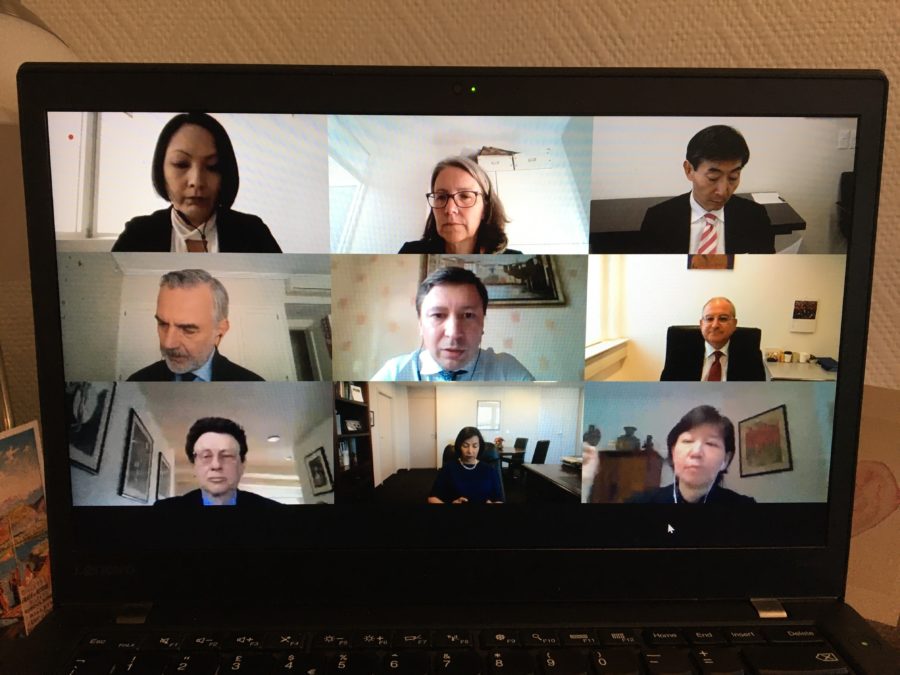 I last blogged in late February on the P5 Conference in London, looking ahead to the Non-Proliferation Treaty (NPT) Review Conference in April. The coronavirus outbreak in China was on our minds, of course, but none of us knew then how it would affect the rest of the world. Switzerland reported its first death from the disease on 5 March. The World Health Organisation (WHO) declared a pandemic on 11 March, and Switzerland imposed a lockdown a couple of days later.

The human toll from the disease has been horrific. The economic, social and political implications will be immense, though it will take some time to understand them fully. My colleagues here dealing with the WHO, the humanitarian agencies, and the economic and human rights aspects of the crisis have been at the front line, and I’m full of admiration for the work they’ve been doing to coordinate the global response.

The ban on meetings of more than five people, and the restrictions on international travel, stopped much of multilateral disarmament diplomacy in its tracks. The Conference on Disarmament hasn’t met since 10 March, for the whole of the Australian Presidency. A whole slew of meetings, formal and informal, were cancelled, including the Arms Trade Treaty (ATT) working groups, the Annecy NPT workshop and the UNIDIR Space Security Conference.

Most significant of all, as the disease took hold in New York it became clear that, important as it was, there was no way the NPT Review Conference could take place as scheduled. We spent the first few weeks of the lockdown supporting the President-designate and his team in unravelling the arrangements and taking the unprecedented decision to postpone the meeting.

Some of our work has been able to continue: the small committees overseeing intersessional work on land mines and cluster munitions and administering the ATT voluntary trust fund simply shifted their meetings online. But work on some of the most important issues has been effectively on hold: a combination of practical, technical and procedural reasons make it impossible to have the set-piece formal meetings online.

Even though the situation is still very serious in some parts of the world, Geneva has largely emerged from the lockdown. Arrangements are in hand to allow in-person meetings to resume in the Palais shortly, albeit in ‘hybrid’ form, with most delegates joining via online conferencing platforms. The Conference on Disarmament and the Cluster Munitions Convention should be able to hold hybrid meetings in June, whereas the Anti-Personnel Mine Ban Convention will hold its intersessional meetings entirely online. (The Convention on Certain Conventional Weapons has postponed its meetings until September, though). The August meetings of capitals-based experts on biological weapons and lethal autonomous weapons systems present different challenges, though, given ongoing travel restrictions.

The pandemic will have some important implications for the substance of the various conventions too – most particularly for the Biological Weapons Convention. I’ll go into some of these issues in more detail in further posts. For now, we’re all feeling our way back into this new normal, and trying to work out how to move ahead.