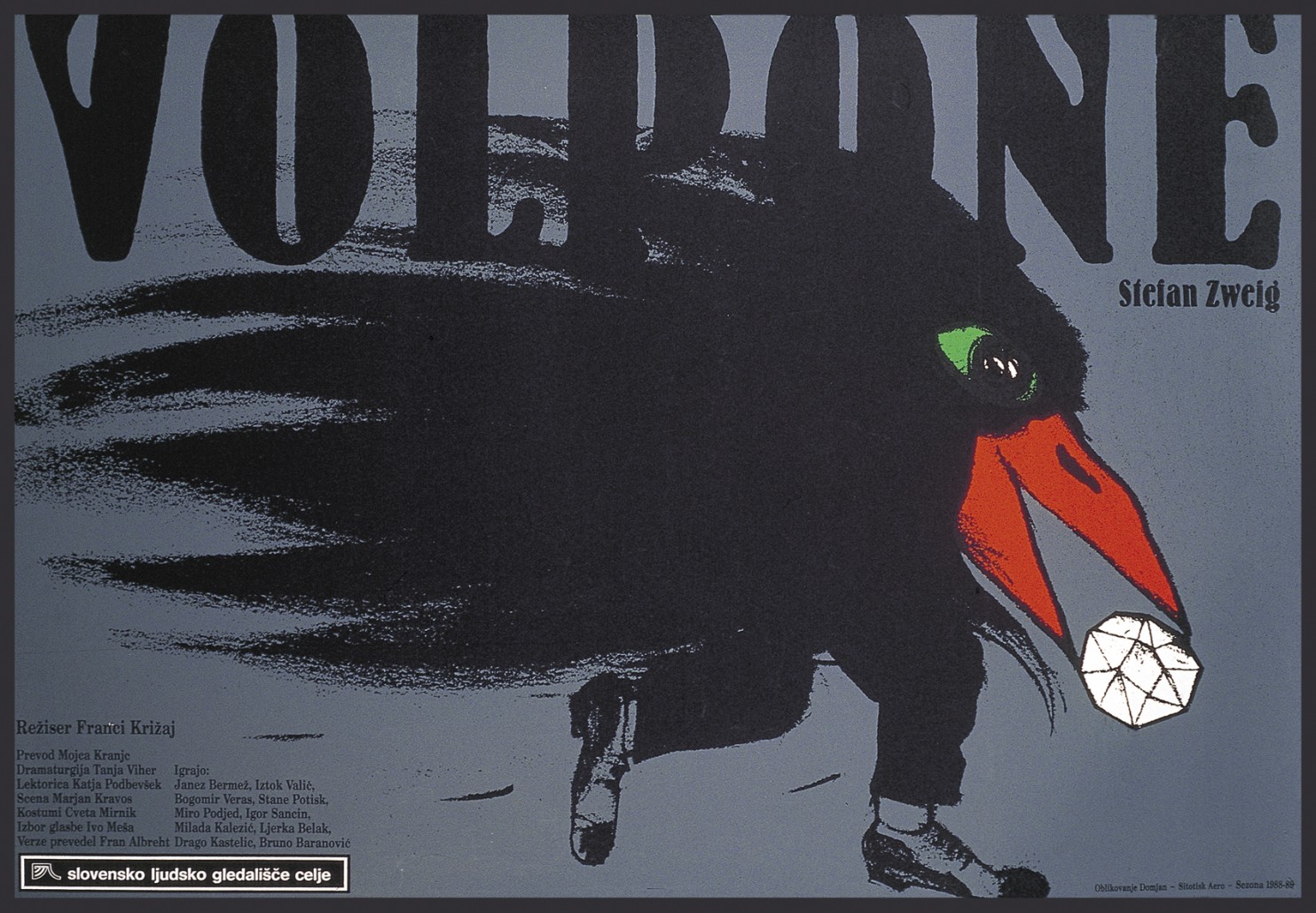 Twitter. Facebook. E-mail blasts. Such phenomena may be a boon to Information Age theaters seeking publicity. But will cyber-marketing ever attain the level of high art, as a much older marketing medium — the theater poster — has frequently done? The list of artistic luminaries who have designed posters for stage performances includes Alexander Calder, Alphonse Mucha and Pablo Picasso, to name a few.

The Republic of Slovenia has its own theater-poster superstar: Joze Domjan, whose career stretches back more than four decades. A graphic designer and artist trained in Vienna and Ljubljana, Slovenia, Domjan has turned his hand to calendars, books, memorial installations — even stamps. But he is particularly known for his theater posters, many of them created for Slovensko Ljudsko Gledalisce Celje — the name can be translated as Celje People’s Theatre — a repertory company in the town of Celje, where he was born.

An exhibit of Domjan’s work, “Oko.Misel.Roka.” (“Eye.
Thought.Hand.”) is at the Embassy of the Republic of Slovenia, where it remains through Dec. 12. A version of a showcase that appeared at Novo Celje Mansion in Zalec, Slovenia, the exhibit gives an overview of the artist’s work from 1973 through 2013.

Eye-catching images abound. There’s the poster for Sophocles’s “Antigone” featuring a hand with blood-red nails probing a jagged dark mass that could be a crown. There’s an unsettling bird-man hybrid on a placard for an adaptation of “Volpone.” There’s the grim black-and-gray landscape, anchored by a buried white bone, that alludes to “Halstat,” a play by Slovenian writer Drago Jancar.

And there’s the mysterious and haunting image that may be Domjan’s most famous creation: a cloaked figure in a Venetian carnival mask and black tricorne hat, looming against a midnight blue background in a poster for a 1995 production of “The Merchant of Venice” (“Beneski trgovec” in Slovene).

“I don’t know why it has been so popular,” the 62-year-old Domjan said of the “Merchant of Venice” poster. Speaking via Skype from his home in Liboje, Slovenia (with Slovenian Embassy cultural, press and public diplomacy officer Nuska Zakrajsek translating), the artist speculated that the appeal might be “the powerful blue color” in the poster’s background. Alternatively, he said, the draw might be the delicate black-on-black lace of the cloak, or perhaps the mask. Whatever the attraction, the image has been so popular that Domjan isn’t sure he owns a replica of the poster himself: Too many other people walked off with the copies that originally were printed.

Domjan said he prefers another of his posters on view in the embassy exhibit: an advertisement for a production of Russian writer Alexander Galin’s “Stars in the Morning Sky.” Set at the time of the 1980 Moscow Olympics, Galin’s play depicts image-conscious Soviet authorities banishing the city’s prostitutes, who they sequester outside of town. To capture the spirit of the production, part of Celje People’s Theatre’s 1990-91 season, Domjan took part of the 1980 Olympics logo — rising stripes that resemble a streamlined tower, with a five-pointed star above the summit — and added, around the star, a symbol that, at least in Slovenian vernacular culture, could allude to female genitalia.

This design was potentially controversial, since it could be read as an obscenity lobbed at communism. The Berlin Wall had recently fallen; the dissolution of what had been Yugoslavia was at hand (Slovenia established independence in 1991). Because of the political circumstances, “everything was very sensitive,” Domjan recalls. He said he sat with Franci Krizaj, the production’s director, for at least two hours, equivocating over whether to print the poster, or whether to go with a safer, more figurative design.

Finally, edgy symbolism won the day. It “seemed more to the point,” Domjan said. No major repercussions followed, but when the international design publication Graphis wanted to publish the poster, he was obliged to provide a caption explaining that the risque imagery was not a political statement, but rather referred to the play’s prostitution theme.

Domjan dealt more directly with geopolitical history and conflict when he began to design, or collaborate on, memorial installations and exhibits. He has vivid memories of working on a commemorative installation related to retaliatory killings in post-World War II Yugoslavia: The assignment, which forced him to contemplate grim testimonial objects such as a shoe with human bones in it, made a deep impression on him. “It was almost painful,” he said.

Fortunately, not all his commemorative-display gigs have been so somber. One exhibit dealt with the history of skiing, he said.

Domjan still is designing, although he also keeps himself occupied with the vineyard and orchard attached to his current home. Looking back at his life’s work, particularly in theater-poster design, he notes that he has been fortunate to work with directors and other colleagues who gave “ample scope to new ideas — even radical ideas.” All in all, he said, he feels “very lucky and privileged.”

Wren is a freelance writer.

Oko.Misel.Roka. (Eye.Thought.Hand.) On view Monday-Friday, 9 a.m.-5 p.m. through Dec. 12 at the Embassy of the Republic of Slovenia, 2410 California St. Visit www.
washington.embassy.si.