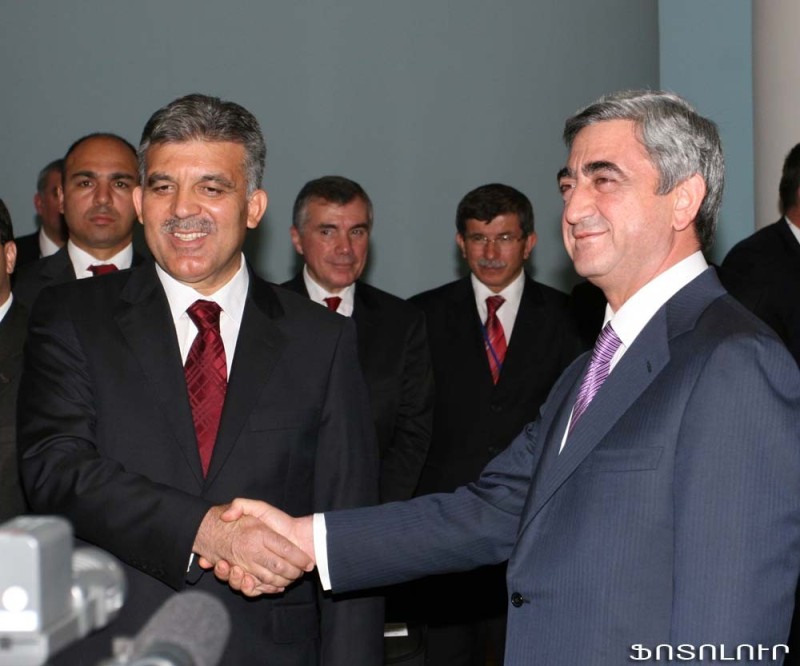 On September 6, 2008 an unprecedented event took place in the history of Armenia and Turkey – Turkish President Abdullah Gul arrived in Armenia. This very visit was a startup point for the “football diplomacy” process. Six years have passed and the Armenian-Turkish relations are at quite another point now and the expectations of new developments are linked to a new invitation (RA President Serzh Sargsyan has invited Turkish President Erdoghan to visit Armenia on April 24, 2015).

As one may remember what is called “football diplomacy” kicked off on June 25, 2008 in Moscow, when, at the meeting with the Armenian community of Russia, President Serhz Sargsyan stated about his intention to settle the Armenian-Turkish relations, soon after which he invited Turkish President Abdullah Gul to Yerevan watch the Armenia-Turkey football match. This is the reason for the above mentioned process is called “football diplomacy”.

Though the Armenian team lost 2:0 in the match, however, the political process went on. On April 22, 2009 it was declared about the “Road map” of Armenian-Turkish rapprochement, which was soon followed by concluding and signing protocols on the “Settlement of diplomatic relations” and “Development of bilateral relations”.

On February, 2010 the protocols were sent to the National assembly after which Turkey’s attempts linking the signing of protocols with Nagorno Karabakh conflict.

On April 22, 2010 Armenia decided to suspend the ratification process. A year later, the same happened in Turkish parliament, thus cancelling the process as a whole. As some experts would say the “Football diplomacy” brought the Armenian-Turkish relations to a dead-end, still the other part of them assures that this was a good chance for Armenia to show its readiness in the settlement of the relations with Turkey, as well as a proof of the fact that Turkey supported the approach of making preconditions.