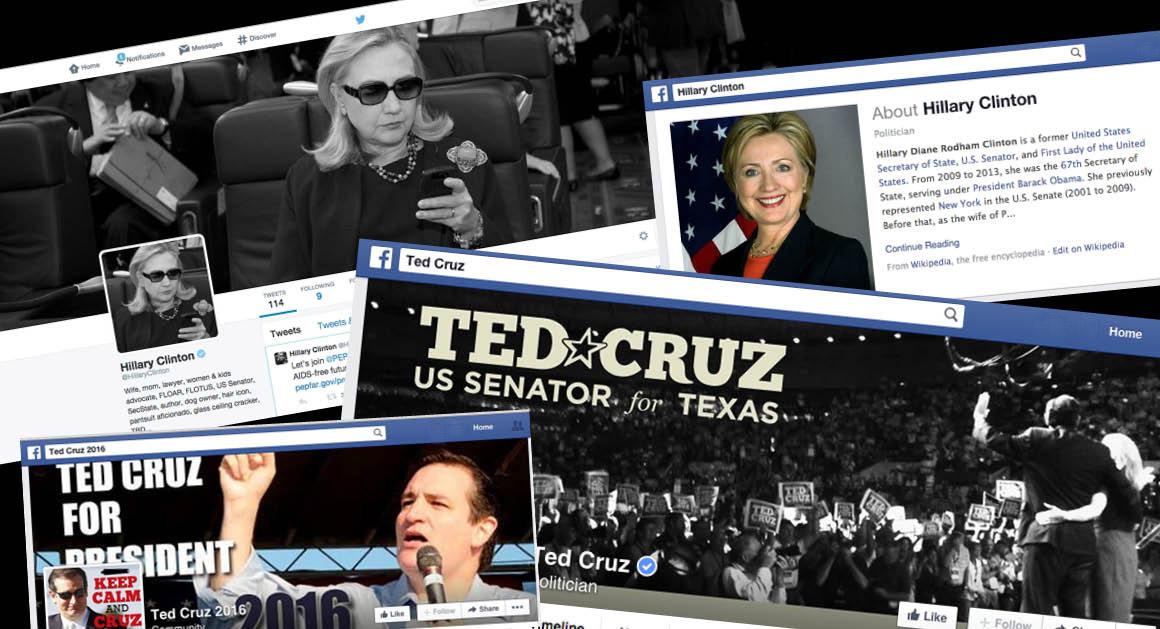 Social media has no doubt who the most buzzworthy potential presidential candidates are at the moment for 2016: Hillary Clinton and Ted Cruz together accounted for 40 percent of the discussion on Facebook and nearly half — 47 percent — of mentions on Twitter among 10 top presidential possibilities in the past three months, according to new data provided to POLITICO by Facebook and Twitter.

Meanwhile, Jeb Bush’s big name didn’t spark much chatter at all. He garnered only 3 percent of the Facebook mentions and 2 percent of tweets, fewer than nine other would-be contenders.

The mentions cut both ways, including negative comments as well as positive ones. But they reflect the extent to which Clinton, a long-standing subject of debate, and Cruz, who casts himself as a conservative renegade, have dominated the conversation at a time when others are trying to gin up some grass-roots energy.

“Imperfect as it is, [Facebook] is probably the biggest trove of data of what actual human beings outside of Washington, D.C., are talking about day to day and that makes it intrinsically important, and these platforms are actually important for reaching people and motivating them,” said Teddy Goff, partner at Precision Strategies and former digital director for Obama’s reelection campaign.

“Anything that gives indication as to who’s sort of breaking through and seems to be of interest and topical among the gigantic sampling of Americans is important,” he added. “To the extent it’s correlated to who is going to have the ability to mobilize people, that’s going to have actual outcomes.”

Barack Obama proved in both his presidential campaigns that social media can be a major component of an effective grass-roots campaign. And heading into 2016, some campaign data experts believe social media will be an even more powerful tool than traditional media as a way to get a message out to millions, mobilize activists and target swing voters.

Of the 27 million Facebook posts, comments and content likes related to the potential White House candidates between Aug. 22 and Nov. 22, Clinton and Cruz each were mentioned in 20 percent of the posts, according to Facebook’s data scientists. Clinton topped Cruz though in the number of people talking about her with 2.3 million people making 5.6 million interactions, while Cruz had 1.8 million users referencing him in 5.6 million interactions. (POLITICO provided the list of contenders to Facebook and Twitter.)

Some 185 million Americans are on Facebook, and nearly half of adults who use the site say they read political stories in the past week, according to a recent Pew report. Far fewer people use Twitter on a regular basis — Twitter estimates 65 million monthly active users in the United States — and only 9 percent say they use it to find political news, according to the same Pew report.

Nickie Titus, the digital director for the Ready for Hillary campaign, said the group has been using its social media presence to mobilize Clinton supporters in the absence of any official campaign.

“What matters is [Clinton is] part of the discourse. [It’s] about having conversations and amplifying a message,” said Titus. “One of the things that’s really great, particularly on Twitter, is a way to amplify the message, then people can keep spreading it which you see with her hashtag or when people are retweeting her handle. It’s helping her spread her word.”

Following Cruz and Clinton on Facebook are Wisconsin Gov. Scott Walker and Texas Gov. Rick Perry, each tied for 11 percent of the conversation, or 2.9 million interactions. Perry had 1.1 million people talking about him, while Walker had 1 million. Sens. Rand Paul (R-Ky.) and Elizabeth Warren (D-Mass.) follow with 8 percent for 2.1 million interactions each, though Warren beats out Paul with 900,000 people talking about her, compared with 800,000 people for Paul.

“These numbers are important because they help determine reach,” said Vincent Harris, who until last month helped with Cruz’s digital strategy before taking up the role of chief digital strategist for Paul’s RANDPAC. “Because of how Facebook’s algorithm works, engagement equals reach, so people who are not asking for engagement and aren’t focused on engagement are not getting the reach they need to.”

Josh Perry, who has been Cruz’s digital director since he took office, said in a statement they focus on engagement to boost their visibility.

“Our main strategy is to be as engaging with our content as possible, whether that’s by thinking of ways to generate comments, likes, or shares – this all helps boost the appearance of our posts in people’s timelines,” Perry said. “Of course, that all begins with having a clear and direct message about something people care about, whether it is about the economy, national security, healthcare or any other issue.”

On Twitter, mentions were counted for the politician’s full name and official Twitter handles. Paul came in third with 12 percent of total mentions, or 1.9 million mentions, while Christie followed with 11 percent, or 1.81 million. Rubio fared far better on Twitter than on Facebook with 9 percent, or 1.37 million, mentions. Perry had 7 percent of the mentions on Twitter, or 1.06 million, while Walker, Warren and Sanders each held about 4 percent of the mentions, at 715,000, 690,000 and 630,000, respectively. And similar to his placement on Facebook, Bush came in last with just 2 percent of mentions, or 310,000. For the full list of mentions and search criteria on Twitter, click here.

But the high numbers on social media don’t necessarily correlate to a candidate’s standing in the polls — a recent CNN poll showed that among Democrats, Clinton tops the list for president versus an eighth-place finish for Cruz among Republicans.

“Looking at mentions is a topline number,” said Joe Rospars, founder and CEO of Blue State Digital and Obama’s former chief digital strategist. “Are people sharing mainstream press stuff, are people saying things on their own, and then, are people sharing the actual content produced by that person — which I would argue is probably the better of those three. Ultimately, it’s about the reach of what the candidate or organization or in this case PACs or Senate offices are trying to accomplish.”

Clinton’s name skyrocketed on Facebook three times in the past three months. The first came about the time of her appearance at Sen. Tom Harkin’s steak fry in Iowa on Sept. 14. Clinton’s mentions also jumped around Oct. 26, when she tried to walk back an earlier comment, “Don’t let anybody tell you that, you know, it’s corporations and businesses that create jobs.” Her third and biggest spike came around Election Day.

Cruz experienced two significant bumps in the past three months on Facebook. The first was on Sept. 10, when he was booed off stage after making pro-Israel remarks at a Middle Eastern Christian conference. The second and largest was on Nov. 10, when Cruz called net neutrality “Obamacare for the Internet.”

A spokesperson for Clinton did not respond to requests for comment, though Titus said Clinton’s high numbers despite the lack of an official page proves the power of her presence.

“She’s Hillary Clinton, you know? I think that the interesting thing about Facebook and Twitter is you don’t have to have an official presence. It’s an opportunity for people to talk with their networks about what they care about and that’s everything from the picture of your friend’s baby to Hillary Clinton and what she’s saying about equal pay or Jeanne Shaheen. It’s great, right? It’s the modern-day kitchen table in some ways,” Titus said.

Cruz’s digital operation has put an emphasis on outreach and engagement with the user, especially through entertainment, Harris said.

“I believe in persuasion by entertainment and I believe at the end, it’s when people go in and they want to be entertained and what they want is to have interesting and unique content given to them. That’s something I’ve been proud to work on with Sen. Cruz’s team, that’s what they’ve been doing for past 3½ years,” Harris said.

“[Cruz] is someone who has an ability to stir up and motivate and mobilize a certain fringe community within American politics,” Goff said. “It doesn’t surprise me that someone who has thrown red meat to an audience who feels very passionately about what they feel will see a lot more chatter … Cruz has a particular ability to irritate a broad swath of American people.”

Unlike Clinton, Cruz has a robust Facebook presence, boasting more than 1 million likes on just one of his two Facebook pages. His most popular recent post was on Nov. 20, criticizing Obama’s executive action on immigration. The post, which directs readers to a website called stopobamasamnesty.com (and subsequently asks for your name, email and ZIP code), had 79,694 likes, 16,576 shares and 12,610 comments by the first week of December.

On Twitter, where she has an official account, Clinton boasts more than 2.48 million followers. Cruz has more than 697,000 followers between his two Twitter accounts @SenTedCruz and @TedCruz.

The data provided to POLITICO by Facebook also included topics discussed related to each contender. For Clinton, the No. 1 topic of conversation was what Facebook termed Government Ethics, mostly about Benghazi, followed by Foreign Policy, Jobs and the Economy, Money in Politics and Economic Equality and Mobility.

For Cruz, the most discussed topic was Foreign Policy, followed by Jobs and the Economy, Health Care, Public Safety (mostly Ebola-related) and Immigration.

“It’s striking the extent to which these topics largely reflect the broader media narrative and messaging by these candidates — for instance, Elizabeth Warren and income inequality, or Jeb Bush and education,” said Patrick Ruffini, partner and co-founder at Echelon Insights, a Republican research and analytics firm.

“That tells me there’s something real in these numbers,” he added. “And if people are talking about the candidates in relation to something that’s not yet part of the media narrative, then that might be an early warning that something is up, and to monitor and respond accordingly.”

This type of digital data is widely expected to become an even larger part of the 2016 campaign than in previous cycles. BuzzFeed’s editor-in-chief Ben Smith in November went so far as to say that “Facebook is on the cusp — and I suspect 2016 will be the year this becomes clear — of replacing television advertising as the place where American elections are fought and won.”

Ruffini agreed that the 2016 election will very likely see the digital mediums converge with traditional methods.

“Different research tools are good at different things. Polling is good at asking a series of structured questions, and social media analysis is better at understanding emerging topics and what people find important, in their own words,” he said. “In 2016, I expect to see these two disciplines coming together.”