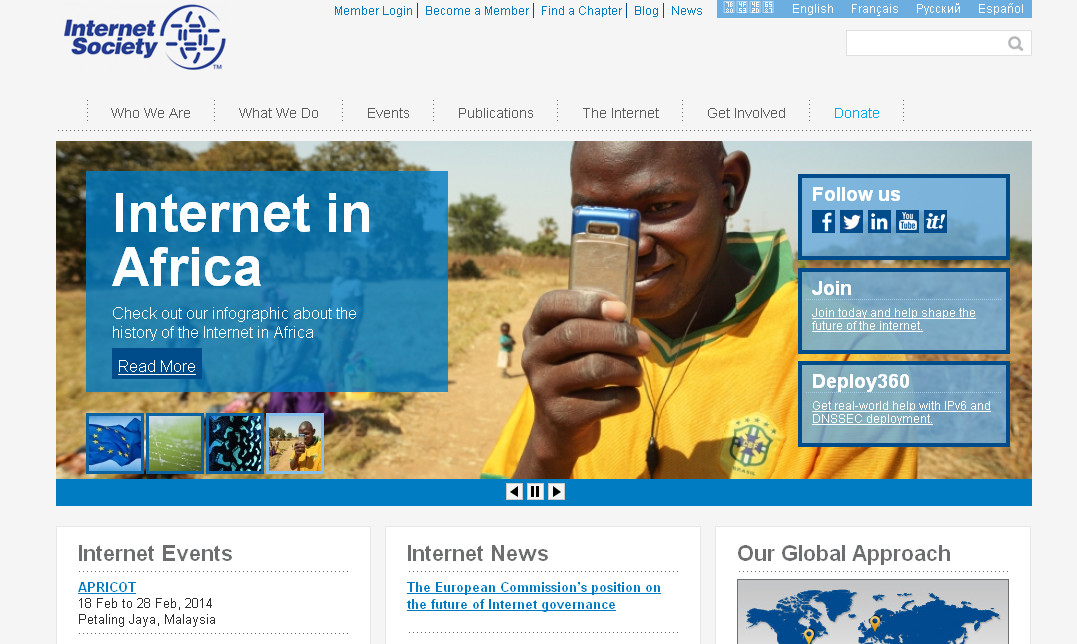 [Washington, D.C. and Geneva, Switzerland – 19 December 2013] – The Internet Society announced today the appointment of Kathryn C. Brown as its new Chief Executive Officer effective 1 January 2014. Ms. Brown brings more than 30 years of experience to her new role having most recently served as a Senior Advisor at Albright Stonebridge Group, an international consulting firm, and as Senior Vice President, Public Policy and Corporate Responsibility at Verizon.

“The search for a new CEO was both global and comprehensive, and we met with talented people from around the globe representing leaders from our broad Internet community and across a number of industries,” said Bob Hinden, Chair of the Internet Society Board of Trustees. “We are very pleased that Kathy has agreed to take the helm in driving forward the mission and vision of this organization.  Kathy is a proven leader with in-depth knowledge of global Internet governance policy and has a keen understanding of the many stakeholders debating the future of the Internet.”

“As the Internet Society engages with the community concerning today’s hot-button issues of privacy, security, and governance, the principles on which ISOC was founded remain as powerful today as they were 20 years ago,” said Ms. Brown. “The Internet Society is a powerful voice in the Internet community speaking out for an open, accessible, and trusted Internet around the globe. In this time of change, as the Internet has matured into a worldwide mode of human interaction, community, and commerce, new opportunities and challenges have inevitably emerged. The Internet Society is well positioned with the people, assets, and energy to engage change. I am extremely excited about the opportunity to lead this extraordinary organization forward.”

Kathy is a veteran of Internet policy development and corporate responsibility initiatives that have aided in the Internet’s global expansion. At Verizon, she helped identify and navigate emerging digital issues and led its global corporate responsibility initiatives. In her policy role, she led the company’s international public policy engagement through a period of dynamic change.  She represented the company in the successful adoption by the OECD of principles for Internet policy making and was a member of the U.S. delegation to the ITU World Conference on International Telecommunications treaty negotiations.

As leader of Verizon’s corporate responsibility initiatives, she served on Verizon’s corporate councils for the development of the company’s online privacy and content policies and promoted Verizon’s Human Rights Statement and Supplier Code of Conduct. Additionally, she oversaw an investment of more than $60 million a year in programs and grants from the Verizon Foundation that helped support Internet development.  In 2010 she partnered with the Internet Society to launch a highly successful forum on the Internet and higher education in East Africa. Kathy joined Verizon from Washington D.C. law firm Wilmer, Cutler Pickering, where she was a partner specializing in legal and regulatory communications policy.

Earlier in her career, Kathy served in U.S. President Clinton’s Administration where she was deeply involved in policy development that was instrumental to the deployment and adoption of the global Internet.  She served as Head of the Office of Policy and Development at the National Telecommunications Information Administration and then as Chief of Staff to Federal Communications Commission Chairman William E. Kennard.  At the FCC, she managed the staff supporting Chairman Kennard’s historic decision to keep the Internet unregulated, to fund the E-rate, and to increase radio spectrum availability to fuel wireless technology innovation. Before moving to Washington D.C., Kathy held senior roles for 15 years in government service in New York.

Based in the organization’s Reston, Virginia office, Brown succeeds outgoing CEO Lynn St. Amour, who announced in February 2013 that she would be stepping down at the conclusion of her contract.

“There has been a tremendous amount of growth and change since I joined the organization in 1998.  With the unyielding dedication and passion of the truly world-class staff, Chapters, and members, as well as an extremely supportive Board, we have been able to secure the Internet Society’s role as a global leader on Internet policy, technical, economic and social matters,” said Ms. St. Amour. “The future is bright for both the Internet and the Internet Society, and I am confident Kathy will lead the organization to new heights.”

About the Internet Society

Read the press release in: