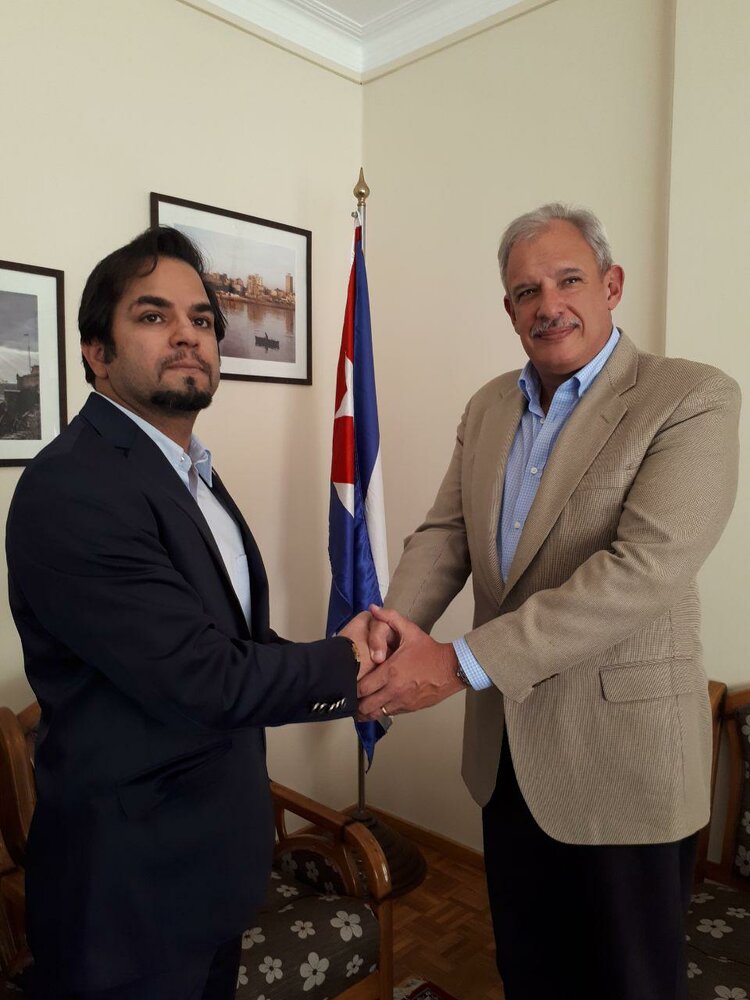 TEHRAN – The Iran-Cuba Friendship Association is determined to make every effort to boost the cultural ties between the people of Iran and Cuba, says Hadi Khansari, president of the association.In an interview with the Tehran Times, Khansari voiced his admiration for Cuba and its people, explaining what the Iran-Cuba Friendship Association stands for and what activities it is involved in.According to Khansari, the association was founded in 1381 (2002) by Naser Taqvaee, Farrokh Tamimi, M. Azad and Shams Al Ahamd, but its activities got serious only after he himself got involved in it in 1382 (2003).“As you know, friendship groups receive their permits as NGOs from the Interior Ministry.

They work under the public diplomacy [JB emphasis] department of the Foreign Ministry and they must be confirmed by security and intelligence services,” he explained.“Soon after I jointed the Iran-Cuba Friendship Association, the association held the first Chamran-Che Guevara commemoration in 1382,” he said, adding, “We repeated the event in 1384 (2005).”Asked about the events held by the association since then, Khansari responded, “Tens of press conferences have been held for the Cuban ambassador and other Cuban authorities who have visited Iran. We have held a photography exhibition in the Cultural Center of Nations as well as tens of exhibitions on handicrafts and paintings in the Milad Tower, Niavaran Complex, Sa’dabad Complex, Ab-o-Atash Park, and exhibitions in other cities including Gorgan, Dezful, Qazvin, etc.”“Nowadays,” he continued, “we hold events that are in line with expansion of friendly ties between Iran and Cuba, especially in cultural domains which are what we specialize in.”“We recently held an event to commemorate Jose Marti, a Cuban poet, revolutionary and journalist, who is considered a national hero,” said Khansari, who is a poet himself.He went on to say that the association have published books on Che Guevara and Cuba, and that it has some books by Jose Marti and other Cuban poets under translation.He also pointed out that he and his colleagues have published articles about Iran and Cuba in different media outlets.Khansari pointed to the association’s achievements, namely receiving Cuba’s highest diploma of peace from the Cuban Institute of Friendship with the Peoples (ICAP).

“We are among few associations which have been invited several times to the national TV and radio,” he added.Khansari said his association has actively participated in the events that the Iranian Interior Ministry, Foreign Ministry and its public diplomacy department have held on Cuba.“We have also travelled to Cuba several times. We held the Cultural Week in 2011 in Asia Culture House in Cuba and attended cultural festivals on literature and other subjects.”Making a reference to the United States’ sanctions on Cuba, he said, “As you know, Cuba has been under 60 years of severe U.S. sanctions, which have created many problems for the country.”In recent years, world countries in the United Nations have voted against the sanctions but the U.S. does not lift sanctions, he lamented.“We recently wrote two separate letters to the United Nations and the ICAP in support of lifting sanctions,” Khansari added.He pointed out that the association had held different events to support the five Cubans who were arrested and sentenced in the United States before they were released.Asked about Café Collection, a special cultural center which he recently founded in the city of Karaj, near Tehran, Khansari said Café Collection is a mixture of café, collection, museum and gallery.

“It has a photo gallery with 200 photos embedded in its ceiling, showing all aspects of life in Cuba, such as politics, economy, industry, technology, music, handicrafts, food, sports, primary and higher education, athletes, old cars, beaches, etc.”He added, “We have a specialized section on coffee which is very interesting, a section on handicrafts, and specialized sections on Cuban cigars, tobacco, pipe and musical instruments.”Original Article