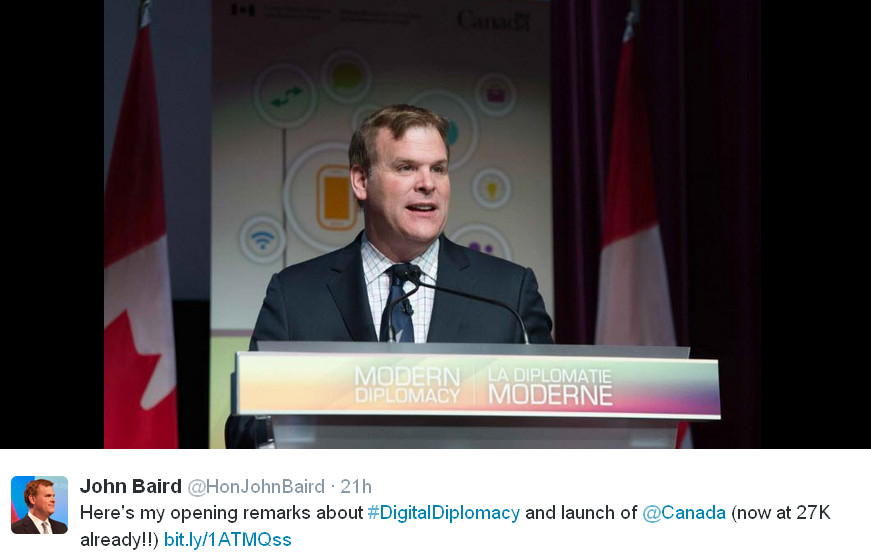 It’s exciting to see so many people get together here at DFATD [Foreign Affairs, Trade and Development Canada] to discuss digital diplomacy.

At this point, I’d normally take some time to compliment my friend Carl Bildt, but I fear he’s getting fed up with hearing my voice.

Over the last two days we’ve hosted a summit of the Global Commission on Internet Governance here in Ottawa, which he chairs.

During that summit we were dealing with the broad, long-term, fundamental issues of how the Internet is governed around the world.

How can we leverage digital tools for diplomacy?

In the spirit of engagement that social media embodies, I’ll keep my remarks very short so we can go straight to some Q & A.

“Sweden is—as you know—one of the leading countries in the field of telecommunications.

And it is only appropriate that it should be among the first to also use the Internet for political communications around the globe.”

Do those words sound familiar, Carl?

These last words were actually a quote from you 20 years ago.

And they came from an email exchange with President Clinton in 1994 —surely the first example of digital diplomacy.

In the 20 years since then, as we’ve all seen, digital tools have completely revolutionized the way we communicate.

Email, then the Web, then social media and now mobile.

When I spoke on this theme here in March, I mentioned that the first email I ever sent was in this department as a young assistant.

I didn’t understand the point of it back then.

Although, in my defence, I don’t think many people realized the full potential for how this technology would shape society.

Anyone willing to bet on what will happen in the next 20 years is a braver person than me.

Since last year, I’ve increasingly come to appreciate, and even rely on, social media and use it more and more.

You don’t need to be an expert at something to know that it’s important—and I’m very far from being an expert.

To anyone here who is thinking about dipping your toe in the water, I would recommend starting by just following others (or lurking, as some call it) and then take it from there.

This is something that is relevant to all ages, all regions and virtually all areas of our work.

We talk of digital “diplomacy,” but, of course, in this amalgamated department, that involves trade promotion, development initiatives and consular advice.

It cuts across disciplines too.

Establishing digital platforms has to go hand in hand with producing compelling content for those platforms.

And doing that well involves policy specialists just as much as press officers.

I think we’ve been very candid about the journey we’ve been on in this as a department.

And I have to say I’m proud of how much has been achieved this year.

The annual “Twiplomacy” report recently noted that “not a week goes by without a new Canadian embassy setting up shop on Twitter.”

Over 290 new social media accounts have been created since January, for both missions abroad and departmental initiatives.

That brings our digital footprint to over 100 missions around the world.

Anyone who works in the world of government will admit that managing rapid change isn’t one of its natural fortes.

So I pay tribute to the communications team here for making it happen.

All that said, we are always looking for ideas on how to develop this further.

That’s why I visited Twitter and Google in California at the start of the year, and I am planning to visit Facebook before the end of the year.

That’s why you’re all here today to discuss best practices and next steps.

And that’s why I’m delighted to announce today that we are launching‎ @Canada on Twitter.

This account will aim to capture the interest of audiences beyond our borders by acting as a shop window for everything that makes Canada the best country in the world.

It is one more tool in our diplomatic toolkit as we promote Canada as a nation of strong values, rich culture, beautiful landscapes and a dynamic economy.

And I look forward to hearing today what else we can add to that toolkit.

Thank you very much.