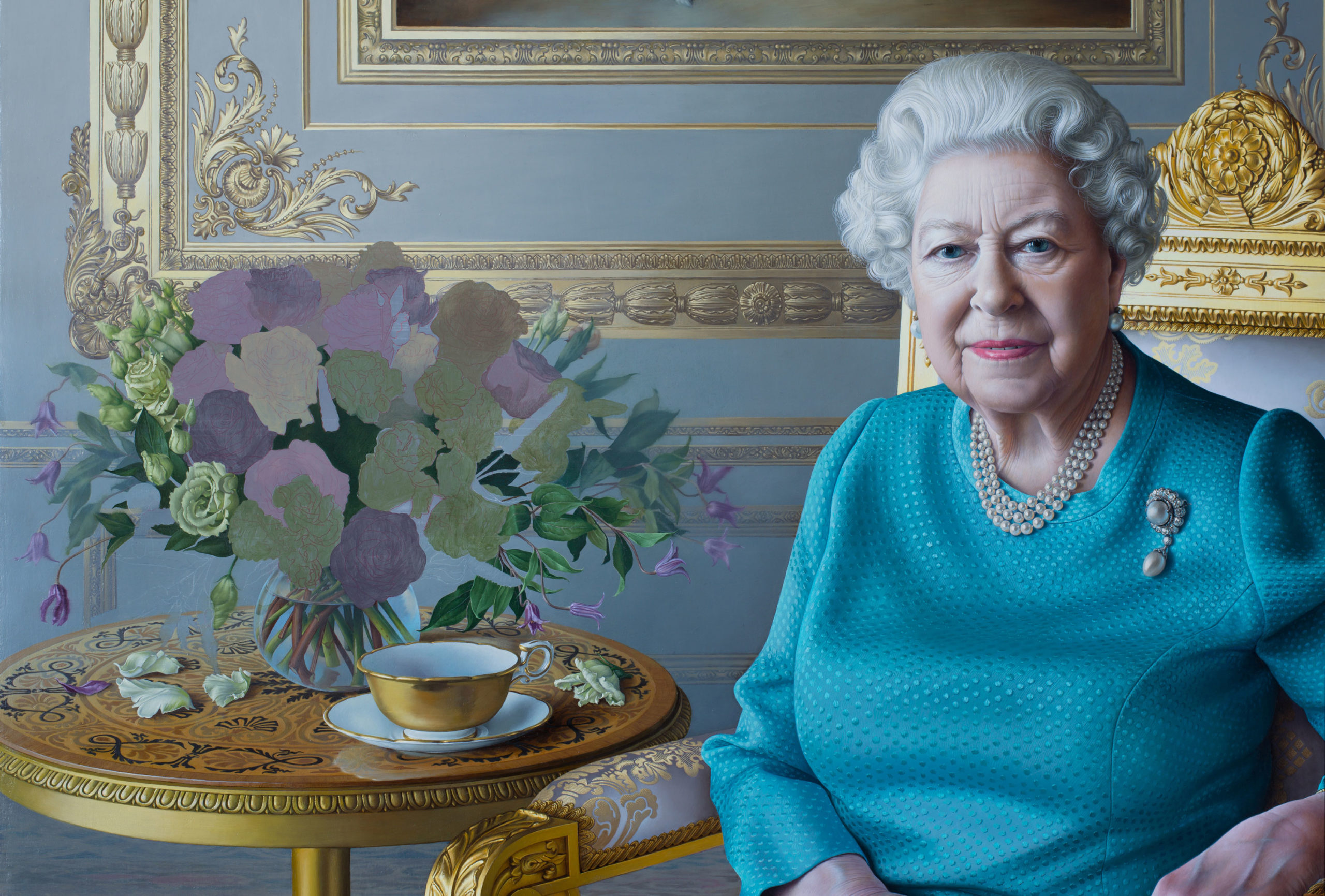 During my first meeting with Foreign Office Permanent Under-Secretary Sir Simon McDonald in March 2019, when we discussed ideas for the portrait of The Queen that he wanted to commission, I was delighted to hear that he wanted it to feel intimate. He wanted to express Her Majesty’s humanity, rather than creating a more traditional, grand, regal representation.

Her Majesty has a close and longstanding relationship with the Foreign and Commonwealth Office. Her reign is already the longest of any monarch in British history, taking in 14 different Prime Ministers and 13 US Presidents. The Queen has received thousands of foreign Ambassadors and she has personal experience of nearly every country that the UK has bilateral relations with, having undertaken State Visits overseas to over 100 countries. The Queen has hosted 111 incoming State Visits during her reign, from 62 different countries to the UK.

I remember Sir Simon saying, however, that as well as all of this, Her Majesty The Queen is also the nation’s grandmother. He hoped this portrait would complement the Pietro Annigoni painting made towards the beginning of The Queen’s reign. He felt no painter had so captured her humanity and dignity in the second half of her reign and he hoped this portrait would be a culmination – and these ideas stayed with me throughout the painting process.

The first sitting was in July 2019 at Windsor Castle. I had viewed the room previously and had some notion of which aspects of it might be interesting to include in the portrait. On meeting The Queen I was struck by several qualities: firstly by her radiance, but also her keenness, her down-to-earthness, her humour and her warmth.

From this first sitting I prepared two layout sketches, both a variation on the same idea. I always like to prepare compositional sketches, especially for portraits, as I find it a very useful way to resolve the mood of a work and the hierarchy of light. I also like to show the client the direction of the work. Both Sir Simon and I agreed that a full-figure portrait felt right. The composition of the painting has a very careful structure, which is typical of my work, and I always begin with painting in the background and key elements that form the pictorial space before arriving at the subject. I evolve my paintings slowly through many layers and glazes, paying particular attention to the light values as they evolve. It is a slow and painstaking technique, but I find the qualities of depth and light that can be achieved really rewarding and visually rich. I also think the time spent on a painting can be sensed when looking at it, like a 4th dimension.

Right from the outset I wanted the painting to reflect what I sensed as a strong aura around The Queen. I thought the gold of the chair and the white of her hair created a focal point of light and energy around her, which I really liked as a visual representation of this. I deliberately set this as the strongest point of light in the work.

I used the pattern of the carpet to create a sense of receding space in the painting, but at the same time I wanted that space to have a slight liminal quality, which created an interesting tension between depiction and obfuscation in the evolution of the pattern.

For some reason Holbein’s ‘The Ambassadors’ kept coming to mind as I worked on the carpet, probably because the tiled floor in that painting serves a similar purpose of ‘setting the stage’.

The flowers were intended to add an organic touch to soften the strong architecture of the composition. But I also wanted them to serve as a visual allegory, in a very subtle way, of organic time, of the seasons of life, so some flowers are moving, some fading.

The room in which the sitting took place contained many beautiful historical portraits of past monarchs, which I somehow wanted to include in the composition of my portrait, even if only glimpsed. The one that most captivated me was Gainsborough’s beautiful portrait of Queen Charlotte with her charming little dog, so I decided to include the bottom section of his portrait in the background of mine. I felt the addition of the dog, even as art imitating art, added a whimsical and warm touch to the portrait and of course dogs in paintings traditionally symbolise faith and loyalty as an attribute of the subject, which also felt very apt.

The painting process from beginning to end took seven months, with an additional sitting in February. Of this time, the last two months took place while the UK was under full lockdown restrictions, which proved to be the most focused and concentrated phase of work for me.

It was of course a huge honour to be asked to paint The Queen, but all the more special for me as this came as a result of Sir Simon having seen my winning portrait of my mother at the BP Portrait Award 2018 at the National Portrait Gallery. It was an added unexpected gift that my mother’s portrait brought me!