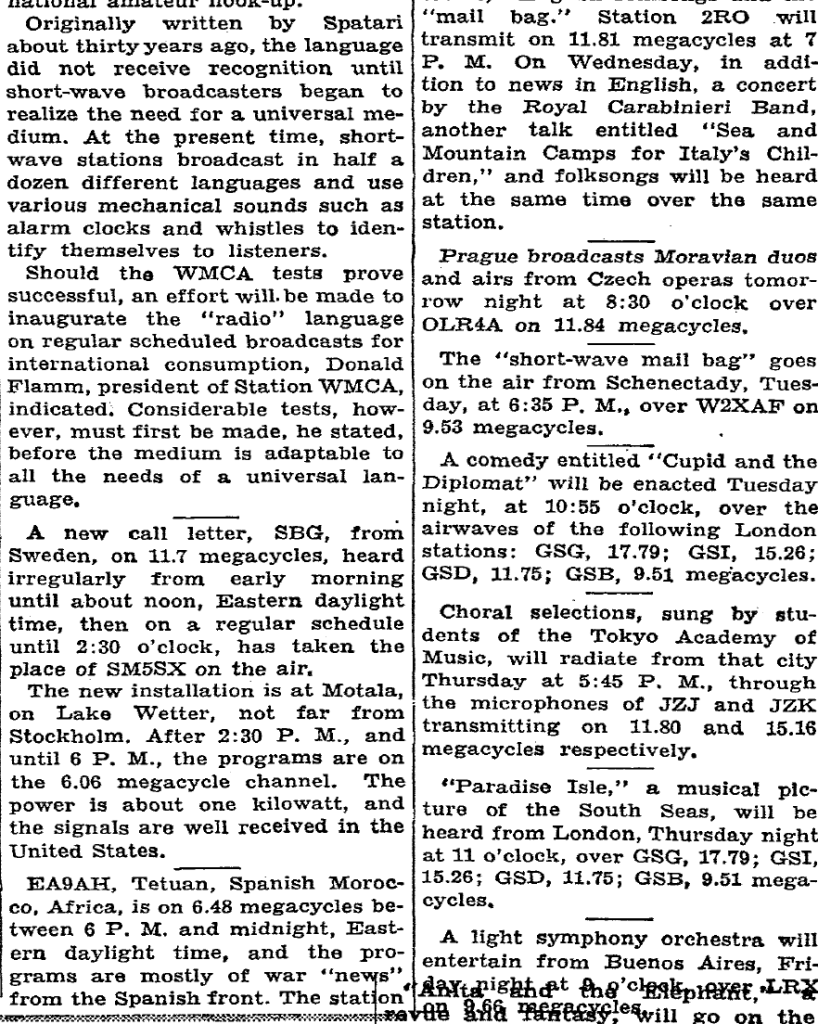 Shortwave radio was a mainstay of international news and information programs. It was the “new media” embraced to bypass and overcome the censorship of cables, the “old media.” This was particularly true in the United States. Radio broadcasting was seen as such an important and critical element to our national security a century ago that the Secretary of the Navy, a newspaper owner interested in the psychological defense of the nation, tried several times to nationalize wireless transmitters. He may have failed, but he contributed to forcing a British firm to sell their U.S. broadcasting assets which became the Radio Corporation of America. Indicative of the importance of the medium, RCA voting stock could only be owned by U.S. citizens, a restriction that was not removed until the 1980s.

Shortwave radio was used by nations for engagement, to distribute news and information to faraway places. It is not surprising then to see a new article urging the use of shortwave today to penetrate censorship in China.

This is brought to the public’s attention in “How Dissidents Are Using Shortwave Radio to Broadcast News Into China.” The basic proposal sounds great in theory, but reality is something else.

In 2014, I chaired and directed a special subcommittee at the then-named Broadcasting Board of Governors to look into the utility and value of shortwave broadcasting as it related to the agency’s mission. There were severe pressures to eliminate all shortwave broadcasting on the a) assumption that digital could reach everyone (or reach anyone that mattered) and b) basis that shortwave infrastructure is relatively very expensive, especially if the target audience is quite small, and the money could be better used on other technologies. The report, To Be Where the Audience Is (August 2014), was the result of internal analysis, interviews and analysis from outside the agency, comments from State Department, including from officials in the areas then being served by BBG shortwave, comments from the Defense Department, and comments from the public (inside and outside the U.S.).

There were some regions where shortwave remained (five years ago) critical. In places like China, the shortwave audience had shrunk considerably. One thing about shortwave radio users is once they leave, they rarely come back. Besides being asynchronous mode of communication (you need to be listening at the moment of broadcast), the channel (frequency) will change according to time of year and environmental issues, requiring additional work on the part of the user to get the signal. This latter point is significant for the new or inexperienced user than the “old hands” and it can be overcome by advertising on other mediums and word of mouth.

Shortwave has value, but it appeals most to hobbyists and to those who hear the concept but not the practical realities. It does reach across huge distances, readily flowing from one country to another irrespective of national boundaries. A single broadcast can blanket an entire country or broad regions. Shortwave radios, and kits to make the radios were relatively inexpensive and widely available. Users could tune in to hear the news and languages of faraway lands. Newspapers printed broadcast schedules and dedicated columns to programs discovered on the air. Some towns even instituted “silent nights” where local radio stations went off the air to reduce interference and improve reception of long-distance shortwave signals.

Shortwave is often a lossy format, which means it is not clean and clear as one often hears from the local FM station. It is suited for long-form storytelling when not hearing a word every now and then does not lose the listener.

It is also easy to jam and China has historically spent vast resources on jamming signals quickly and continuously. Jamming is easy: broadcast a noise of some kind (words, static, music, etc) at the same frequency. Considering the Chinese government’s transmitters are closer to the target users in this (and most) cases, jamming is relatively easy, efficient, and effective.

Not mentioned in the article is DRM, or “digital shortwave.” This is understandable as it is an unrealistic alternative for this target audience, but it is worth mentioning. The sets are expensive, hard to get, and not a superior alternative in the eyes of potential users. There is limited content available (because there are relatively few users, a classic chicken-and-egg problem) and, in 2014, a DRM set was, five years ago, at least twice the price of a complete Ku Band satellite dish setup that offered rich video and audio content.

By the way, India was, in 2014, investing heavily in DRM, for domestic and foreign audiences (including, interestingly, in Russian to Russian territories). They later ended that program.

With regard to BBG (now USAGM) audience in China, the estimated shortwave audience in China (Mandarin) was 0.03%. Even if we inflate that number x10, that is a very high “listener-for-dollar” cost that suggests other methods of engagement, or information delivery, maybe more effective. Most alternatives are asynchronous, which has its own advantages. For example, the audio (or video or text, or a combination) can be uploaded to platforms like GitHub or AWS, which Beijing cannot or does not block or censor effectively (see the idea of “Collateral Freedom“).

There were, and probably will continue to be, reports that Chinese dissidents listened shortwave, but this is at a very high cost.

There is another side that shortwave proponents may raise: when disaster strikes in China, at least up until five years ago, the authorities distributed SW sets to enable information delivery to stricken areas when the information infrastructure was knocked out. But, as noted above, this is not the preferred consumer’s platform and revert to using more vibrant, richer, easier to use, entertaining alternatives.

Research has shown repeatedly that once users leave the platform, they do not come back. There was an argument that shortwave is an alternative to an information blackout (ie shutting down internet access), but at the time of the report, there were many recent examples showing that users preferred to, essentially, “sit in the dark” or sought workarounds rather than return to the legacy shortwave platform.

This raises more questions about who to reach and why. Presumably, the Sound of Hope wants to reach, and influence, more than farmers in deeply rural and disconnected villages far from cities, where jamming is less effective due to the great expanses. If Sound of Hope’s audiences are in the cities, it is likely their target audiences will see shortwave as an inconvenience, or at best, a novelty, and will be more likely the target of effective jamming. Maybe the Chinese that seek avocado on toast will want their parent’s shortwave set?

For some audiences and markets, shortwave remains important. China is not one of them.