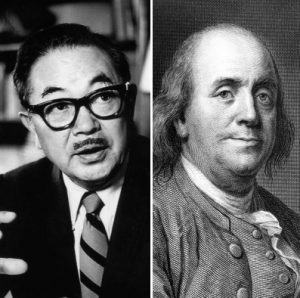 When I entered the Foreign Service in 1979, my class of 16 new Public Diplomacy officers was taught to cultivate “the Foreign Service manner,” the habits of diplomacy — listening, accurate reporting, careful speaking, and a certain care in asking questions without an edge.  So much of Public Diplomacy is about “telling,” it’s good to have reminders about conversations and “listening.”Every day, American diplomats meet citizens of other countries, drawn from all walks of life.  This opportunity to meet people is a satisfying feature of Foreign Service work, but from time to time officers must deal with individuals who represent nations or ideals we dislike.  Others have unpleasant personalities.  Among political figures, some are extremists.  Among businessmen, some are unsavory.  Among officials, some are corrupt and dissipated.  Among social leaders, some are bigoted.  Foreign Service Officers must deal with them all alike.An American diplomat will always represent opposite values, of course, but it’s necessary to maintain a cordiality that can keep lines of communication open.  It’s also important to get to know disagreeable people because they may represent a larger body of thinking in society.  Washington policymakers must be informed by Embassy officers who have had the patience to hear at first hand, and then analyze, the objectionable thoughts.Over the years I learned it’s possible to converse and to ask questions in a manner that elicits information but lacks “edge.”  A question posed with an edge might be: “Why hasn’t your government done anything to curb the reality of sex-selective abortion?  It’s gendercide!”  An individual with the Foreign Service manner would pose it differently.  “I’ve been noticing statistics that show that among your newborns, boys outnumber girls.  Have you and your colleagues been examining this?”

Back in the 80s, I watched news conferences and talk shows and rated journalists on their “manner.”  Sam Donaldson of NBC News, caustic and abrasive, seemed unable to ask a question unless it was provocative and sometimes insulting.  He made the press secretary or the interviewee defensive.  On the other hand, I marveled how Ted Koppel’s subtle and well-spoken manner elicited responses that were quite revealing, pro or con, on an issue.  (I editorialize from watching recent White House press briefings that there are currently more Donaldson wannabes than journalists who emulate Ted Koppel.)

As I grew into my role as a diplomat, I came across advice given by Professor S. I. Hayakawa (1906-1992), who taught linguistics at Berkeley.  He was later elected Senator from California.  His advice was to get in the habit of saying “Tell me more.”  Here’s the way he explained it:

… let us say that we are sympathetic to organized labor, and someone says to us, “Labor unions are rackets.”  Our immediate temptation is to say, “They are not” — and the battle would be on.  But what is the truth value of the statement?  It is clearly neither 0 percent (“No unions are rackets”) nor 100 percent (“All unions are rackets”).  Let us then silently grant a tentative truth value of 1 percent (“One union out of 100 is a racket”) and say, “Tell me more.”  If there is no more basis for the remark than the vague memory of something somebody once wrote in a newspaper column, the assertion will fizzle out shortly, so that we need not be bothered anymore.  But if the person does have experience with even one instance of union racketeering, he is talking about something quite real to him, although he may be vastly overgeneralizing his experience.  If we listen sympathetically to his experience, the following are some of the things that may happen:

Hayakawa recommended saying “Tell me more” and then “to listen before reacting.”  It has the advantage of avoiding inferences (that the nasty remarks show the speaker is a “labor hating reactionary,” in this case) based only on partial information.  Hayakawa’s full treatment can be found on pp. 129-131 of the fifth edition of his Language in Thought and Action.

Hayakawa’s counsel reminded me, too, of a passage in Benjamin Franklin’s autobiography.  Discussing his project for personal moral improvement, he said:

I made it a rule to forbear all direct contradiction to the sentiments of others, and all positive assertion of my own.  I even forbid myself … the use of every word or expression in the language that imported a fix’d opinion, such as certainly, undoubtedly, etc., and I adopted, instead of them, I conceive, I apprehend, or I imagine a thing to be so or so; or it so appears to me at present.  When another asserted something that I thought an error, I deny’d myself the pleasure of contradicting him abruptly, and of showing immediately some absurdity in his proposition; and in answering I began by observing that in certain cases or circumstances his opinion would be right, but in the present case there appear’d or seem’d to me some difference, etc.  I soon found the advantage of this change in my manner; the conversations I engag’d in went on more pleasantly. The modest way in which I propos’d my opinions procur’d them a readier reception and less contradiction; I had less mortification when I was found to be in the wrong, and I more easily prevail’d with others to give up their mistakes and join with me when I happened to be in the right.

If this advice appears to curb forthrightness, it’s because diplomats try to avoid giving unintended offense.  Rest assured that Foreign Service officers can be wonderfully blunt and direct — intentionally — when delivering demarches as representatives of the U.S. government.  In ordinary transactions, however, heeding the advice of a California senator, practicing the style of Poor Richard, and saying “Tell me more” is good advice.

(This essay originally appeared on the Public Diplomacy Council website on February 4, 2014.)

Donald M. Bishop is the Bren Chair of Strategic Communications at Marine Corps University in Quantico, Virginia.
Mr. Bishop served as a Foreign Service Officer – first in the U.S. Information Agency and then in the Department of State – for 31 years. Read More