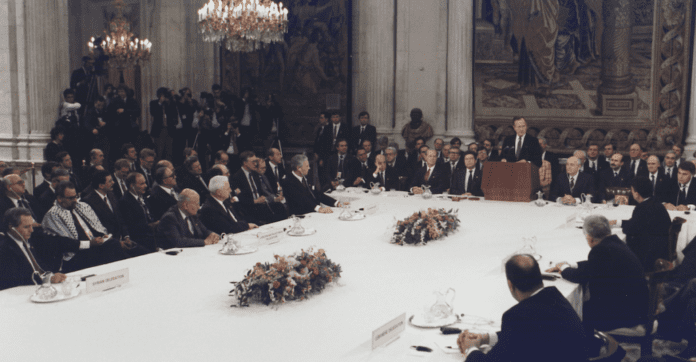 At the peak of American power and influence, President George H.W. Bush addressed the 1991 Madrid conference, where the United States brought together Israelis and Palestinians for the first time. Photo by U.S. National Archives.

The United States’ soft power and diplomatic influence have been waning for years, yet American officials have pretended that they run the world as if it’s the early 1990s. If they needed glaring proof that the country that achieved the greatest military and economic might in history is now a recovering superpower, the Covid-19 pandemic has provided it in spades.

Washington’s failure to lead a coordinated global response to the coronavirus — perhaps one similar to its efforts to fight the 2014 Ebola outbreak — and the disaster that has been its handling of the crisis at home have sent powerful signals to the world. The competence, common sense and leadership by example that sustained much of the outsized U.S. diplomatic weight for decades, even through major foreign policy mistakes, seem to have vanished.

The United States must accept that imperial diplomacy, underpinned by the philosophy that everything in every country is its business, is a thing of the past. The peak of its power at the end of the Cold War, and especially after the 1991 Gulf War, is unlikely to be approached again anytime soon. It’s much more difficult today to get other countries to do — or not do — things than it was back then. Leaders from Turkey to Hungary to South Africa have routinely ignored Washington’s wishes for years — and those are allies and friends. China’s rise is likely to upend the international system in more ways than we are ready for.

The post-Covid-19 world will need effective diplomacy more than it has in decades, especially if nationalist forces gain ascendance, as some predict. The United States will still be a major power for the foreseeable future. But if it’s to remain dominant in the long term, it must change drastically both the structures and conduct of its international diplomacy.

First, the United States needs a new diplomatic strategy — something more realistic and specific than “running the world” — which it can explain to the American people and the world in plain English. It can no longer be expected to solve any problem anywhere. U.S. diplomacy must contribute directly to the national interest by protecting the country’s security, bolstering its prosperity and promoting its values. The sweeping and overly ambitious past policies of spreading liberty, democracy and good governance around the world, once dubbed “transformational diplomacy,” need serious rethinking. Although the current administration hasn’t supported that agenda, it has failed to articulate a foreign policy of its own and has shown utter contempt for diplomacy. A new strategy should have much more to do with countering China’s increasing influence, as well as cyber, environmental and health threats, than with the “freedom agenda” or the “war on terrorism” of the recent past.

Second, the United States needs a new diplomatic attitude. Less hubris and more humility would be a good rule of thumb. The world owes a great debt of gratitude to American diplomacy. From helping to build the so-called liberal international order after World War II to its role in winning the Cold War to reducing poverty and disease in developing countries, it has made it possible for millions to live free, stable and decent lives. But times have changed. For years, other countries have watched in disbelief successive debacles in U.S. democracy and governance — from lengthy government shutdowns to a deplorable health care system to an electoral system that handed power to a man who cares little for facts, science, empathy or anything bigger than his own personal and political interests. In the eyes of the world, the United States has lost the power of example. Until it puts its own house back in order, its diplomacy will be hamstrung.

Third, U.S. diplomacy needs a much stronger prioritizing muscle. For decades, the United States has professed so many interests, taken on so many challenges and ventured into such wide and deep involvement in numerous places that it has often lost sight of what matters above all else. “We just do stuff,” one former senior career diplomat used to tell me. Sometimes, intended priorities became obsessions, such as terrorism after 9/11, leading the State Department to create unsustainably giant embassies in Iraq and Afghanistan, or to pour huge resources into ineffective programs to “counter violent extremism,” including in countries where violent extremism barely existed.

Fourth, the U.S. diplomatic infrastructure needs a vigorous overhaul. Every secretary of state since the end of the Cold War has called for State Department reforms but delivered little more than cosmetic changes, such as moving a country from one geographic bureau to another, relocating a few Foreign Service positions from Europe to Asia, or creating yet another special-envoy post. The department’s structure of “regional” and “functional” bureaus may have been suited for conducting superpower diplomacy in the 1990s, but it’s outdated and inadequate in dealing with 21st-century challenges, which don’t fit nicely into an organizational chart. A new structure should be nimble and dynamic, so it can respond to shifting priorities and new threats in such areas as cyberspace, climate and global health.

In addition, the department should rethink its global footprint of 275 embassies, consulates and other diplomatic missions. Some of those might have to be closed, at least temporarily, especially if the foreign affairs budget doesn’t increase. Having an embassy in almost every country is becoming a luxury the United States may not be able to afford. Ever since I visited the new $100 million embassy in Swaziland shortly before it opened in 2015, I’ve had serious doubts that the investment was justified. According to the State Department, the top U.S. priority in the tiny southern African monarchy of 1.4 million people is “political and economic reform.” It’s not clear how that contributes to U.S. security and prosperity — or to any direct national interest. The trouble is, the polygamist king, who has a tight grip on power in the country he renamed Eswatini, cares little about what American officials advise or ask of his government. And there are two other U.S. embassies within 200 miles, and two more within 400 miles.

Fifth, the State Department must truly be the leader and manager of American diplomacy. The National Security Council should stick to coordinating policy and venture into implementation in the rarest of occasions. Other agencies’ representatives at overseas posts should stop freelancing and ignoring the ambassador and the mission’s management. Embassies need to function as one team with a unified strategy, not a loose collection of government departments that talk much more often to colleagues in Washington than to co-workers in the same building. And employees of other agencies should undergo mandatory training before serving overseas. Now most of them arrive at posts knowing next to nothing about diplomacy or how an embassy operates.

Sixth, the State Department needs a new workforce strategy. A good start would be to eliminate 10 percent of low- and mid-level management positions in Washington and send more Foreign Service officers abroad to alleviate chronic staffing shortages. According to a 2019 audit report of the embassy in another African country, Chad, by the State Department inspector-general, two out of three positions in the political section have remained unfilled for years. At the same time, the bloated bureaucracy in Washington has led to wasteful duplication, slow decision-making and avoidance of responsibility in an ever-increasing chain of command.

As well as hiring many more new officers once the Covid-19 crisis is over to make up for the hundreds who have left or been forced out under the Trump administration, the State Department should create a Foreign Service Reserve Corps. Career diplomats are generalists, and help from outside experts in economics, business, law, science, technology, medicine, engineering, communications and other professions would make an immense difference in dealing with non-traditional and emerging challenges. Many Americans in the private and nonprofit sectors would be happy to serve overseas — they would take assignments for up to three years, the duration of a regular Foreign Service posting — and some of their employers might even be willing to keep their places while they are abroad.

Seventh, the State Department needs a revamped, rigorous program for mandatory diplomacy training and professional development. The current six-week “orientation” for new Foreign Service officers should be expanded to a year-long, proper in-depth training, including a four-month classroom curriculum, followed by a four-month rotation in different department offices in Washington, and then a four-month rotation in various sections at an embassy abroad. The longtime system of relying on mainly on-the-job training, taking five or more years for an officer to learn how to practice diplomacy, is irresponsible — not only is it more expensive, but it depends almost entirely on an officer’s supervisors, who may not be the best to learn from.

Eighth, the corrupt practice of handing out diplomatic posts to unqualified but wealthy or connected political appointees must stop. The United States can no longer afford to entrust amateurs with such enormous responsibility. The longtime nonsensical tradition of reserving 30 percent of U.S. ambassadorships for non-career appointees, which the Trump administration has stretched to over 40 percent, must end. Qualified outside experts should still be welcome, but such nominations should be rare exceptions, not to exceed 10 percent. The entrenchment of political hires not only at senior levels but deeper into the mid-ranks than ever before has led to further politicization of American diplomacy. No wonder the world has picked up on diminished competence.

As the United States grapples with the effects of Covid-19, it will have to work with other countries to recover from the pandemic, ensure stability and restore economic growth. Our government, businesses, NGOs, academia and individual Americans will need help from foreign lands. Utilizing U.S. diplomacy will be indispensable as we strive to get back on our feet. Even through that trial, we must modernize and adapt our diplomatic capacity to the new international reality.

You don’t have to be a superpower to be a global leader.

An Eight-Step Program for a Recovering Superpower

Nicholas Kralev, the executive director of the Washington International Diplomatic Academy, is the author of “America’s Other Army: The U.S. Foreign Service and 21st‐Century Diplomacy.”