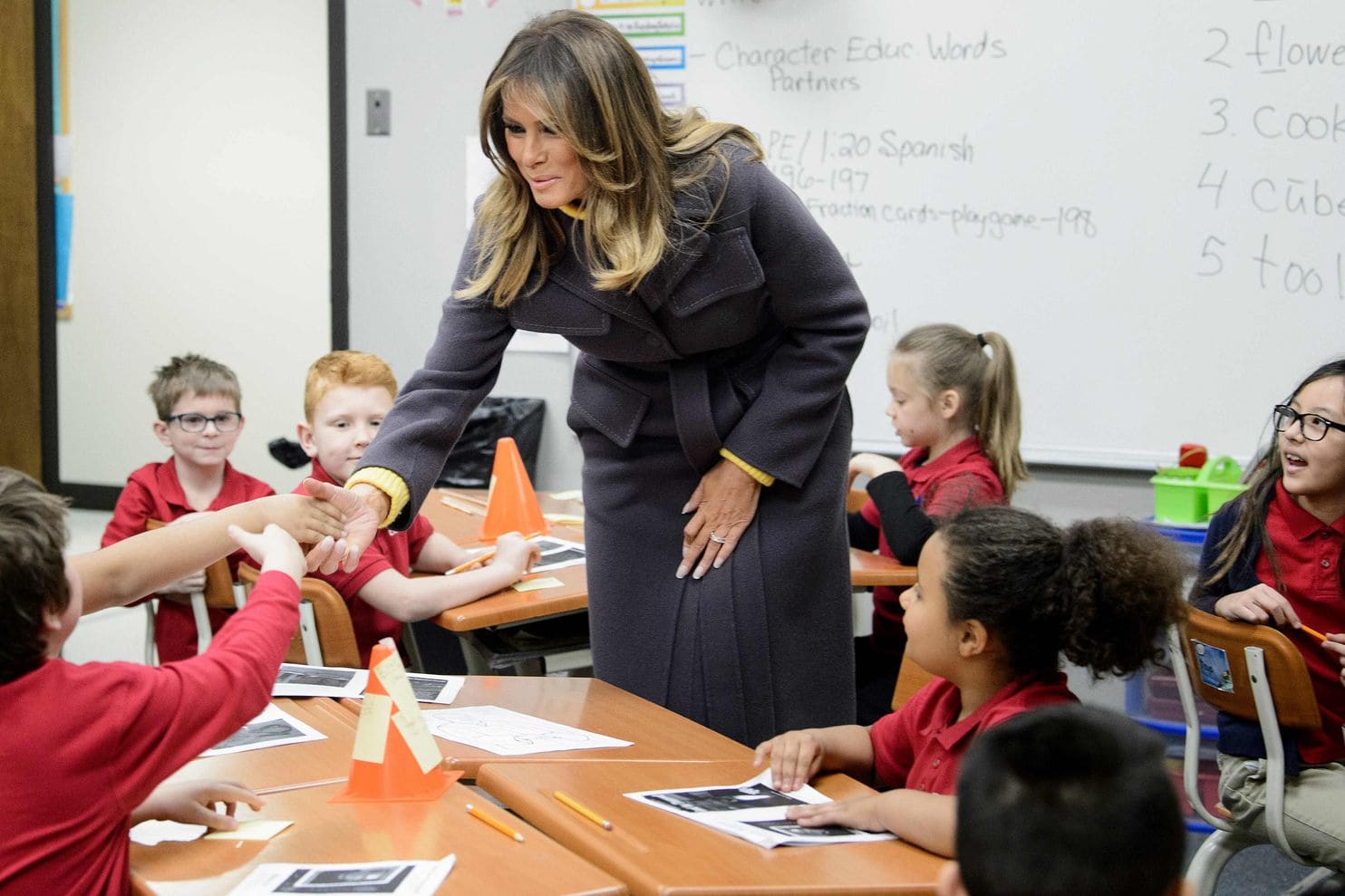 Image from article: Melania Trump visits a language arts class at the Dove School of Discovery on March 4. (Brendan Smialowski/AFP/Getty Images)
The visit by Melania Trump to a charter school in Tulsa on Monday seemed to be a picture-perfect success for the first lady. She complimented pre-K students on their crayon skills and observed ­middle-schoolers conducting science experiments. She made small talk and warned a second-grader who had complained about her homework that it was “very important.”But the first lady had just stepped into a zone fraught with potential diplomatic peril with her stop promoting her Be Best initiative that aims to improve children’s well-being. The Dove School of Discovery, a Tulsa charter institution that focuses on character education, is believed to be part of a network of schools in the United States and abroad linked to the Gulen movement, a secretive religious movement inspired by a 77-year-old Turkish Muslim cleric.Turkish media and observers of the Turkish-U.S. relationship professed surprise that Melania Trump would visit a school identified with cleric Fethullah Gulen, whose network the Turkish government calls a terrorist organization.“Melania Trump visits FETO charter school in Oklahoma,” read the headline on TRT World,Turkey’s state-run broadcaster, following Trump’s visit. Turkish authorities refer to Gulen’s movement as FETO, an acronym for the Fethullah Terrorist Organization.Stephanie Grisham, a spokeswoman for the first lady, said the site was “both recommended and vetted” before the visit and shrugged off any suggestion that there was significance to the choice besides the school’s achievements. “The school was recognized with the 2018 National School of Character award,” she said, citing an accolade given by Character.org, a nonprofit group that certifies and promotes ­character-development programs. “It was chosen because of their excellent academics and commitment to character education. Their diverse staff and student body should be celebrated.”But Soner Cagaptay, the director of the Turkish Research Program at the Washington Institute for Near East Policy, was perplexed by the decision.“There are just no public-diplomacy [JB emphasis] Brownie points to be gained in terms of this visit,” Cagaptay said.Gulen, for whom the network of schools is named, has lived in self-imposed exile in rural Pennsylvania since 1999 and is now a permanent U.S. resident. The State Department has raised concerns about his operations, but a number of federal investigations over the years have petered out with no charges.The government of Turkish President Recep Tayyip Erdogan has accused Gulen of spearheading a failed coup in 2016 and has demanded the cleric’s extradition from the United States. The U.S. failure to do so remains a sore point in the countries’ often-tense relationship. During a post-coup government crackdown, tens of thousands of Gulen’s followers in Turkey were arrested, fired from public sector jobs or fled the country.Gulen has denied orchestrating the coup.The first lady’s visit to a school believed by Turkey to be Gulen-associated, Cagaptay said, would be seen as an “ill-fated move” in all corners — both by Erdogan’s supporters and by his foes, who still remember Gulen’s former alliance with the president they despise. Turkey’s foreign ministry did not immediately respond to a request for comment on the school visit.Robert Amsterdam, a lawyer who once represented the Erdogan government and who wrote a book about the Gulen charter school network called “Empire of Deceit,” said he couldn’t speculate about the first lady’s motives. But he said Turks could find her tacit stamp of approval disappointing.“For people in Turkey who are waiting for the U.S. to wake up, it’s disheartening,” Amsterdam said. “America seems willfully blind to a criminal organization operating within its school system.”Such reactions from both Erdogan partisans and neutral observers raised the question of whether the first lady — or her husband’s administration — was making a statement. The Dove School does not mention Gulen on its website or published materials, but it was founded by Turkish immigrants and linked to Gulen’s movement, according to people who study the cleric’s network, including Amsterdam.The school is one of 156 Gulen charter schools Amsterdam identifies on his website.Neither the school nor Gulen’s representatives returned calls seeking comment.The first lady’s two-day trip this week to promote Be Best was her first solo overnight mission in the United States since her husband took office. Domestic trips by first ladies are not typically vetted by the State Department or the National Security Council unless the itinerary includes meeting a foreign national, according to one former staffer to a first lady.The first lady’s office usually works with an advance team that evaluates all kinds of information about any facility that might be part of an official trip, including whether it has tax or financial troubles and who its funders are. The Department of Education might be involved with school visits.“The vetting process would have turned up information like that unless the vetting was not thorough or it was determined not to be a mitigating factor,” the former staffer said.Political inexperience and a reliance on a small circle of advisers have caused problems in the past for Melania Trump. Her tenure on the public stage got off to an awkward start when passages from the speech she made at the Republican National Convention in 2016 turned out to have been liftedfrom former first lady Michelle Obama’s 2008 address to the Democratic National Convention. And her decision to wear a jacket emblazoned with the phrase “I really don’t care, do u?” on the back on her way to a visit to facilities on the U.S.-Mexico border where immigrant children were being housed drew widespread criticism.Other than the Tulsa stop, the first lady’s three-state visit appeared to go off without hiccups. On Monday, she also traveled to Microsoft headquarters in Washington state to watch demonstrations of new technology and safety programs, and she concluded the trip Tuesday with an appearance at a Las Vegas town hall about curbing the opioid crisis.Kareem Fahim in Istanbul contributed to this report.Original Article