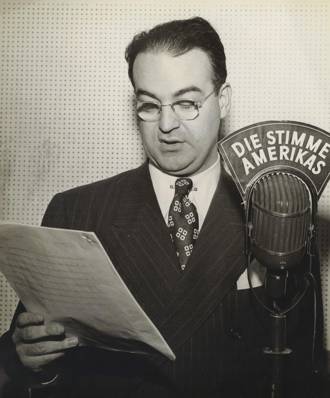 pdaa.publicdiplomacy.org
By Thomas MillerIf the measure of a man is the legacy he leaves behind, few people can match Dr. Walter Roberts. Walter Roberts helped found the Voice of America, played a key role in establishing the Salzburg Seminar, launched the Fulbright program in Yugoslavia, and helped found the precursor to the Institute for Public Diplomacy [JB emphasis] and Global Communications at George Washington University. Thanks largely to the generous donations of Walter Roberts, his family, and his very wide circle of friends, a Walter Roberts Endowment continues to support public diplomacy activities at the university.

Fleeing his native Austria in 1938, Walter Roberts emigrated to the U.S. He was later recruited as one of the first employees of the Office of the Coordinator of Information, which later became the Voice of America. “I was there at the creation,” Walter Roberts once said. In addition to working at the Voice of America for eight years, Dr. Roberts served for ten years as the Executive Director for the Board for International Broadcasting, which oversaw Radio Liberty and Radio Free Europe.While working at the Austria Desk of the Department of State in 1950, Dr. Roberts “devised a way for the U.S. Government to make use of its holding of then unconvertible Austrian currency” (https://takefiveblog.org/2014/07/) to fund the Salzburg Seminar in American Studies, now known as the Salzburg Global Seminar, which has brought more than 36,000 people together over the years from 170 countries with the mission of challenging present and future leaders to shape a better world.In the early 60’s as Public Affairs Officer in Yugoslavia, Walter Roberts persistently made the case at the Ministry of Foreign Affairs of the benefits of having a Fulbright program. After a successful visit to the United States, where President Tito felt particularly well received by President Kennedy, Tito asked his cabinet whether there was anything Yugoslavia could do to please Kennedy. The response from the Foreign Minister was to launch a Fulbright program in the country. Senator Fulbright himself flew to Yugoslavia for the signing ceremony. As Associate Director, of USIA, the most senior career position in the agency in 1971, Walter Roberts helped set the direction of U.S. Public Diplomacy. In 1973, Dr. Roberts wrote a book Tito, Mihailovic and the Allies, 1941-1945, which was praised by Foreign Affairs at the time as the best book on the subject and is still considered a must read. A further tribute to Dr. Roberts’s impact on U.S. public diplomacy was that he was appointed by Presidents of both parties ( George H.W. Bush in 1991 and William J. Clinton in 1992) as a member of the Advisory Commission on Public Diplomacy. In this capacity he advised the President, the Secretary of State, and the Director of USIA on press and information activities of U.S. missions abroad, and the government’s international radio and television operations.Long after retirement, Dr. Roberts continued to create lasting institutions. In 2005, he helped establish the precursor to the Institute for Public Diplomacy and Global Communication. The Walter Roberts Endowment continues to support George Washington University’s public diplomacy efforts. The prestigious annual Walter Roberts Lecture has included speeches by Bruce Wharton last year on “Truth Decay” and recently by Ambassador Michael McFaul on U.S.-Russian relations (for a more complete list, please visit https://ipdgc.gwu.edu/walter-roberts-annual-lecture). The event was attended by over 250 while the live video on the University’s Facebook page reached nearly 10,000 people worldwide. The Endowment continues to expand its activities and it launched an initiative last year in honor of members of Congress who have been particularly supportive of public diplomacy. The award, given to Senator Bob Corker supported a sports diplomacy project in Tennessee. Descriptions of these awards can also be found at the Institute of Public Diplomacy and Global Communication website https://ipdgc.gwu.edu/). A brand new award will go to a deserving George Washington University student to work with an institution to bring to fruition a project important to the organization. This brief description has just skimmed the surface of Walter Robert’s accomplishments. Many of us without even realizing it have been touched directly or indirectly by Walter Roberts’ legacy. Through the Walter Roberts Endowment he continues to have an impact on developments in public diplomacy.Thomas Miller is a member of the PDAA Board of Directors.Original Article