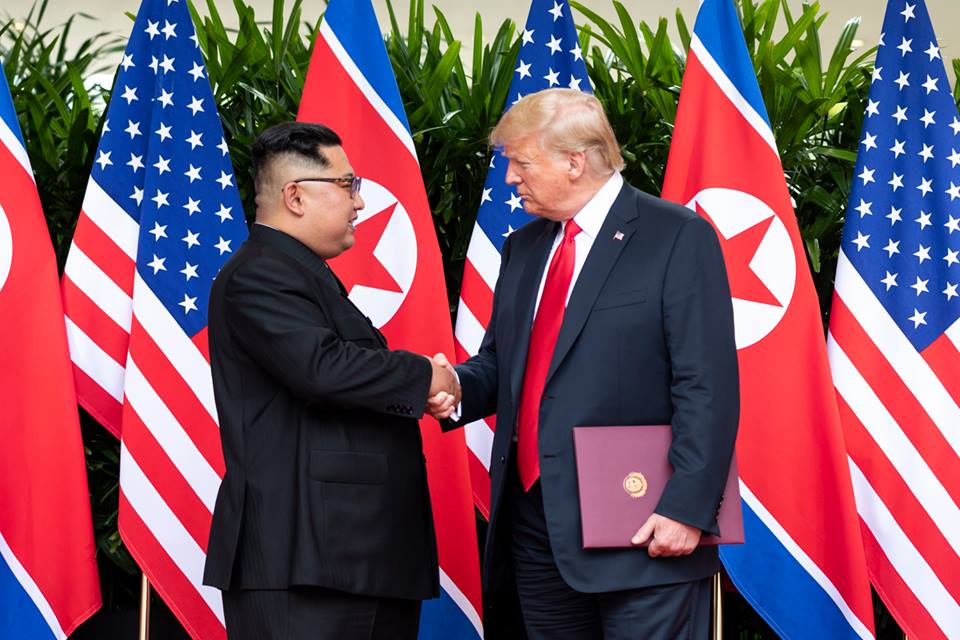 pdaa.publicdiplomacy
(Updated Feb. 18, 2019) After decades of hostile or no communication, difficult, often halting efforts to negotiate, “soft power” diplomacy (including visits to North Korea by the New York Philharmonic and basketball player Dennis Rodman), and a dangerous ratcheting-up of nuclear brinksmanship in 2017, in March 2018, U.S. President Donald Trump and North Korean leader Kim Jong Un agreed to meet. That first-ever US-DPRK summit took place on June 12, 2018, in Singapore. Hailed as a success by both leaders and by South Korea, which played a key role in brokering it, the summit’s results have been mixed or limited, although both leaders have pledged to hold another summit this year.

President Donald J. Trump with North Korean leader Kim Jong Un | June 12, 2018 (Official White House Photo by Shealah Craighead)Looking beyond the prognosis for success of this latest effort, how can and should the United States engage a hard-to-reach country like North Korea, both diplomatically and using the tools of public diplomacy? [JB emphasis] PDAA’s Feb. 28 luncheon program will feature three distinguished experts who will discuss these issues with us. Ambassador Robert R. King, who served as U.S. Special Envoy for North Korean Human Rights Issues from 2009 to 2017, will begin the discussion by reviewing diplomatic engagement efforts with North Korea, particular those related to human rights issues, and offering his thoughts on how future negotiations could be successful. As Special Envoy, Ambassador King coordinated and promoted U.S. efforts to improve human rights in North Korea, negotiated with senior North Korean officials, secured the release of an American citizen being held in North Korea, and represented the U.S. in Geneva and New York on North Korean human rights issues. Ambassador King is currently Senior Advisor to the Korea Chair at CSIS, a Senior Fellow at the Korea Economic Institute, and a Board Member of the Committee for Human Rights in North Korea. He earned his Ph.D. at the Fletcher School of Law and Diplomacy at Tufts University and is the author of five books, as well as many journal articles and book chapters. Ambassador Joseph Yun, who was originally scheduled to speak on diplomatic engagement with North Korea, will be part of the CNN team covering the U.S.-North Korean summit in Vietnam, February 27-28. We are very fortunate that Ambassador Robert King has agreed to discuss diplomatic engagement, particularly as it relates to human rights issues, at our February 28 program.To discuss engagement with North Korean and other hard-to-reach audiences through civil society, we will be joined by Dr. Lynn Lee, Associate Director for Asia at the National Endowment for Democracy. Dr. Lee is responsible for NED’s democracy and human rights programs for the East Asian region, including North Korea, China, and Vietnam. Prior to joining NED, Dr. Lee was a senior project manager at InterMedia. She holds a doctorate in development studies from Sussex University and an M.A. from the University of Wisconsin, Madison. Our third speaker, Dr. Shawn Powers, will discuss U.S. Government–supported broadcasting as a means of engagement with North Korean and other challenging audiences. Dr. Powers is currently the Acting Chief Strategy Officer at the U.S. Agency for Global Media (USAGM), which oversees VOA, Radio Free Asia, and other U.S. Government broadcasting services. He will discuss U.S. broadcasting’s initiatives to reach North Koreans as well as Chinese, Iranian, and other hard-to-reach audiences. Prior to joining USAGM, Dr. Powers was Executive Director of the U.S. Advisory Commission on Public Diplomacy. He is currently on leave from his position as Associate Professor at Georgia State University, where he leads the Center for Global Information Studies. He earned his Ph.D. from USC’s Annenberg School for Communication and Journalism and has held fellowships at the London School of Economics, Oxford University, and the University of Pennsylvania. The discussion will take place on Thurs., Feb. 28, from 12:00 to 2:00, at DACOR Bacon House, 1801 F St. NW. To register, please complete the form on page 7 of the newsletter or register on-line using the drop-down menu below. Deadline is Feb. 25.