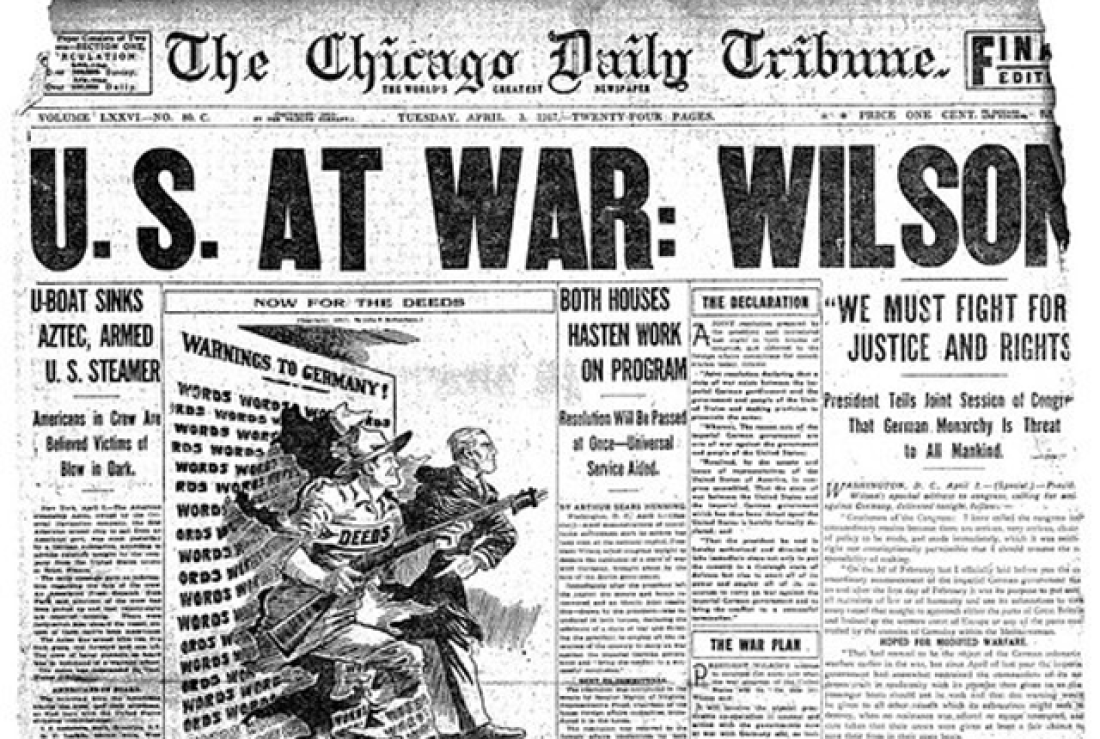 [I]n the speech’s climactic passage, Wilson laid his request before Congress:
With a profound sense of the solemn and even tragical character of the step I am taking and of the grave responsibilities which it involves, but in unhesitating obedience to what I deem my constitutional duty, I advise that the Congress declare the recent course of the Imperial German Government to be in fact nothing less than war against the Government and people of the United States; that it formally accept the status of belligerent which has thus been thrust upon it, and that it take immediate steps not only to put the country in a more thorough state of defense but also to exert all its power and employ all its resources to bring the Government of the German Empire to terms and end the war. …
Wilson hastened to emphasize that America’s fight was with the German government, not the German people, reflecting the widespread belief that the militarist, undemocratic regime of Kaiser Wilhelm II had plunged the nation into war without consulting its subjects: “We have no quarrel with the German people. We have no feeling towards them but one of sympathy and friendship. It was not upon their impulse that their Government acted in entering this war. It was not with their previous knowledge or approval.”
This assertion wasn’t just sugarcoating or empty public diplomacy, [JB emphasis] but a central tenet of the worldview which led Wilson to seek a declaration of war in the first place. Pointing to the apparent success of the recent Russian Revolution in establishing popular rule, Wilson sought to portray the war as a struggle between democracy and authoritarianism, civilization and barbarism.
This rhetoric reflected his own ideals, but also just happened to foreshadow one of the most powerful propaganda strategies employed by the government, and its allies in the press and civil society, to motivate the American people during the war:

The world must be made safe for democracy. Its peace must be planted upon the tested foundations of political liberty. We have no selfish ends to serve. We desire no conquest, no dominion. We seek no indemnities for ourselves, no material compensation for the sacrifices we shall freely make. We are but one of the champions of the rights of mankind. …

[T]he Committee for Public Information (CPI) … [was] established by Wilson on April 14, 1917 in order to promote awareness of the reasons for America’s entry into the war, generate support for the war effort, and disseminate information about how ordinary Americans can contribute.
Led by journalist George Creel, the CPI quickly grew into a powerful, well-funded propaganda machine, using every means available to persuade Americans that the war was just and discredit its opponents. Media employed by the CPI included posters, books, pamphlets, movies, gramophone records, music, live theater, and “spoken word,” including the famous “four-minute men,” an army of 75,000 speakers who could deliver a carefully rehearsed speech in favor of some aspect of the U.S. war effort in any public setting (a powerful tool before the widespread adoption of radio).
One of the main goals of the CPI was inducing compliance with the draft; it would go on to play a key role raising awareness of the “Liberty Loan” public bond sales and convincing Americans to put their savings at the disposal of the war effort, as well as defending unpopular measures like rationing.
Although propaganda doubtless played a role in shaping public opinion, America’s patriotic fervor was real and widespread. A classic cultural artifact of the era is the song “Over There,” penned by George M. Cohan in a few hours on April 7, 1917, with lyrics concluding:
Over there, over there,
Send the word, send the word over there
That the Yanks are coming, the Yanks are coming
The drums rum-tumming everywhere.
So prepare, say a prayer,
Send the word, send the word to beware –
We'll be over, we're coming over,
And we won't come back till it’s over, over there.