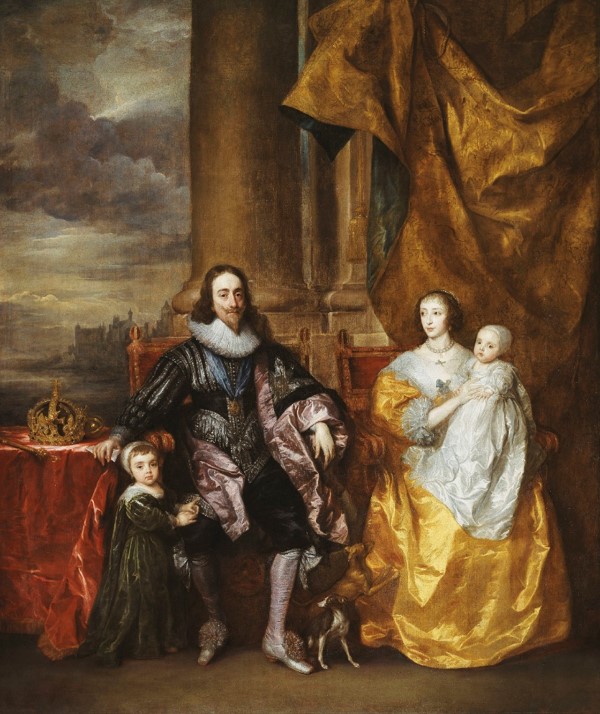 Images of leaders have always played an important role in politics. Images can capture the supremacy of a king, the daring of a field marshal or the cunning of a shrewd politician. Indeed, Napoleon’s portrait, sitting upon a fiery steed and pointing to the alps, captures his audacity and ambitions. Yet images of world leaders can also carry important political messages. Take for example the image below of Charles I. Notably, the image focuses on the king, while the British Parliament is located firmly in the background. In this image, there is no question as to who actually rules Britannia. Notably, the image was taken but a few years prior to Charles’s beheading.

The image below is taken from the Palace of Versailles where every door, gate and mirror displayed Louis the 16th, the sun god (le Roi Soleil). Through these images, the dictum I am the State was made manifest. There was no doubt within the Palace as to where power resided. Not with the nobles, or the clergy but with Louis. Having conquered Holland, acquiring Spain and extending his reaches to other continents, Louis died a miserable death while his great grandson Louis the 16th was also beheaded.

Consider the two images below. Both were taken during the negotiations of the Treaty of Versailles in 1919. In both, the image focuses on stern looking, old, white men. Stern as they must obtain peace and end a horrid war. Old because they are sages. They remember old Europe and la belle Époque. White, because whites ruled the world. These negotiations were global as they shaped entire world regions. Yet they were local as decisions were made in France. This too was a message, some ruled as were ruled.

WW2 offered similar images, shown below. Again this is an image of old white men. And yet it’s message is different. There is an element of levity in it. Two of three leaders are visibly laughing, the third, Churchill, is lightly amused. This image entailed two important messages. First, the “Allies” were assured of their victory in Europe. In just three months’ time, Germany would surrender. This was an important messages given promises that the war would end sooner, then later. Yet the image also signaled that the “Alliance” would continue after the war in rebuilding Europe. The image thus entails an element of hope far removed from the ones taken in 1919.

Since WW2, international conferences have become far more common. Advancements in transportation technology see leaders meet one another on a regular basis. Aside from state visits, there are global summits such as the G7, G20 and UN gatherings, not to mention issue specific conferences such as climate change. Images of world leaders shared online tend to focus on two messages. The first is a diverse, but united world. Images from the G20 now include women as well as leaders from the Arab World, South America and Asia. In these pictures, shown below, leaders stand optimistically shoulder to shoulder ready to tackle shared challenges. Notably, the stern white faces of 1919 are long gone.

Global summits also generate images of ‘leadership in motion’. These images tend to focus on a group of leaders huddled, trying to push forward a resolution or rally support for a foreign policy goal. Unlike the images above that illustrate a diverse world, these images as performances meant to assure global publics that someone is managing global affairs, that someone is in charge. The goal here is to reduce the anxiety felt by many around the world, a world whose balance of power is shifting and one in which truth and reality are substituted by Twitter narratives.

But what about Covid images? If leaders can’t meet, how can they solve the crisis? They can of course use telephones but the public has become accustomed to leadership in motion. To joint photos of leaders gathered around a table. In the absence of such images, how can leadership be portrayed? How can EU or Canadian citizens not fear a pandemic unwitnessed since the early 20th century.

The answer is a new form of leaders’ images- zoom images. In these photos world leaders are seen conversing with colleagues while supposedly overcoming the limitations posed by Covid. This is, after all, a digital world.

There are three attributes to such photos of leaders. First, they are always taken from the perspective of the leaders. In other words, it’s his/her Zoom meeting and he/she is managing it. This is even true of zoom G7 sessions chaired by Japan’s former prime minister.

Second, such as images are framed. That is, the accompanying text makes clear that the Tweet depicts leadership in motion. While an image says more than a 1,000 words, an unfamiliar image, of leaders in front of computer screens can be misinterpreted. This is because leaders facing computer screens give a sense of detachment and distance. Indeed, Japan is now so far away from Europe, that the prime minister can’t even travel there. The Japanese prime minister is so far away from his peers that his uses a screen. A classic and ‘framed’ tweet was recently published by the President of the EU Commission.

Third, in these images the leader is usually the speaker, not the listener. As such, the leaders is being listened to and he is focused on the task of crisis management.

Diplomatic summits are not new to the world of diplomacy. Nor are images of leaders. Yet since the mid-20th Century, the world has grown to ‘leadership in motion’. Facing an unfamiliar menace, global publics may wish assurances that leaders are leading. The new aesthetics of leaders’ images is that of Zoom. Only time will tell if these images help reduce anxiety and, more importantly, instill trust in leaders. Trust that is presently lacking in many Covid-inflicted nations.

H.E. Yahel Vilan, Ambassador of Israel to Serbia: Israel is a true startup nation in every aspect
7 May 2021

We started the “Back to Life” campaign late December with a vision to go back to life by Passover which was in early April and we succeeded Israel is a successful country in many areas, and it is also a leader in the fight against the corona virus. Serbia and Israel next year celebrate 30 years since reestablishment of diplomatic relations. What can we learn from the successful Israeli example we talked to the Ambassador of Israel to Serbia H.E. Continue reading H.E. Yahel Vilan, Ambassador of Israel to Serbia: Israel is a true startup nation in every aspect at… [...]