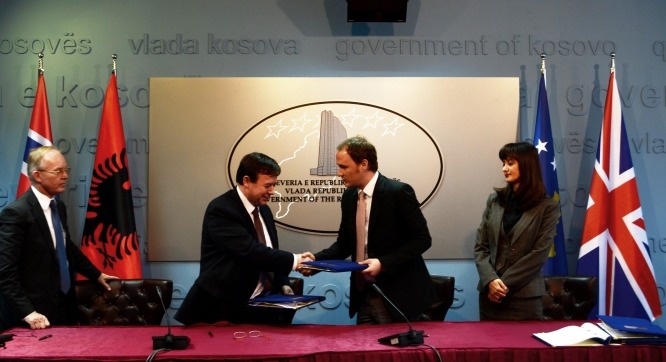 The project “Digital Diplomacy – Digital Albania and Digital Kosovo”, aimed at promoting the independence of Kosovo, the image and values “of those two countries” was signed by the representatives of the Ministries of Foreign Affairs of so-called Kosovo and Albania in Pristina on December 14, – Belgrade Initiative for Public and Digital Diplomacy reports.

‘’We are launching this Project with the intent to support the efforts of Pristina and Tirana to get the international recognition of Kosovo, as well as to promote their image in the international community through the digital diplomacy,” said Petrit Selimi, one of the signatories and a politician who has established the Pristina digital diplomacy in recent years, and made it significant and recognized in the world.
The Project on Digital Cooperation envisages to employ more than 1000 young Albanians from all over the world to spread the ‘’Albanian truth’’ through social networks with a special focus on the need to accept Kosovo in UNESCO.

Serbia should respond to this Project appropriately and ultimately with its currently non-existing public and digital diplomacy. By ignoring public and digital diplomacy, regardless of official reasons, politicians that lead Serbia would, thus, hinder the promotion of its values and principles among peoples and institutions of other countries.
The Belgrade Initiative for the Public and Digital Diplomacy reminds that the credit for the favorable UNESCO’s decision to refuse the membership to Kosovo should be given, besides the others, to Serbian volunteers, unpaid Serbian digital diplomats who put some pressure on the international public and institutions with their #NoKosovoUnesco campaign via social networks.
On October 16, 2015, the Office of the President of the Republic of Serbia, unexpectedly but very professionally, gave the impetus to this first action of the Serbian Digital Diplomacy by supporting the dynamism of the Twitter activists. Useful video material in English was even offered in order to be distributed through social networks. All those who were involved in the #NoKosovo Unesco campaign have become digital diplomats of Serbia. They are @SavaJanjic @fajgelj , @culicsimo @1NikolaMirkovic @AZobenica @nikolinamp7 @micanovic_s @SRBDiplomacy @MeettheSerbs @predsednikrs @malagurski @dijasporars @milan_maximo @nszoranans @TanjaGarcevic @nevavu @Internetnovine @BAMERC

The Serbian public has little knowledge about the fact that the Prior of the Decani Monastery, Sava Janic, is very active on social networks with his writing about the events in Kosovo and Metohija in English what is then edited throughout the world.
The Students’Office of the #No Kosovo Unesco campaign which was eastablished in Kosovska Mitrovica.on October 29, 2015, has launched new actions such as petitions to Google to display names of Kosovo places in Serbian not Albanian on its maps.
It is also unknown that false articles about Kosovo and Metohija are edited on Wikipedia, and that Belgrade is displayed as a place in ‘’Vojvodina, Serbia’’ in many mobile applications used across the world and in Serbia as well.
The Belgrade Initiative for the Public and Digital Diplomacy will continue with its actions and appeals to current digital Serbian diplomats and official institutions of the Government of the Republic of Serbia with the aim of raising awareness and importance of the use of digital diplomacy tools for Serbia and its foreign policy.

As the Ambassador of the Kingdom of Norway in Tirana and Pristina, H.E. Mr. Jan Braathu said, ‘’the Digital Diplomacy of Albania and Kosovo” Project’ ’will help change and improve perceptions of the international community towards these two wonderful countries. The true ambassadors of countries in the world are young and innovative people who, through positive writing in Wikipedia and other various websites, give their concrete contribution to the promotion of their countries in all areas, tourism, culture, environment, and so on. These young people are those who can achieve significant success, and break down the barriers that politicians and ambassadors cannot overcome’’.