[Today in PD] Vedrine And Kinkel Visit Sarajevo: The Makings Of A Public Diplomacy Disaster

We connoisseurs of the diplomatic public speaking art are fortunate to have one example of a high-profile public speaking occasion where everything that could possibly go wrong did indeed go wrong. If you are working at an Embassy or in a Foreign Minister’s office and are looking for a model for how not do it, seek no further.

We are in Sarajevo in late 1997, two years after the Dayton Peace Accords, at the Holiday Inn. During the Bosnian war this hotel had been an iconic object of attack for the Bosnian Serbs besieging the city. It had been built for the 1984 Sarajevo Winter Olympic games, a splendid example of high communist kitsch with a bright yellow facade and gruesome purple furnishings. By late 1997 those aesthetic glories of Yugoslav socialist self-management are being meticulously restored. 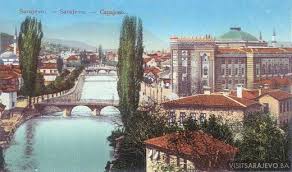 Several hundred senior Bosnian figures are gathered in the main hotel reception room, waiting for the two guest speakers. France’s Foreign Minister Hubert Védrine and Germany’s Foreign Minister Klaus Kinkel are paying a joint visit to Bosnia and Herzegovina. They want to use this occasion publicly to urge Bosnian leaders to set aside their vexing political differences and unite to rebuild the country, using generous support provided by the European Union. Forsooth, the very fact of their visit together symbolises reconciliation and partnership in modern Europe. If France and Germany can settle their historic differences, so can the Bosnians, Serbs, and Croats of Bosnia.

What can go wrong? Everything.

The audience assembles in good time for the arrival. Everyone is standing up. Drinks are served. Noisy, good-humoured conversation gathers pace.

The two speakers arrive. A more or less respectful silence descends. Minister Védrine is introduced and starts to speak in French. He has a microphone, but if there is a podium it is not especially pronounced. It is a large bland room, difficult for the speaker to dominate.

His speech meanders on. After a while people at the back of the room not unreasonably conclude that Védrine and the interpreter are saying nothing to interest them, and they start chatting quietly among themselves. This creates a disconcerting effect across the audience as a whole. Those standing immediately in front of the two speakers have no choice but to pretend to listen politely. More and more people at the back of the room decide to ignore the speaker completely and start talking. Those in the middle start to feel uncomfortable. As does Herr Kinkel, watching in dismay as the proud European message of his distinguished colleague is ignored by a small but steadily growing part of the audience.

After about 20 minutes of platitudes Védrine’s speech ends, to fitful applause. Herr Kinkel takes over. Unfortunately for him, his speech too has been written to be delivered in lengthy passages in German followed by lengthy passages in Bosnian spoken by the interpreter. This way of handling consecutive translation for a speech dooms from the start any hope of creating a sense of conversation between speaker and audience.

By now the massed Bosnians at the back of the room have given up on the occasion and are talking openly among themselves. Herr Kinkel gets visibly angry at this open Balkan disrespect for Modern Europe. He raises his voice to try to bring everyone to listen to him.

Bosnians are made of stern stuff and have long memories of Nazi atrocities in World War Two. They tend to be unimpressed when Germans talk loudly at them. The louder Herr Kinkel talks, the louder the Bosnians talk.

A ghastly sonic arms race ensues. Herr Kinkel is determined to drown out the insolent Bosnians. The bored Bosnians are no less keen to drown out that German man at the other end of the room spoiling the reception by making such an annoying noise.

My subsequent reporting telegram to London recorded this amazing scene:

“It also is striking how diplomatically ineffective our main European partners seem here. The Védrine/Kinkel visit here last week seemed to sum things up, in presentational terms at least. At the large Holiday Inn reception for the visitors with a top-level turnout of Bosnian, Serb, and Croat leaders, Védrine’s tame speech was the normal Dayton platitudes. Kinkel delivered an energetic address on the general lines of ‘We have done a lot for you! You shall be grateful! And cooperate!’ Stirring stuff, but not enough to enthuse the Bosnian audience, many of whom rudely carried on talking among themselves while it was delivered.”

All in all, a grimly instructive diplomatic fiasco.

Where the two countries’ diplomats organizing this event get things wrong? Basically, neither the Ministers’ respective offices nor their Embassies in Sarajevo had devised a formula to make sure the event would work as an event. I suspect that most of the clever effort before their visit had been devoted to crafting the words of the speech, ignoring the fact that what makes a speech successful is (of course) the words themselves but also the way in which they are delivered to the audience. Thus an audience that (perhaps for good practical reasons) is standing up needs a short, punchy speech; an audience sitting down is more comfortable and can cope with something longer and more thoughtful.

This applies all the more so if consecutive interpreting has to be used for a standing audience. A ten-minute speech by the Minister becomes a twenty-minute speech when delivered through an interpreter. This is a long time for people to stand and listen and try to absorb the words, when for precisely half the time they do not know what is being said. It is much better to format the speech so that the speaker’s words are translated sentence by sentence by the interpreter. This creates a direct sense of conversation with the audience. It keeps their minds engaged on the speaker, not on the discomfort of standing to listen.

If (as on this occasion) the politics of the event require two speakers, both using consecutive interpreting, a way has to be found to coordinate the two speeches to keep them short, sharp and accessible. Perhaps in fact only one speech is needed, with the two speakers taking it in turns to deliver different sections of it. Something like this will have novelty value, and in itself will symbolise political cooperation and high-level mutual trust. Plus the very way the speech is delivered is more likely to keep the audience interested and alert.

However, that sort of thing requires a lot of extra work, plus a sophistication and self-awareness that typically escape the high chancelleries of today’s Europe.

In all public speaking, it is not what you say—it is what they hear. In war-weary Sarajevo in 1997 many of the leading personalities in post-conflict Bosnia did not hear from these two prominent European politicians an inspiring message of unity and shared purpose. They heard disjointedness, tedium, and perhaps even irrelevance. An expensive missed opportunity.

Charles Crawford was British Ambassador in Sarajevo, Belgrade and Warsaw. He is now a private presentation skills consultant and founding partner of The Ambassador Partnership, a global corporate diplomacy panel. He tweets at @charlescrawford.

This article was originally published in the Diplomatic Courier’s January/February 2014 print edition.